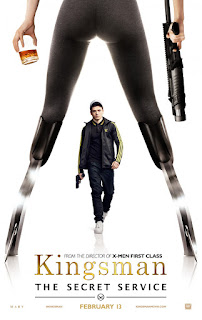 According to The Hollywood Reporter, the sequel to last year's Kingsman: The Secret Service is gearing up for a June shoot, and Julianne Moore (The Fugitive) has been tapped to play the main villain. The trade reports that Matthew Vaughn will direct again (I was kind of hoping he'd tackle his other percolating spy movie, the adaptation of Terry Hayes' I Am Pilgrim, next) and Taron Egerton (now starring in Eddie the Eagle) will once again star as Eggsy. Not returning is Colin Firth. Last year it had been rumored that Vaughn was looking for ways to bring his character back. Personally, I'd still love to see two franchises grow out of Kingsman: a series of sequels starring Egerton, and a series of prequels starring Firth.

Read my review of Kingsman: The Secret Service here.
Posted by Tanner at 11:55 PM