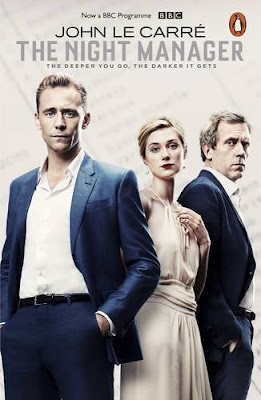 What a week of treats for John le Carré fans! Yesterday we finally got to see the first trailer for Susanna White's summer movie of Our Kind of Traitor, and today we get another look (or two!) at Susanne Bier's spring miniseries of The Night Manager! A few weeks ago we saw the BBC's trailer; today brings us a 30 second Hugh Laurie-centric spot from American production partner AMC... along with a completely different minute-long trailer from AMC Asia, which for my money is the best one yet. The Night Manager stars Laurie (MI-5, The Gun Seller), Tom Hiddleston (Marvel's The Avengers), Elizabeth Debicki (The Man From U.N.C.L.E.), Olivia Colman (Broadchurch), David Harewood (Homeland) and Tobias Menzies (Casino Royale).

According to an article in today's Guardian, "Laurie said at a recent screening of the drama that many years ago he had unsuccessfully tried to buy the rights to the book. His aim had been to play the hero, Pine, because the story was 'so romantic, noble, stirring and thrilling.'" More than twenty years later, Laurie is now playing the antagonist, Roper, instead. I could have seen him as Pine in the Nineties, but honestly, I think he'll make a much better Roper! Laurie was actually such a fan of le Carré's 1993 novel that he's credited it as the inspiration for his own rather wonderful spy novel, The Gun Seller. While it gently sends up the genre in general, The Gun Seller is mainly a comedic version of The Night Manager. (And The Gun Seller would still make a great movie! I've wanted to see that filmed ever since first reading it when it came out. Unfortunately Laurie is probably too old now to convincingly play the hero, but it could still be great with the right casting.)

Hi, looking forward to this myself.

The Guardian has a fascinating article by John Le Carre about his experience of his books being adapted for film and TV - there's quite a bit about The Night Manager, as well as Tinker Tailor and the Richard Burton film of The Spy Who Came In From The Cold: