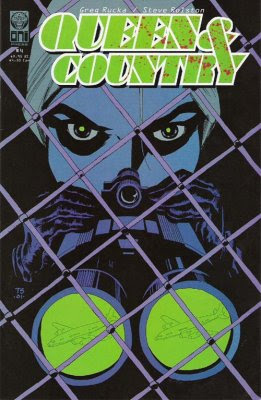 Every couple of years we Queen & Country fans get another little nugget that maybe Greg Rucka is planning another comics series, or maybe something's happening with the forever stuck in development movie. Last week was time for the latest movie rumors. The Wrap reports that powerhouse director Ridley Scott (Body of Lies, Adam Adamant Lives!) is in talks to direct it for Fox. The Hollywood Reporter has confirmed the story.

For those who don't know, Queen & Country is a multi-media spy series by Greg Rucka, spanning a comic book series (handily collected now in four omnibus editions) and three novels. It's heavily inspired by the incredible Seventies TV series The Sandbaggers, but also distinctive in its own right with a cast of terrific, believable, flawed characters. Foremost among them are SIS field agent Tara Chace and her boss, spymaster Paul Crocker, representing, respectively, the field and desk sides of the story. As with The Sandbaggers, Crocker's bureaucratic and political entanglements back at HQ are equally compelling (if not more so) to Tara's life-and-death struggles in Iran, Iraq, Saudi Arabia, Georgia, Uzbekistan, and other international hotspots. Queen & Country was one of the main inspirations for me in starting this blog, and the subject of my fourth ever post on the blog's first day of existence nearly twelve years ago, in which I called the series "the best current, ongoing spy saga in any medium." Sadly it hasn't been current for years (the last novel was published in 2011, and only a few more comic issues trickled out after that), but it remains one of the genre's all-time high water marks. And I would love to see Tara and her cohorts on the screen. Yet we've heard enough sporadic updates on that adaptation before over the years that I can't help remain skeptical until the cameras actually start to roll--or at least until the studio sets a start date.

Originally, Leverage creator John Rogers penned the script, and at one point Nicole Kidman was attached to star. Later, Ryan Condal (creator of the TV series Colony) came on board to write a draft. In 2013, Ellen Page was attached to star, hot off of Inception and Juno. A few years ago, Seth Meyers (a vocal fan of Queen & Country, who has also discussed the comic with fellow enthusiast Rachel Maddow when she was a guest) asked her if she was still attached and she said yes, but apparently that's now changed. In 2014 commercial director Craig Viveiros came aboard, but now The Wrap reports that "neither [Page nor Viveiros] is still connected to the project." According to their story, Scott, fresh off of All the Money in the World (a gritty 1970s period piece in which Mark Wahlberg plays a former CIA officer), is in talks to direct and produce. It's unclear from the story who the writer of note is at the moment, but their description makes it seem like his version would be based on Rucka's first Queen & Country novel, A Gentleman's Game. Previous drafts appeared to be based on the first two arcs of the comic book (again, just based on capsule descriptions in trades).

I really hope this comes to pass! Scott has the clout to finally get this movie made (though he is fickle and has abandoned other spy projects in the past, like a feature version of The Prisoner), and to attract a big star to play the plum role of Tara. In a 2007 post I chose my own fantasy cast and picked Kelly Macdonald (Trainspotting, Boardwalk Empire) as my ideal Tara, but she probably doesn't have the star wattage to get the film greenlit, and Scott may wish to cast younger. I think either Emily Blunt (Charlie Wilson's War) or Saorise Ronan (Hanna, Lady Bird) would be great choices. I still see Hugh Laurie (The Night Manager) as the only possible Crocker!