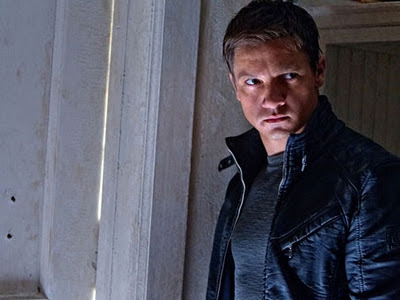 USA Today (via Dark Horizons) has published what I believe is the first photo of Jeremy Renner as the new Bourne... or the non-Bourne star of the new Bourne movie, I should say, which doesn't make a whole lot of sense. (I really wish Tony Gilroy had just had him step in as the same character Matt Damon played. It worked fine for James Bond!) Dark Horizons reports that Renner's secret agent is named Aaron Cross. Well, whatever he's called, I'm very excited to see Renner take over that franchise after he impressed me in Mission: Impossible - Ghost Protocol. And that picture certainly conveys a Bourne-like badass superspy. As previously reported, the new film co-stars Rachel Weisz, Edward Norton, Oscar Isaacs, Albert Finney and Joan Allen.

The Bourne Legacy opens August 4.
Posted by Tanner at 9:26 AM