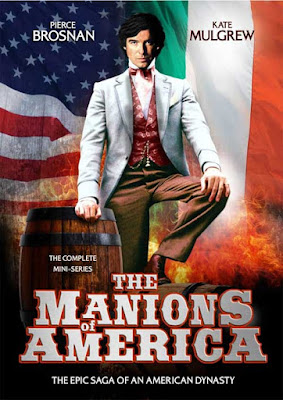 ... and very shortly, I'll be able to, thanks to eOne Entertainment. TV Shows On DVD reports that eOne will release the 286-minute 1981 miniseries about the Irish immigrant experience in America as a 2-DVD set on February 28. The SRP is $29.98, though it can currently be pre-ordered on Amazon

for slightly less than that. Brosnan (around the time that Cubby Broccoli supposedly commented on the set of For Your Eyes Only that "if that man can speak with a British accent, he's our next James Bond" or something to that effect) co-stars with Kate Mulgrew (Remo Williams: The Adventure Begins), Linda Purl (Under Cover - hm, there's one I'd like to see on DVD) and Simon MacCorkindale (The Riddle of the Sands, Counterstrike - and there's another!).
Posted by Tanner at 1:26 AM

I am desperate to see Counterstrike in DVD form. That was my favorite as a kid, and watching it in pieces on YouTube just doesn't cut it.

I remember Counterstrike airing Sunday nights on the USA Network. I didn't like the changes they made for the third season, but it was a decent show. I never did see how it ended.

Well I looked up Counterstrike on IMDB only to sadly discover that star Simon McCorkindale passed away last year.

Are you telling me there isn't a better photo of Pierce to use from that mini-series than Photoshoping his head on someone else's body?