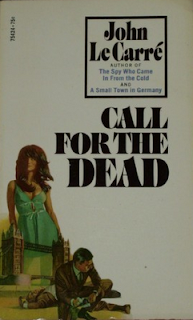 Part 3 of an ongoing series, "The Smiley Files," examining the career of George Smiley in literature and film. Read my introduction to Smiley here.

When new readers pick up a John le Carré book, chances are they’ll opt for The Spy Who Came in from the Cold or Tinker, Tailor, Soldier, Spy, or one of the new ones. Few will automatically reach for the author’s first book, the far less famous Call for the Dead. And in some ways, perhaps, that’s wise. Tinker, Tailor is a much richer book, and more likely to hook a new reader for life on le Carré’s writing. But there are good reasons to consider Call for the Dead as well. In fact, while Tinker, Tailor stands pretty well on its own, I would strongly advise reading Call for the Dead before The Spy Who Came in from the Cold. At the very least, Call for the Dead makes an essential prequel to that more famous novel, which directly follows events in the author’s first book. But it’s actually much more than that. Call for the Dead is a terrific spy novel in its own right, and as confident a debut novel as I’ve ever read, laying bare the promise of the phenomenal career to come. At a slight 150 pages or so, it’s also a very quick read and a great primer on the serious side of the spy genre that won’t require a serious investment of time. 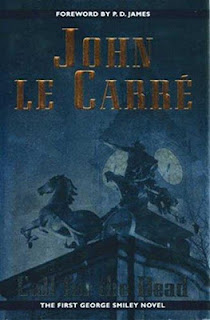 Call for the Dead opens with a chapter entitled “A Brief History of George Smiley,” and, indeed, it’s the most concise such biography we ever receive of the character in all nine books in which he features. Almost all the characteristics we’ll come to associate with Smiley are already in place right from the start. (I say “almost” because I don’t think he actually begins polishing his glasses with the “fat end” of his tie until Tinker, Tailor, Soldier, Spy.) The bad clothes, the weight problem, the myopia, the passion for Baroque-era German poetry, the equally-placed disdain for both Soviet Communism and British Bureaucracy, the perpetually straying wife and, above all, the brilliant mind—all present and accounted for. His wife, Ann, in fact, has already left him—for a Cuban race car driver, this time. As in most of the Smiley novels, she’s very much a presence throughout the book, constantly on his mind, but not actually physically present. Honestly, that’s too bad. I saw the 1966 film adaptation (which was retitled The Deadly Affair) long before I ever read this book, and it was a definite improvement on the part of screenwriter Paul Dehn (Goldfinger, The Spy Who Came in from the Cold) to integrate Ann and her wayward ways into the story. (There’s certainly evidence that le Carré thought so, too, as he eventually appropriated significant portions of Dehn’s Ann plotline into Tinker, Tailor.) Of course, it’s more possible to have a character weigh heavily on another character’s mind in a book than a film, and there’s no doubt in the novel as to how much she means to Smiley.

Call for the Dead opens with Smiley well past his wartime prime, toiling away in petty administrative duties in the vast bureaucracy of the Circus (le Carré slang for British Intelligence), reviewing the files of potential traitors and updating their security clearance. The Circus received an anonymous letter reporting that a Foreign Office employee named Samuel Fennan had been a member of the Communist Party in his pre-war University days. Smiley is obligated to follow up on this, and suggests to Fennan that they conduct their interview in the park so as not to cause Fennan any embarrassment by meeting in his office. The interview goes smoothly, Smiley finds himself liking Fennan, and he concludes that no action is necessary; after all, “half the Cabinet were in the Party in the thirties.” All seems well. Then that night he’s awakened with a call summoning him into the office at an ungodly hour for a meeting with his fastidious, incompetent, politically-fixated boss, Maston. (Maston is known officially as “the Adviser,” a title we later learn preceded Control as functional head of the service, but better known among rival departments as “Marlene Dietrich” owing to his drama queen tendencies.) Maston is panicked. Fennan is dead, and there’s a suicide note blaming Smiley and the Circus for harassing him. 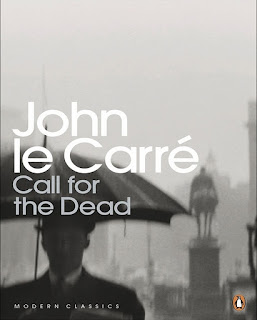 Smiley can’t understand it. His report completely exonerated the man, and their meeting ended on a positive note. Was Fennan really a spy after all? Maston doesn’t care. He just wants Smiley to smooth over the whole thing before it comes back to reflect badly on the Circus at Whitehall. Smiley is duly dispatched to the home of Fennan’s widow, Elsa. She tells him a story completely at odds with his own impression of the previous day’s events, and says that her husband was a wreck when he came home that night, driven to that state by Smiley’s persecution. Smiley’s inclined to believe her and wondering how he could have been so wrong in his interpretation of the meeting with Fennan when the phone rings. Smiley answers, expecting it to be Maston. Instead, it’s a wake-up call from the telephone exchange (I guess that used to be a regular service?), ordered by Samuel Fennan: the titular call for the dead. Suddenly, the widow’s story doesn’t add up anymore. Why would a man planning to kill himself order a wake-up call for the next morning?

Smiley teams up with Mendel, a Special Branch detective on the verge of retirement who will recur throughout the series, to answer that question. The Adviser doesn’t want it answered. He wants the whole affair wrapped up as quickly as possible with minimal embarrassment for the Circus. Smiley is so outraged that he quits the Circus (the first of many such occasions), and decides to pursue the investigation on his own with the aid of Mendel and his former colleague, Peter Guillam (fated to be another recurring character), who provides crucial information from inside the secret service that Smiley’s no longer privy to. That innocuous phone call will lead this trio on a perilous quest involving East German spies, the London underworld, more murders, and specters from Smiley’s wartime past. It will also land Smiley in the hospital, the victim of a vicious attempt on his own life—and see him grappling in another brutal, life-or-death struggle atop his very own Reichenbach Falls. Yes, it's all a bit more physical and a bit more of an adventure than one might expect of George Smiley! 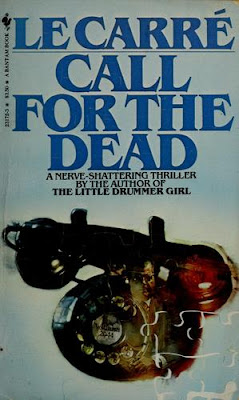 All of the characters are richly drawn, from Mendel to Elsa Fennan to bit parts like Adam Scarr, the polygamist chop shop owner who puts Smiley and his pals on the trail of the blond German spy Hans-Dieter Mundt, a sadistic figure who will play a much larger role in The Spy Who Came in from the Cold. We care about these people. The characters ring so true, in fact, that le Carré doesn’t need to provide the intricate, twisting sort of plot that will characterize his future work—or the far-out sort of spectacle that Ian Fleming would dream up. Call for the Dead is a very down-to-earth spy story (though not without action), a procedural whose fascination lies in the wholly believable secret world it sheds light on and in the equally believable human beings who inhabit that world. It may be slight—both in scope and length—compared to the author’s later novels, but it nonetheless serves as a perfect introduction to George Smiley and his world—and to the wider oeuvre of John le Carré. If Tinker, Tailor, Soldier, Spy is the perfect Smiley hardback—a dense, challenging work to be read and pondered in a favorite armchair—I would call Call for the Dead the perfect Smiley paperback—a fast thriller to be consumed quickly on a long commute.

More than five years after writing this review, I revisited Call for the Dead in a discussion with Shane Whaley on the Spybrary podcast. Listen to that here.

I love the book, but beyond seeing 60s London and basking in a nostalgic glow I have little time for The Deadly Affair.