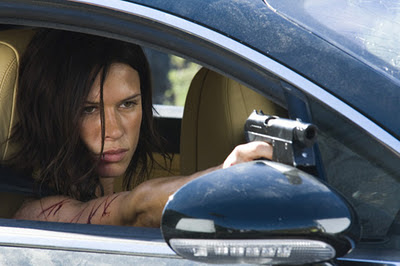 Deadline reports that British actress Rhona Mitra will join the cast of Cinemax's Strike Back next season. (If you haven't watched the first season yet, though, you might not want to click on that link, as the trade blog's story contains plot spoilers.) Mitra is probably most famous as the model for Lara Croft in the Tomb Raider videogames during the height of their popularity, though more recently she's starred in films like Doomsday and Underworld: Rise of the Lycans and the short-lived TV show The Gates. She's got some spy experience under her belt, too, having appeared in a small role in the Mark Wahlberg movie Shooter (review here), and in an episode of Barry Sonenfeld's flash-in-the-pan 2000 spy show Secret Agent Man (which was not a remake of ITC's Danger Man aka Secret Agent, despite sharing its theme song with that show's American title sequence). The new season of Strike Back starts shooting soon in South Africa.