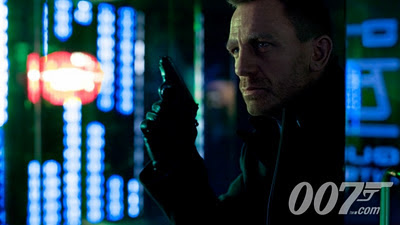 Though Empire previously touted an image of Daniel Craig from behind in another tiny blue swimsuit sitting at the edge of a blue-lit pool as the first official still from the 23rd James Bond film, SkyFall, the producers apparently didn't consider that to be the case. Officially, this image revealed today on 007.com is the first still from SkyFall. It's certainly more traditionally Bondian: we have an exotic location (Shanghai), a classic pose and a classic gun. A purist at heart, I'm glad to see Bond packing the Walther PPK again, even if it is an impractical antique, as some firearms enthusiasts claim. The return to the PPK was one of the few good things Mark Forster brought to Bond on Quantum of Solace. But this image isn't all traditional! Glaringly non-traditional for James Bond is the beard Craig sports. It's not a surprise, since we've already seen paparazzi shots of a bearded Craig filming in London, but it's still sort of jarring to see it in an official, purposefully composed photo. Previously, Bond has only ever sported a beard (of the Robinson Crusoe variety) after a period of long captivity in North Korea at the beginning of Die Another Day. Unlike that one, this neatly-trimmed facial hair appears to be a purposeful choice on Bond's part, and not the result of lengthy torture. As non-traditional as it is, I'm not against the beard... just commenting on its irregularity. Craig pulls it off... and manages to still look very Bondian. We know, of course, from other set photos, that the actor does not have a beard in every scene in SkyFall. I'm curious to learn its purpose and its placement in the film. All told, this is a pretty cool picture. And I like that that logo at the bottom kind of makes it look like a trading card. You can see it in super-high resolution on the official website.
Posted by Tanner at 9:29 AM

Pierce Brosnan sported a Robinson Crusoe beard in Die Another Day. I like Craig but he's just not Bond to me. He acts more like a thug than James Bond.