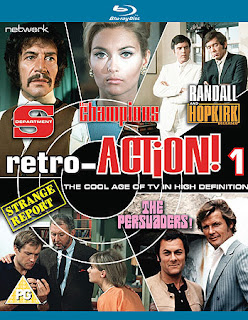 After skipping it last year (as I recall, anyway), Network is back to having a late-January (and early February) sale! Unfortunately, it doesn't appear to include their web exclusive titles (like Tightrope, Spyder's Web and The 4 Just Men); those have been taken off the site for the duration of the sale. But there are still plenty of great bargains to be had on Region 2 and Region B spy titles, including the feature-packed Blu-ray Persuaders! set and the Retro-Action BD titles, samplers which include one high-def episode each from such ITC classics as The Saint, Danger Man, Man in a Suitcase, Department S, The Baron, The Champions and more. All of the companies previous DVD collections of those shows (the non web-exclusive ones, anyway) are also on sale, many of them including slews of bonus material. This sale is also a good opportunity to pick up some of the company's excellent spy TV soundtrack sets, including The Saint (review here), The Music of ITC, and my personal favorite, Man in a Suitcase. They're all 40% off! But hurry, because the sale ends tomorrow, February 2.
Posted by Tanner at 6:04 PM

Surprised you didn't mention the £40 shipping charge if you live in the US. That's what prevents me from taking advantage of the sale.