This catch-up post keeps growing longer and longer the more it keeps getting put off. I missed quite a few weeks of new spy DVDs in January and February, and in hopes of getting back on track for weekly Tuesday posts, here's a great big roundup of some choice titles from the past month and a half. 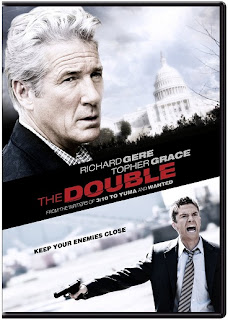 The Michael Brandt/Derek Haas spy thriller The Double, starring Richard Gere, Topher Grace and Quantum of Solace's Stana Katic, received a limited theatrical release last fall on its way to a DVD debut at the end of January from Image Entertainment. Consequently, it's probably new to most spy fans on DVD, and comes with an impressive pedigree: The Double was penned by the writers of 3:10 to Yuma and Wanted (as well as the as-yet-unproduced spy movies The Matarese Circle and Matt Helm).
The DVD and Blu-ray hit stores a few weeks ago. Extras include a commentary with writer Haas and writer/director Brandt, producer interviews, and a reportedly spoiler-filled trailer. Here's the studio's description of the film:


When a United States Senator is brutally murdered, the evidence points to a Soviet assassin code-named Cassius, who was long-thought to be dead. Two men who know Cassius best are thrown together to catch him. Paul Shepherdson (Richard Gere, An Officer and a Gentleman) is a retired CIA operative who spent his career tracking Cassius around the globe. Ben Geary (Topher Grace, Spider-Man 3) is a hotshot young FBI Agent and family man who has studied the killer's every move. Ben thinks he knows Cassius, but Paul knows he is dead wrong. Now, time is running out to stop this merciless killing machine before he finds his next target. Martin Sheen (The Departed), Odette Yustman (Cloverfield) and Stana Katic (Castle) costar in this tense thriller from the co-writers of Wanted and 3:10 to Yuma that will keep you guessing until the very last shot. One of the weirdest and coolest corners of the spy genre has to be the decidedly odd fumetti and fumetti neri subgenre of the mid-to-late Sixties, an offshoot of the Eurospy movement which found the Italian James Bond wannabes dressing up in tights and masks. (The Fantastic Argoman and Diabolik are prime examples; you can read all about them and others of their ilk in my Costumed Adventurer Week recap.) Hollywood stunt man-turned-director Scott Rhodes very obviously shares my affinity for this unique marriage of spy and superhero, and as I first wrote about last summer when the series debuted, he's single-handedly revived it with his web series homage to the likes of Superargo and Argoman, The Adventures of Superseven! (No direct relation to the eurospy Super Seven - two words - who liked to call Cairo.) Hopefully you've already seen Superseven in action on YouTube, but if you haven't, the web series' entire first season is now available on DVD! And it's brimming with special features, too, including interviews, behind-the-scenes footage, bloopers, and even a gallery of artwork designed in the style of Sixties lobby cards by my fellow spy blogger, Permission To Kill's David Foster. Superseven is a very entertaining series with impressive production values and acting, sure to thrill fans of Sixties Eurospy and costumed adventurer movies. The 2-disc set can be ordered for $14.99 plus $3 shipping and handling directly from the Superseven website. Stay tuned in the coming week or so for an interview with Scott Rhodes and a chance to win this DVD! 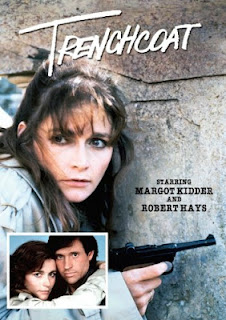 Disney has released the cult favorite 1983 Margot Kidder spy movie Trenchcoat on DVD as part of their made-on-demand "Disney Generations" line. Trenchcoat, which also stars Robert Hays and features Raiders of the Lost Ark's Ronald Lacey and Poirot's David Suchet in smaller parts, caused a bit of controversy when it came out in 1983, as it was the first film Disney had aimed specifically at the adult market. (Not that it's that adult, but it's not designed for kids.) Ultimately it led to the creation of the Touchstone brand so the studio could differentiate such fare. Kidder stars as a mystery writer who goes on vacation in scenic Malta (another undeniable star of this show) and finds herself caught up in a web of international espionage and terrorism, where no one is who they seem to be. It's long been demanded on DVD by its fans, so this release is sure to please quite a few people. Now I hope Disney uses their Generations label to put out a few more of their 80s spy capers, like the 1987 Walt Disney's World of Color TV movie Double Agent, starring Michael McKean (which I saw on the same day I first saw Thunderball - and I preferred the Disney movie!*), or perhaps a reissue of the long out-of-print latter-day fumetti Condorman, with Bond Girl Barbara Carera. 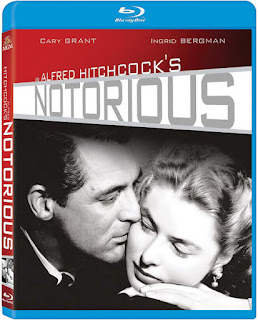 Alfred Hitchcock's 1946 spy masterpiece Notorious made its Blu-ray debut a few weeks ago courtesy of Fox and MGM. Besides an impressive HD transfer (really, I don't know what some Amazon reviewers are complaining about), the Blu-ray boasts two commentaries by film historians, an isolated music and effects track, "The Ultimate Romance: The Making of Notorious" featurette, "Alfred Hitchcock: The Ultimate Spymaster" featurette (a must-see for fans of the genre), an AFI Tribute to Hitchcock, a 1948 radio play starring Joseph Cotton and Ingrid Bergman, a Peter Bogdanovich audio interview, a second audio interview with François Truffaut quizzing Hitch on a number of subjects including both Notorious and the auteur's earlier spy movie Sabotage, a restoration comparison and a still gallery. Retail is already a bargain at $24.99, but, unsurprisingly, it's significantly less on Amazon. 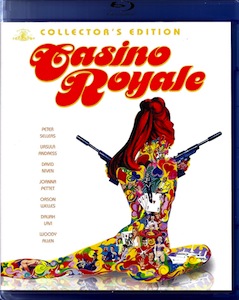 After an extraordinarily prolonged drought, another James Bond movie materialized on Blu-ray a few weeks ago... but not, I'm afraid, one of the titles that many fans have long been hoping for, like The Spy Who Loved Me, You Only Live Twice or On Her Majesty's Secret Service. (We'll finally see those in high-def as part of a massive 50th Anniversary box set this fall.) Instead, Fox and MGM have made the 1967 spoof version of Casino Royale widely available. The title was previously available on Blu only as a Best Buy exclusive. Casino Royale '67, starring David Niven, Woody Allen, Peter Sellers and Orson Welles (among many others), can now, at last, be found everywhere (including Amazon). The SRP is $19.99, and the disc contains the same extras available on the last DVD edition: an audio commentary with Bond historians Steven Jay Rubin and John Cork, the original theatrical trailer, and a five-part documentary produced by Rubin on the unbelievable behind-the-scenes shenanigans that went on during the making of Casino Royale. 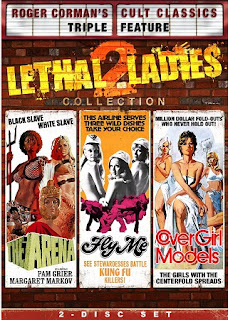 The latest in Shout! Factory's series of multi-DVD set reissues of out-of-print Roger Corman exploitation movies, Lethal Ladies Collection: Volume 2, includes the low-budget Seventies spy movie Cover Girl Models. According to the studio copy, "a fashion photography assignment teams three American models and inadvertently plunges them into the mystery and danger of international espionage. When an invaluable roll of microfilm is sewed into one of the girls’ fashion gowns, they are drawn into the violence and intrigue of a spy-vs.-counterspy conspiracy." It's all just an excuse for T&A in cheap Manila locations, of course, but that's the Seventies for you. Cover Girl Models was previously issued on a Region 1 disc from Televista for Latin American companies. The Shout! set also includes the stewardesses-vs-hijackers movie Fly Me and a most welcome reissue of the long unavailable (and very pricey on the collector's market) Pam Grier gladiator classic The Arena. Extras include trailers and TV spots as well as all the Arena special features from the out of print New Concorde DVD, plus a new director's commentary on that one. Retail is an affordable $24.97 for the 2-disc set.

*Of course I was 10, and haven't had the opportunity to see it since. It's probably terrible.
Posted by Tanner at 11:43 PM