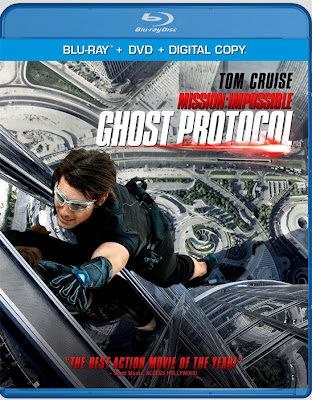 DVD Active reports that Paramount will release the latest (and by far the best!) entry in the Mission: Impossible film series, Mission: Impossible - Ghost Protocol, on home video on April 17 in three configurations: single DVD ($19.99), a 2-disc Blu-ray/DVD Combo ($29.99) and a 3-disc Blu-ray/DVD Combo ($34.99). (Those configurations don't quite match up with Amazon's current listings, though, so it's possible they might change, or that one might be a Best Buy exclusive or something.) If you like special features (or if you want the cool cover), that last one's the version you want. It will come with trailers, deleted scenes with optional commentary by director Brad Bird, and 13 featurettes: "The Sandstorm," "Props," "Heating Up In Dubai," "Vancouver Fisticuffs," "The Russian Prison," "Shooting in IMAX," "Art Department," "A Roll of Film," "Life Masks," "Stepping Into the Storm," "Dubai Car Crash," "Lens on the Burj" and "Composer." The DVD will include the deleted scenes and two of the featurettes; the 2-disc combo will include the deleted scenes and four of the featurettes. For me, there's no question: I loved the movie (it tied as my favorite spy film of last year, in fact), and I want to see all the behind-the-scenes material I can! I only wish Bird had contributed a feature commentary as well. I wonder if one of those deleted scenes includes that awesome indoor ski resort in Dubai where we heard they shot, but which didn't make an appearance in the finished film? Hope so! 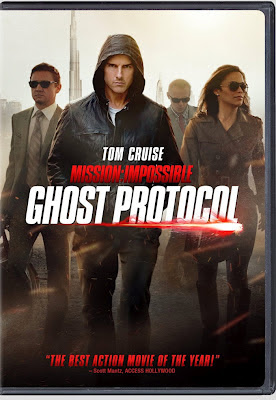