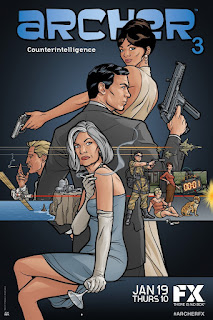 According to the Hollywood Reporter's Live Feed, FX has renewed its hit animated spy comedy Archer for a 13-episode fourth season. FX Productions has also signed a deal extending Archer executive producers Adam Reed and Matt Thompson's deal for another two years. Their extended deal guarantees their involvement in future seasons of Archer if it ends up renewed again, which seems likely, given that it keeps rising in the ratings. “It was an easy decision to order more Archer,” FX EVP of Original Programming Nick Grad told the trade. “Adam, Matt, and our amazing voice cast are delivering one of the funniest and smartest shows on television. It has deservedly grown beyond its initial cult following to become both a critical and ratings success. It is a true asset to the FX comedy roster.”
Posted by Tanner at 11:12 PM

I stopped watching after a few episodes. The animation is awful.

I love, love, LOVE the highly-stylized animation and design work on this show, which draws brilliantly from every great era of Cold War spydom.

Fantastic show - I tell everyone I know to check out Archer.

Ever since Archer enjoyed having sex with Pam, the show lost all credibility.