The Man From U.N.C.L.E. Movie Hits Blu-Ray November 17 With No Commentary, but Plenty of Extras 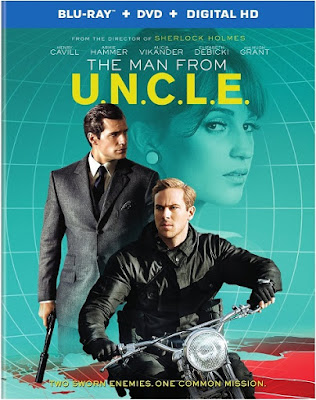 Guy Ritchie's 2015 feature film version of The Man From U.N.C.L.E. hits stores as a Blu-ray/DVD combo on November 17 (still ingrained in my mind twenty years later as "GoldenEye Day"). The disc includes an Ultraviolet HD digital copy and a number of special features... but sadly no audio commentary. I was looking forward to hearing what Ritchie and his stars had to say, scene by scene. Happily, the release is far from bare-bones, with a number of special features. These include:

- The Guys From U.N.C.L.E. - a part-making-of, part-travelogue, all-attitude look behind the curtain.
- Spy Vision: Recreating '60s Cool: The music, the clothes, the design, the cars... the '60s have always been the coolest era.
- A Higher Class Of Hero
- Metisse Motorcycles: Proper - And Very British
- A Man of Extraordinary Talents
- U.N.C.L.E: On-Set Spy
- Don't Swim Elegantly
- You Want to Wrestle?
- Heli Restored
- A Family Thing

I like that the cover art incorporates the globe design from the TV series logo, and I like that it doesn't use the subpar theatrical 1-sheet artwork. The Man From U.N.C.L.E. Blu-ray/DVD/Ultraviolet Combo Pack

comes out November 17 and retails for $44.95, but of course you shouldn't have to actually pay that much anywhere. It's available for pre-order on Amazon much cheaper.