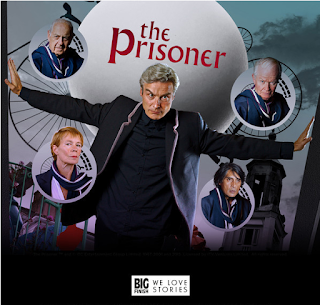 Big Finish, the production company behind the excellent audio dramas based on the lost first season episodes of The Avengers, has officially announced the voice cast of their upcoming Prisoner project, which the company is now referring to as an "audio revival." The identity of the actors, in particular the star, had been kept under wraps when the company released the teaser last month. Mark Elstob, a stage actor best known for his performances in Sir Peter Hall’s "Hamlet" and Octopussy villain Steven Berkoff’s "Salome" (as well as a stint on Emmerdale), will play the lead role of Number 6, the character originated on the classic Sixties TV show by Patrick McGoohan,

Writer/director and producer Nicholas Briggs claims to have "looked further and wider than [he'd] ever done for any Big Finish casting" to find the right man to step into McGoohan's shoes. I hope he's right in his ultimate decision! I was unconvinced by the snippets we heard in that teaser, but I'd like to be proven wrong. Julian Wadham set the high water mark with his performance as Steed in The Avengers, which was simultaneously fresh and respectful of Patrick Macnee's legacy. I hope Elstob manages the same feat. According to Briggs, Elstob is a massive fan of the original series.

Following the template established by the TV show, the audio series will feature a series of different actors taking on the authority figure in The Village of Number 2. In the first batch of episodes, Number 6 will match wits with John Standing (V for Vendetta), Celia Imrie (Highlander), Ramon Tikaram (My Spy Family) and Michael Cochrane (The Iron Lady).

According to the Big Finish announcement, "Other inhabitants of The Village include Sara Powell as Number 9, Kristina Buikaite as Number 8 and Jez Fielder as Number 17 — with Helen Goldwyn as the Village Voice, Jim Barclay as Control and Barnaby Edwards as Number 2’s diminutive butler. Sarah Mowat plays the role of Zero-Six-Two, a former accomplice of Number 6."

The Prisoner: Volume 1 comes out in January 2016 and is available to pre-order now on the Big Finish website as a CD set or digital download. The debut set contains four one-hour episodes, a Behind-the-Scenes audio documentary, and (in the physical version) a lavish color booklet.
Posted by Tanner at 1:01 AM

I think Big Finish will do a good job. As for the leading man, I think it is nearly impossible to come anywhere near Patrick McGoohan, certainly in the way he sounds and probably in every other aspect too. McGoohan is so indelibly etched in people's minds.

The supporting staff look great (Standing, Cochrane and Imrie) and I can already imagine them in their roles.