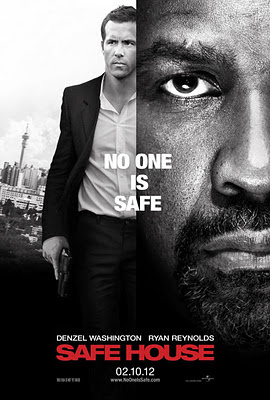 As evidenced by its poster, which duplicates The Bourne Ultimatum’s 1-sheet so precisely (see them side by side here) that if the two films weren’t from the same studio it would be a clear case of plagiarism, Daniel Espinosa’s Safe House desperately, desperately wants to be a Bourne movie. Or at least it wants you to think it’s a Bourne movie. Ultimately, though, while it succeeds in keeping its audience entertained for two hours they probably won’t miss, it becomes painfully clear that it’s not a Bourne movie, that star Ryan Reynolds is not Matt Damon, and that (as we’ve seen demonstrated time and again since 2004), few if any directors besides Paul Greengrass are capable of pulling off quick-cut, shaky-cam action scenes and making them thrilling to behold rather than confusing and unspectacular.

There are good moments in Safe House, but none that spy fans haven’t seen at least a dozen times before. In a genre as repetitive as the spy genre is (let's be honest), filmmakers generally have two routes to go. Either they can present something original amidst the expected tropes (even This Means War at least offers a fresh twist, even if it fails to pull it off), or they can follow the paint-by-numbers pattern established by the Bond movies and Hitchcock and tweaked over the years by the likes of Robert Ludlum and Paul Greengrass—and do it so well that nobody cares. (Mission: Impossible – Ghost Protocol is a perfect example of the latter sort of success.) Espinosa and screenwriter David Guggenheim, unfortunately, do neither. They merely recycle the familiar and do it in a generally inferior fashion to what we’ve seen before. Perhaps I’m more critical because I (like most readers of this blog, I'd hazard) have seen more spy movies than the average moviegoer, but then again that means (as regular readers are well aware) that I have an extremely high threshold for spy clichés. If you’ve got safe houses and moles and car chases and shootouts, I’m really not that difficult to please. 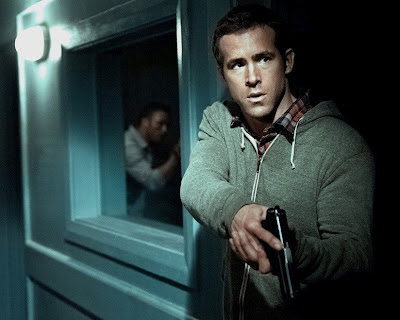 Reynolds plays Matt Weston, the “housekeeper” (one of many terms in the film borrowed from le Carré) of a CIA safe house in Johannesburg, South Africa. This isn’t the sort of safe house we’ve read about in Deighton or le Carré (boring, nondescript apartments with second-hand furniture and grim, government-style décor); this is a high-tech establishment that truly lives up to the name (or should live up to it, anyway; when its big moment comes, though, it offers little protection). There are multiple passages within it that look designed by an acolyte of Ken Adam rather than a civil servant, a whole series of heavy security doors activated by various personalized means, interrogation cells and, of course, a room full of high-tech weaponry. Despite having this tricked out house to keep (though for some reason he doesn’t live there), Matt is bored stiff. Nothing ever happens in Joburg; no one needs the safe house. Until…

One night, after a day spent complaining about this dead-end job to his superior in Langley (Brenden Gleeson) and his girlfriend in Johannesburg (Nora Arnezeder, to whom he must express his frustrations couched in the terms of his cover profession, as she doesn’t know he’s a spy), Matt’s dull routine is suddenly interrupted by the arrival of a CIA black ops team (led by Robert Patrick, of course) transporting a high-value prisoner: former star agent gone rogue Tobin Frost (Denzel Washington). Matt doesn’t really know much about Tobin Frost (you can tell how proud Guggenheim is of that name by how many times it’s spoken aloud) other than that he’s a legend and that the Agency wants him brought in, but Matt’s clearly not too comfortable about watching Frost waterboarded by Robert Patrick’s team. Washington shakes off the waterboarding as cavalierly as Daniel Craig resists Le Chiffre’s unbearable torture in Casino Royale. He has fun with this role, and consequently he’s fun to watch. Washington acts circles around not only Reynolds, but even heavy-hitting supporting players like Gleeson, Liam Cunningham (as an MI6 operative) and Vera Farmiga (as Gleeson’s colleague). Only Sam Shepherd (Fair Game) manages to match him as the crusty CIA director, but sadly the two never share a scene together. 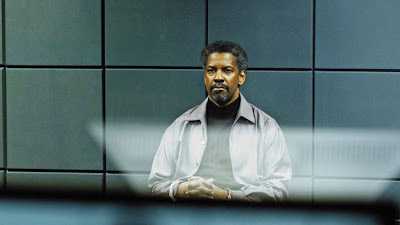 If you’re thinking that Matt might have to make some sort of big decision about following orders versus the morality of waterboarding, then you’re watching the wrong movie. Most decisions are taken out of his hands by people or vehicles suddenly crashing through walls or other vehicles, and that’s what happens here. A sinister hit squad shows up to kill Frost, has no trouble at all breaking through the safe house’s defensive mechanisms, and makes short work of the squad of elite CIA operatives. The best Matt can do is escape with Frost, and after an efficient but artless car chase, his master manipulator prisoner is inside his head, Hannibal Lecter-style, trying to convince him to let him go.

It will surprise precisely no one who’s ever seen a spy movie or a Denzel Washington movie before that it turns out that, unlike Lecter, Frost is not the big bad guy he’s built up to be, but a misunderstood idealist forced to flee the Agency when he stumbled on a truth he wasn’t meant to know. The true villain of the piece is telegraphed so loudly that astute viewers will probably spot him or her not only from the first act but from the trailer. Meanwhile, with his own true nature revealed, Washington takes a moment to shave off his bad guy beard and trim his afro, transforming into the clean-cut (and much younger-looking) Denzel we all know and love. 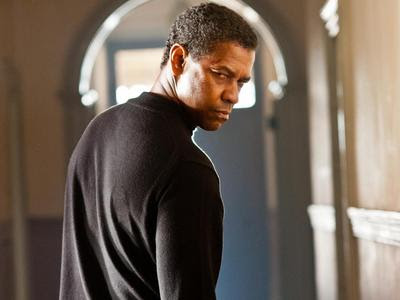 Over the course of several competently but unspectacularly staged setpieces (the best of which is a protracted shootout/chase through a district of closely-packed tenements), the novice and the pro eventually come to trust and respect each other. The ending and the coda are borrowed from Green Zone and Ghost Protocol, respectively, but not very well thought out. Given too much thought, the film appears to endorse Wikileaks-style dissemination of government secrets little with care given to the consequences of releasing such information and presumably endangering American agents, but I don’t think it’s intended to be given that amount of thought. And, honestly, as long as you don't think too much, you’ll probably find enough to enjoy in Safe House to make it worth a rental one day. Washington’s performance alone ensures that. Just don’t go into it expecting the Bourne-level thrills promised by the poster.
Posted by Tanner at 11:25 PM

I have to agree with you on this one. Storylines we have seen over and over and the big reveal at the end of the film you knew in the first five minutes. I noticed Washington was one the executive producers but he deserves better than this tedious film.