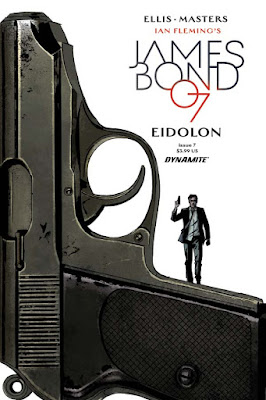 Meanwhile, Ellis's first James Bond 007 storyline, "VARGR," will be collected in hardcover this summer, in stores June 28 and available for pre-order on Amazon.
Posted by Tanner at 7:34 AM No comments:

New Trailer and Posters: Le Carré's Our Kind of Traitor 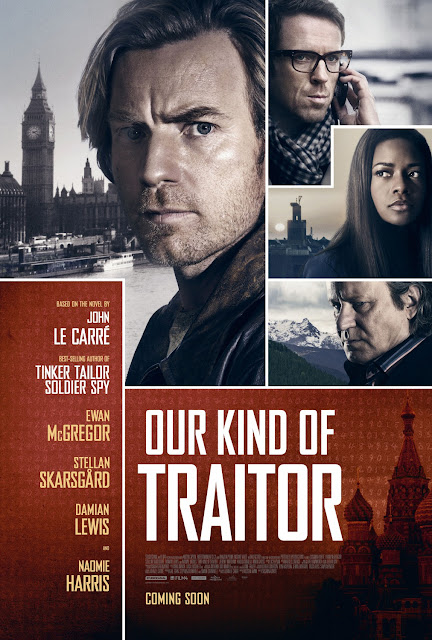 We saw the British trailer a couple of months ago; now we get our first American trailer for Our Kind of Traitor, courtesy of Lionsgate and Roadside Attractions—along with the rather uninspired U.S. (above) and UK (below) posters for the John le Carré adaptation, based on his highly entertaining 2010 novel. Ewan McGregor (Stormbreaker), Naomie Harris (Skyfall), Damian Lewis (Homeland), Mark Gatiss (Sherlock) and Stellan Skarsgård (The Hunt for Red October) star. Our Kind of Traitor opens July 1 in the United States, and May 13 in the UK. 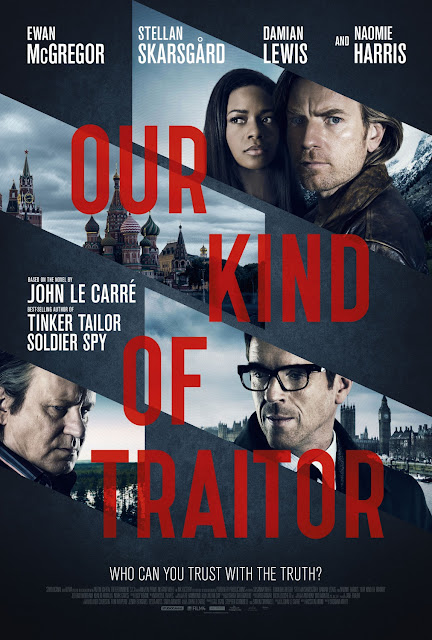 Posted by Tanner at 7:13 AM No comments: 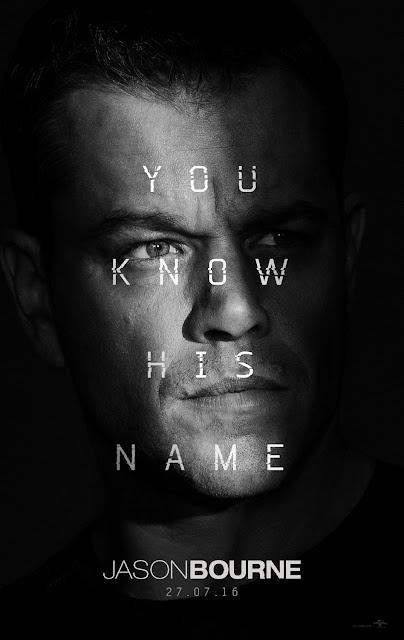 We got our first glimpse in nine years at Matt Damon in action as Jason Bourne during the Super Bowl spot for the eponymous new movie. Today, Universal has released the full trailer, and it looks pretty spectacular! Damon re-teams with his Bourne Supremacy, Bourne Ultimatum and Green Zone director Paul Greengrass, and the results are exactly what you'd expect of that team. Jason Bourne (which bodly abandons the traditional Robert Ludlum title structure) opens July 29.  Alicia Vikander (The Man From U.N.C.L.E.), Vincent Cassel (Agents Secrets), Tommy Lee Jones (Criminal) and Julia Stiles (reprising her role from previous Bourne movies) co-star.

Read my review of Paul Greengrass's The Bourne Ultimatum here. 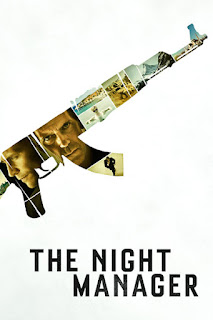 This project was first reported back in 2014, but things have been quiet since then. I'm glad to learn it's still progressing! According to The Tracking Board (via Dark Horizons), Jeremy Saulnier, who helmed the acclaimed 2014 indie feature Blue Ruin and the upcoming Patrick Stewart white supremacist thriller Green Room, is in talks to make his studio debut with 20th Century Fox's Defection. As previously reported, Defection (scripted by Black Hawk Down's Ken Nolan) is based on The Defection of A.J. Lewinter, the first novel by spy stalwart Robert Littell, whose works have also served as the basis for the TNT series The Company (with Michael Keaton) and Legends (with Sean Bean). Here's how The Tracking Board describes the project:


Cut from the same cloth as Tinker Tailor Soldier Spy but set in an Edward Snowden era, Defection tells the story of Leo Diamond, a broken down CIA case officer who uses his calculated Cold War training to go after a mid-level CIA intelligence contractor who has defected to North Korea and has taken a mysterious suitcase with him.

Littell's novel is a bona fide classic, but very, very much seeped in the Cold War period in which it was written. Relocating it to North Korea wouldn't be nearly as simple as doing a find/replace swapping "Pyongyang" for "Moscow;" it would require considerable research into the ins and outs of North Korean politics and power structures (which I'm presuming are just as internecine as they were in the Soviet Union in the Seventies). And changing the defector from a scientist to an intelligence contractor, while timely in the wake of Snowden, will also create major ramifications in the novel's plot—possibly even affecting one of the all-time great final twists in spy fiction. Just making the very play-like, talky novel cinematic would be a major challenge, so I look forward to seeing how Nolan pulls it off. Saulnier is an expert at creating tension, so I have no doubt he'll pull off this difficult page to screen transition.

At one point Brad Pitt was attached to star in and produce Defection. He's not mentioned in this report, so I'm not sure if he's involved any longer.
Posted by Tanner at 11:33 PM No comments: