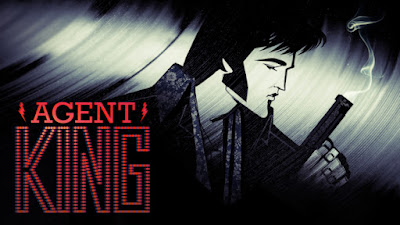 It's always struck me as so weird that Elvis never made a spy movie. I mean, the King of Rock and Roll made movies in just about every other genre, throughout the whole spy craze of the Sixties! And even worked with lots of spy actresses, like Ann-Margaret (Murderers' Row, Viva Las Vegas) Nancy Sinatra (Last of the Secret Agents, Speedway), and Ursula Andress (Dr. No, Fun in Acapulco). But now, according to Deadline, Elvis will finally get to be a spy... sort of. At least an animated version of him will star in a Netflix series, Agent King (no, not Jason, I'm afraid!), which explores the premise what if the actual Elvis Presley were actually a secret agent? According to the trade, in the series, created by Elvis's widow Priscilla Presley and singer/songwriter John Eddie, "Elvis trades in his white jumpsuit for a jet pack when he is covertly inducted into a secret government spy program to help battle the dark forces that threaten the country he loves — all while holding down his day job as the King of Rock ‘n’ Roll." Mike Arnold, who knows a thing or two about animated spy series, having written for Archer for six seasons, will be the showrunner.
Posted by Tanner at 12:02 PM No comments:

Amazon Prime debuted the first trailer today for their upcoming film The Report,  Scott Z. Burns' thriller/expose about torture in the CIA’s Detention and Interrogation Program in the aftermath of 9/11. Burns is no stranger to the subject of spies and spy agencies, with writing credits on The Bourne Ultimatum (review here), The Informant!, and next year's Bond movie No Time to Die. He also penned an unmade version of The Man From U.N.C.L.E. when Steven Soderbergh was attached to direct. Soderbergh is a producer on The Report, which stars Adam Driver, Annette Bening, Jon Hamm, Michael C. Hall, Tim Blake Nelson, Corey Stoll, Maura Tierney, and The Americans' Matthew Rhys. The Report premieres in theaters November 15th, and on Prime Video November 29th.


Finally, we can stop referring to the fifth Daniel Craig James Bond movie as "Bond 25!" (The moniker lasted far further into production than usual for the 007 films, which have traditionally been known in pre-production as Bond # ever since the producers ran out of Ian Fleming titles.) Now we can start calling the next movie No Time to Die. It has a similar ring to A Reason to Die (the title that was reportedly rejected on the eve of the Bond 25 press conference due to objections from MGM), but more history for the Bond production team.

No Time to Die is a title previously used (in some territories, including the UK) by original series producer Albert R. Broccoli on one of his pre-Harry Saltzman collaborations with producer Irving Allen, the 1958 WWII drama known in the U.S. as Tank Force. That No Time to Die was directed by Terence Young (who would obviously go on to help shape the Bond franchise, directing three of the first four Sean Connery movies), co-written by Richard Maibaum (who would receive writing credits on a dozen 007 titles), shot by Ted Moore (who would shoot many Bond movies, establishing the series' visual style for decades), and co-starred Luciana Paluzzi (Thunderball) and future "Goldfinger" lyricist Anthony Newley. Additionally, Syd Cain, who would become a fixture in the 007 art departments, had an assistant art director credit. So the title is rich with EON-adjacent history, in a way similar to GoldenEye's and The World Is Not Enough's close associations with Ian Fleming history.

Unfortunately, those rich associations don't stop the title from sounding just a little average, redolent of Brosnan-era word mash-ups like Die Another Day and Tomorrow Never Dies. Personally, I think I preferred A Reason to Die, but we'll see how No Time to Die fits the story. And, of course, how it fits into the lyrics of a hopefully awesome song, which is the true test of Bond movie titles!

I'm surprised the title treatment didn't line up the O's in "No" and "to" to make a "007" (as seen on the Quantum of Solace and Casino Royale posters), but it does use a font that's been seen over the years (in a few variations) on many spy titles in film and print, including several James Bond editions.
Posted by Tanner at 3:18 PM 1 comment:

USA has released the first trailer for their upcoming Bourne TV spinoff, Treadstone.

Treadstone is the long in the works TV series derived from the Matt Damon Bourne films and based on the secret super assassin program originated in Robert Ludlum's novel The Bourne Identity (review here).

The project has been percolating in one form or another ever since 2010, when CSI creator Anthony Zuiker attempted a Treadstone show for CBS. But when Tony Gilroy came aboard to direct the theatrical spinoff The Bourne Legacy, he didn't want a competing version of the mythology on TV, and made it a condition of his directing that the nascent show be killed. The new incarnation comes from Heroes creator Tim Kring, who produces along with Captivate Entertainment's Ben Smith. Smith's fellow Keeper of the Ludlum flame at Captivate, Jeffrey Weiner, executive produces (as he does on the Bourne films) along with Ramin Bahrani, among others. Acclaimed Iranian-American helmer Bahrani directs the pilot. Bahrani has directed such indie features as 99 Homes and Chop Shop, the latter of which late film critic Roger Ebert famously anointed the sixth best film of the 2000s. More recently Bahrani directed HBO's Fahrenheit 451, with Michael B. Jordan and Sophie Boutella.

It's clear that Kring's Treadstone takes some liberties with the versions previously established in both the books and the films, making all of the programs' assets virtual amnesiacs, in that they have been brainwashed not to realize that they are sleeper agents until the moment they are awakened. While this does somewhat undermine Bourne's own special circumstances, it also feels like a clever way to really cash in on the brand and give audiences an experience similar to what they've seen in the movies.

In Robert Ludlum's The Bourne Identity (review here), Treadstone 71 was the shadowy intelligence group that David Webb worked for (based out of a New York brownstone), with whom he created and assumed his more famous identity as assassin Jason Bourne. Nebulous and illegal though it may have been, in the book Treadstone's motivations were basically heroic. The Treadstone of the movies, which creates super-assassins through brainwashing and later drugs, is a much more sinister organization. It was also, I believe, officially shut down by Brian Cox's character, Abbott, in The Bourne Supremacy, and then reconstituted as Outcome by Ed Norton's character in The Bourne Legacy (review here). It will be interesting to see if the TV series mentions Outcome at all, and how closely it sticks to the mythology established in the movies.

Treadstone is not only keeping alive on the small screen, but also in print. Earlier this year, the Ludlum estate has commissioned author Joshua Hood to pen the first book in a new Treadstone literary series, The Treadstone Resurrection, which will be in stores this fall—I assume about the same time the show premieres on USA.
Posted by Tanner at 3:51 AM No comments: