The rare 1966 Eurospy movie Kiss the Girls and Make Them Die (review here), starring Mannix's Mike Connors (along with Raf Vallone, Dorothy Provine and Terry-Thomas), will air tonight on the Sony-owned cable channel GetTV at 11:05pm Pacific. This isn't a channel I was familiar with, but you can find out if it's available in your area here. It seems to have pretty wide coverage. They've been showing a lot of relatively obscure Eurospy movies lately, including Assignment K and the wonderful Hammerhead (review here). (Both of those films have been airing a lot, so check your listings. Hammerhead, in fact, will screen immediately following Kiss the Girls and Make Them Die.) But both of those titles are available on DVD through Sony's MOD program. To date, Kiss the Girls and Make Them Die, frustratingly, is not. Since this is a Sony owned station, apparently programmed largely from the Sony library, I hope this means that the studio still owns the rights to this film... and more importantly that they might have plans to release it on MOD. It's a real classic, and I've often expressed surprise that it hasn't been made available by now. If you haven't seen it, be sure to set your DVR! And Bond fans may be particularly interested to see how much its plot foreshadows the movie Moonraker.

Another spy movie (also available on Sony MOD) that they've been playing a lot is Who Was that Lady (review here) with Dean Martin and Tony Curtis. Speaking of Matin, the Matt Helms also seem to be a fixture in the GetTV rotation.

Read my review of Kiss the Girls and Make Them Die here.

Thanks to Bob for the alert!
Posted by Tanner at 8:19 AM No comments:

The new season of Covert Affairs (the fifth) kicks off tomorrow night at 10pm on USA. Though it's had its ups and downs, Covert Affairs remains strong after so many years. It's followed the trajectory of most modern spy series that start off fairly serious. (I'm thinking of you, MI5!) After more grounded early seasons in which CIA agent Annie Walker (Piper Perabo) engaged in fairly realistic spying and didn't carry a gun, by last season she had transitioned into a full-on female James Bond, not only armed but deadly, and when last we saw her engaging in some Jack Bauer-style shenanigans in Shanghai. But the good news is Perabo and the series have handled that transition well, and while the overall tone has changed a bit (even the office politics, which remain my favorite part, have become soapier... though still not as soapy as 24), Covert Affairs is as much fun to watch as it ever was! I'm looking forward to seeing where the fifth season takes Annie. Covert Affairs: Season 4, meanwhile, is now available on DVD, with extras including deleted scenes, a gag reel, an action reel, and the prequel minisodes series Sights Unseen: Auggie Undercover.
Posted by Tanner at 10:32 AM 3 comments: 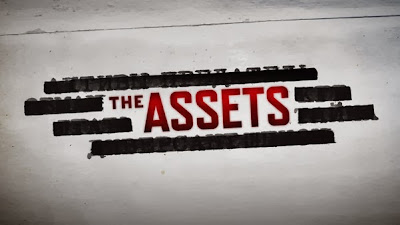 ABC tried to capitalize on the success of FX's 1980s-set Cold War spy hit The Americans with a period spy drama of their own last winter, the ambitious 8-part miniseries The Assets. Based on the book Circle of Treason, The Assets told the true story of the hunt for the most damaging Soviet mole in the CIA's history, Aldrich Ames. Unfortunately, none of the success of The Americans rubbed off on The Assets. With little or no advertising behind it, the miniseries netted the lowest ratings in the network's history, and got pulled after just two episodes. Which was a shame, because the viewers who did tune in found that after a rocky pilot, The Assets was becoming pretty compelling in its second episode. And those of us who liked it were left hanging as to how we might ever be able to see the remaining eight episodes. Now, six months later, with as little promotion as accompanied its inauspicious debut, ABC has quietly snuck The Assets back into its schedule. The third episode, "Trip to Vienna," aired Saturday night at 9. The fourth, "What's Done Is Done," is currently scheduled for next Saturday at the same time. Hopefully it won't be pulled from the summer schedule as well, and we'll get to see the whole series. And hopefully the network will put it On Demand as well, so that fans who missed the unpromoted return last night can still catch it. And while we're hoping all these hopes, I also still hope that a DVD set eventually materializes. For now, though, I'm just grateful that it's back on the air.
Posted by Tanner at 1:21 AM No comments:

El Rey Network has released a new, longer trailer for their upcoming spy series Matador, from writers Roberto Orci and Alex Kurtzman (Alias, Mission: Impossible III) and director Robert Rodriguez (Spy Kids, Machete Kills). I'm excited about this series, about a secret agent whose cover is an international soccer star, but I'm worried that the title may throw off potential audiences. After all, he's a spy and he's a soccer player, so a title pertaining to one of those two professions might make sense. One thing he isn't, as far as I can tell, is a matador. Seems confusing. Gabriel Luna, Nicky Whelan and Alfred Molina star. Matador debuts July 15 on El Rey.

Posted by Tanner at 6:30 PM No comments: