Director Christopher McQuarrie has Tweeted (via Dark Horizons) a candid shot of the latest iteration of the IMF team from the set of Mission: Impossible 5. Comprising a sort of all-star roster from the previous film entries, Jeremy Renner, Tom Cruise, Simon Pegg and Ving Rhames would be the 8x10s on Jim's desk if the movies ever did that classic TV "team selection" scene... and if the film series hadn't stupidly made Jim Phelps a traitor. (Come on, McQuarrie, please undo that misstep with a throwaway line about how the agent who assumed Phelps' name after his retirement turned out to be a real asshole or something... ideally delivered in a cameo from Martin Landau or Leonard Nimoy or Peter Lupus!) Notably absent is Mission: Impossible - Ghost Protocol's female lead, Paula Patton. I guess the film series is emulating the TV show's fourth season, when rather than replacing Barbara Bain with another female regular, the producers opted for a guest actress each week. But the important takeaway here is that in his first photo from the set, McQuarrie has chosen to focus on the team, and not on Cruise alone! While the first three movies were mostly solo Cruise vehicles, Brad Bird's Ghost Protocol made huge strides in steering the films back in the direction of the classic show—which was always team-oriented. I hope this is a sign that McQuarrie intends to continue along a similar course. His caption would seem to indicate so!

Posted by Tanner at 9:10 AM No comments: 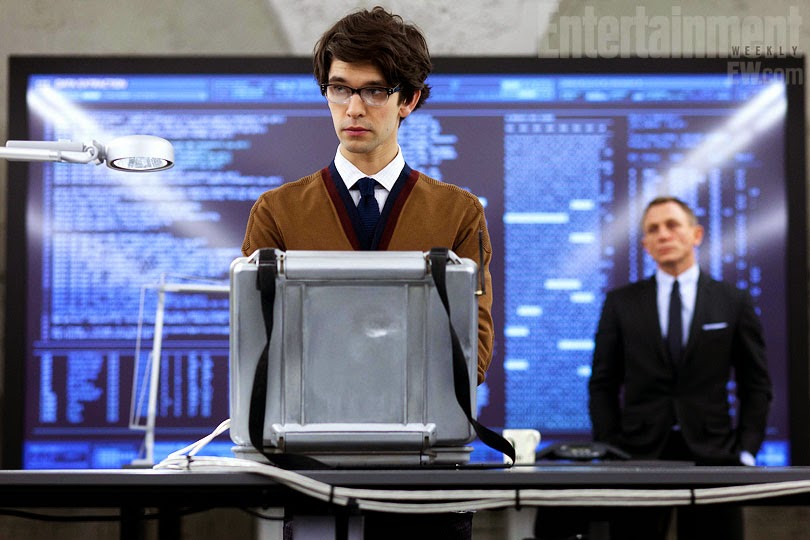 Last February we heard that BBC Two had commissioned a five episode spy series from Ian Fleming Steel Dagger winner Tom Rob Smith (Child 44) called London Spy. If it wasn't already among the most promising upcoming spy television, it certainly is now, because The Hollywood Reporter reports that Q himself, the great Ben Whishaw (Skyfall, The Hour), has signed on to star! Whishaw will play Danny, a "hedonistic romantic" drawn into the dangerous world of espionage when his new boyfriend, Alex, disappears. The drama starts filming next month, with further casting expected to be announced soon. Then, in December, Whishaw begins filming Bond 24.
Posted by Tanner at 9:20 AM No comments:

Surely "Live and Let Die" must be the most covered James Bond song ever? Guns'n'Roses probably did it most famously, but the Paul McCartney and Wings tune (probably my own favorite Bond song) has also been covered over the years by Chrissie Hynde, Ginger Spice and Duffy to name just a few. For me, however, the version to beat remains this crazy cover by Brazilian Band Pato Fu performed on children's instruments. This fall, Billy Joel will throw his hat into the ring in a high-profile way when he covers the song (along with "Maybe I'm Amazed") on the forthcoming all-star Paul McCartney tribute album The Art of McCartney. Other artists in the line-up include Hynde (performing "Let It Be"), Bob Dylan (performing "Things We Said Today"), Willie Nelson (performing "Yesterday"), Jeff Lynne, Brian Wilson, Roger Daltrey and Yusuf (aka Cat Stevens). No more Bond songs though, obviously. Still, it sounds like a pretty cool album!

Read more about the sometimes surprising connections between The Beatles and James Bond over the years in my post "The Beatles vs. James Bond (or Blond)."
Posted by Tanner at 2:14 AM No comments:

Tradecraft: Matt Damon to Reprise His Bourne Identity After All?

Matt Damon has long maintained that he would only return to the role of Jason Boune if Paul Greengrass returned to direct. And Greengrass has been saying for just as long that he would never return to direct, a self-sustaining loop which seemed to preclude ever seeing another Bourne movie starring Damon. Eventually even Universal gave up on hoping to extend their blockbuster spy franchise with its original star, and hired Jeremy Renner to star in a weird placeholder spin-off movie, The Bourne Legacy, directed by series scribe Tony Gilroy. Since Gilroy and Greengrass had famously fallen out during production on The Bourne Ultimatum, and Damon sided with Greengrass, Gilroy's increased involvement in the spin-off seemed to dash further any hopes of a Damon return. Even so, however, The Bourne Legacy was carefully scripted so as not to alter Bourne's universe in any way. That decision effectively neutered the spin-off, but left the door wide open for a Damon return, however unlikely that seemed. Spy fans, of course, learned three decades ago to never say never, and now it looks like just such a return is finally in the cards!

Deadline's Mike Fleming broke the story earlier today that the studio "has begun making deals with Matt Damon and director Paul Greengrass to reunite" for another Bourne movie! While this is hugely exciting news, it's important to note that no one at Universal nor reps for either key player has yet gone on the record. Still, Fleming seems confident that a deal is underway. And a little later, The Hollywood Reporter's Borys Kit corroborated Fleming's story with his own sources. And Kit brought another piece of the puzzle to the table; he reports that Greengrass will not only direct, but also script the next Bourne movie. While he hasn't had a writing credit on either of his previous Bourne films (The Bourne Supremacy and The Bourne Ultimatum), the director is no stranger to writing or to the spy genre. As a journalist back in the Eighties, he co-wrote one of the most notorious espionage tell-alls of all time, Peter Wright's Spy Catcher. And as a screenwriter he penned the critically acclaimed 9/11 drama United 93, the equally acclaimed Irish Troubles picture Bloody Sunday, and numerous TV projects. Now he'll take a crack at a story conundrum he once said was insurmountable: where do you take the Jason Bourne character now that he's regained his memory? I have a tip for Greengrass on that one. Do what Gilroy annoyingly (and loudly) refused to do, and return to Robert Ludlum's novels. There are several movies' worth of great plots in those books that remain untapped by Hollywood. (The first film really only used the book's premise and opening, while the second two were basically adaptations in name only.) Sure, the previous films have changed a lot of stuff from the books, and killed off a couple of crucial characters, but they haven't done anything that Greengrass couldn't work around. I'd also love to see Damon's Bourne in the Hong Kong and Macau locations of Ludlum's second novel, since we've really only seen him in action in Europe so far. (And briefly in New York, India and North Africa.)

So where do these latest developments leave Renner's Aaron Cross character from The Bourne Legacy? Only months ago it was announced that Fast and Furious director Justin Lin would be helming a second Cross "Bourne" movie. (And I'm still quite keen to see him do it; I think his action sensibility is just what's needed to course correct from the first spin-offs missteps.) Andrew Baldwin was slated to script. But now Lin is attached to direct the second season of True Detective for HBO, and Fleming reports that Universal is eager to slot the Damon/Greengrass reunion about the "real" Jason Bourne in the July 16, 2016 berth previously allotted for Aaron Cross. That doesn't mean, however, that the studio is giving up on Renner's character. Rather, reports Fleming, "Universal intends to continue that series and to broaden its franchise base" along the lines of the interconnected franchises in the Marvel Cinematic Universe. That's a smart move, in my opinion, and a win/win scenario for spy fans. One that means we may well continue to see new movies set in the Bourne Universe, focusing on different agents, for a long time to come. Who knows? Maybe one day we'll even see Gilroy's dream of having the two spies cross paths come true. But, given these new developments and old rivalries, probably not with Gilroy himself involved. Personally, I welcome the return of Matt Damon as Jason Bourne. It's true that The Bourne Ultimatum was a satisfying send-off for the character, but Greengrass and Damon managed to top it in terms of tour de force action setpieces with their very next collaboration, Green Zone. So I enthusiastically look forward to seeing whatever they come up with next for Bourne.
Posted by Tanner at 4:17 AM No comments: