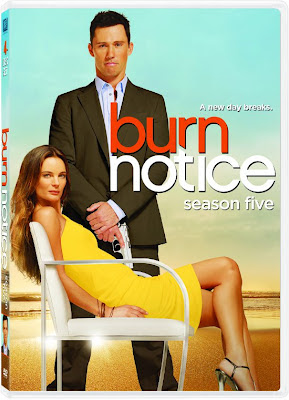 Fox Home Entertainment announced last week that Burn Notice: Season Five will be out on DVD on June 5. The fifth season of USA's flagship spy series was certainly an interesting one. The creators finally shook up the formula, which had honestly become a little stagnant, by having Jeffrey Donovan's formerly burnt spy Michael Westen finally rejoin the CIA... at least as a consultant. This new role opens up the scope of Michael's missions, and finds him on assignment overseas as an actual spy rather than just helping people in need in Miami. He also strikes up a somewhat uneasy partnership with his Agency handler, Agent Dani Pearce (Lauren Stamile), and finally comes face to face with the shadowy nemesis who burned him all those years ago. Overall, I thought it made for a marked improvement over the previous season for a show that's never less than thoroughly entertaining to begin with.

If a solid season alone weren't enough reason to buy this release, Fox has packed it with lots of exclusive bonus content including an extended episode, deleted scenes, a gag reel and a featurette on the memorable villains of Burn Notice featuring "unique insights from the actors who play them along with a snarky rebuttal on their deeds from [Sam Axe actor] Bruce Campbell!" As fans know already, Campbell long ago staked out his place as one of the most entertaining contributors to DVD features in the business, so any bonus content with his involvement is guaranteed to be worth a watch.

Retail is $49.98, but that price will no doubt drop on Amazon as we near the release date.