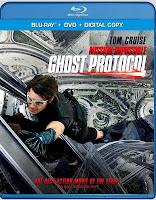 When Brad Bird's Mission: Impossible - Ghost Protocol was announced for an April DVD and Blu-ray release, Paramount didn't specifically address the question of the film's aspect ratio. Would it shift from 2.35:1 widescreen to 1.44:1 "fullscreen" (approximately) for the action sequences that were shot using IMAX cameras and expanded in IMAX theaters to fill the entire, square-shaped image space from top to bottom? Some other Blu-rays of films that were partially shot in IMAX have done this, like Christopher Nolan's The Dark Knight. Well, The Digital Bits has learned the disappointing answer: the Ghost Protocol Blu-ray and DVD will not change aspect ratios for the IMAX sequences (like the spectacular Burj Khalifa scene). On the plus side, that means that the entire film will play smoothly on your widescreen TVs with no potentially noticable or awkward black bars on the side of the frame ("windowboxing"). On the considerable minus side, it means that what we're getting is essentially a cropped image (akin to the dreaded "pan and scan" of old), losing out on picture detail that the director intended to be seen on the top and bottom of the frame. Of course, since the film didn't play exclusively on IMAX screens, Bird framed the sequences so that they would also work fine with that part of the picture cropped in regular theaters and on your TV. But I thought that the shift made the scenes in question even more spectacular, and personally I would have at least liked the option of buying the Blu-ray with multiple aspect ratios. Oh well.
Posted by Tanner at 6:33 PM

Is there a place that has a list of Blurays that do utilize rotating aspects ratios?