Once again, I'm behind here, with another massive catch-up round-up. There have been a lot of spy DVDs released in the past few weeks, all of them good stuff. As always, if you're inclined to buy any of them, you can support the Double O Section by doing so from the provided Amazon links! 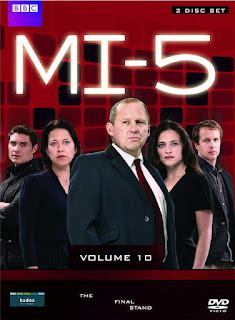 Now American fans get to see what British fans saw on TV last fall: the final season of the BBC's long-running spy drama MI-5 (known as Spooks over there). Unlike the last few seasons, MI-5: Volume 10 actually has a few special features (albethey disposable and spoiler-filled ones) including "Top Ten MI-5 Moments" (as chosen by the cast and crew) and "Harry’s Game," devoted to MI-5’s most constant character [Harry Pearce, played by Peter Firth]." I'm looking forward to seeing how ten seasons' worth of twists and turns pays off in what I hope turns out to be a satisfying finale! Retail is $29.98 for the 2-disc set, containing all 6 episodes. 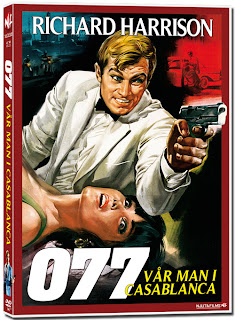 Finally, we gat the long-awaited third film in the "Bob Fleming, Agent 077" series of Eurospy movies on DVD! Following Secret Agent Fireball (starring Richard Harrison) and the unforgettable Fury in Marrakesh (a prequel in which Stephen Forsyth took over the lead role), which both came out on PAL discs from the Swedish company Fin de Siecle Media, the middle film in the series, Killers Are Challenged (aka 077 Bob Fleming - Man in Casablanca) is now available as an All Region PAL title from another Swedish label, Njuta Films. Killers Are Challenged (1966) was directed by prolific Italian filmmaker Antonio Margheriti (often credited as Anthony Dawson), whose only other Eurospy movie was the thoroughly entertaining Lightning Bolt, starring Anthony Eisley. (Unless you count the giallo Naked You Die which has a few vague spy elements and even a cameo from "James Bond.") Personally, I really enjoy Lightning Bolt, but the infallible Eurospy Guide rates Killers as a better film, so I'm quite eager to see it! Susy Anderson, the beautiful Sdenka from Mario Bava's Black Sabbath (in her only spy role) and the delectable Wandisa Guida (from Lightning Bolt) co-star. No Eurospy movie ever relied too heavily on a plot, but for those who care about such things, here's the official description: "Three scientists discover an alternative energy to oil. Two of them die under mysterious circumstances, while the third - Coleman - is protected by CIA agents in Geneva. Special Agent Bob Fleming is instructed to go to Casablanca with the researcher's identity in order to investigate the mysterious deaths. He convinces Coleman's wife to work - with the rest of the women around him trying to kill him." You won't find this one on Amazon, but the import DVD, which does feature an English audio option, is available from Diabolik DVD for $21.99. 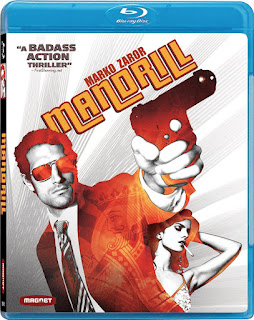 In the vein of the Jean Dujardin OSS 117 films and Black Dynamite, the Chilean action thriller Mandrill is a modern film conceived to look like it was made in another era. Only while those are parodies, this one is played relatively straight. The setting is South American, but the flavor is pure Eurospy. I've wanted to see this ever since I first heard about it when it played the festival circuit a few years ago, and I'm very excited that now I can, thanks to Magnet Releasing, who have released Mandrill on DVD and Blu-ray with English subtitles. (I think there's also a dubbed option, which might actually be appropriate for this sort of film.) Special features include the trailer, "Behind the Scenes of Mandrill" and "Anatomy of a Fight Scene." Retail is $26.98 for the DVD and $29.98 for the Blu-ray, but both, of course, are considerably cheaper on Amazon. 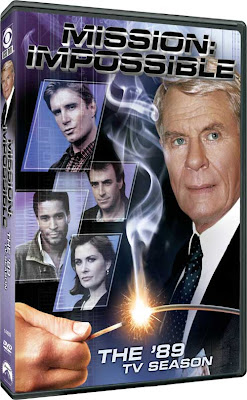 Presumably originally intended to coincide with the DVD release of the latest Tom Cruise blockbuster before it ended up being a big hit and lasting in cinemas for longer than likely expected, the second season of the 1988-90 revival series of Mission: Impossible instead hit DVD a few weeks ago, beating its theatrical cousin by a month. And what a joyous occasion it is for fans of classic spy television: we now have the final season of Mission: Impossible TV episodes containing the final appearances of Peter Graves as the one and only, real Jim Phelps. It's hard to believe that the first theatrical Mission (in which Jon Voight played a very different character named Phelps) came just five years after this DVD set leaves off. The two incarnations of the brand seem worlds apart. This 4-disc set (containing all 16 episodes of the revival's second season) represents my own preference. These episodes aren't as good as the Sixties and Seventies ones, but they're still highly enjoyable and, for me, more fun than the movies. Speaking of that original series, one of its stars, Greg Morris, returns to the revival once more reprising his role as Barney Collier in the two-part season premiere, "The Golden Serpent." (Those episodes, which were bundled as a film in Europe, are directed by old ITC hand Don Chaffey, who helmed his share of spy fare like The Prisoner, The Avengers, The Baron and more back in the Sixties.) Morris' son, Phil, is a regular on the revival, playing Barney's son Grant. The other regulars this season are Tony Hamilton, Jane Badler and Thaao Penghlis. Happily, for the first time ever on any Mission: Impossible DVD set from CBS/Paramount, there are even some bonus features! Not many, granted, but some. We get four episodic promos (including the trailer for the feature version of "The Golden Serpent") and the priceless "Holiday Promo," which features Peter Graves and the rest of the cast in snug winter sweaters in front of a Christmas tree wishing audiences season's greetings! It may not be that 1997 Diagnosis Murder episode "Discards" (which guest starred Phil Morris and Barbara Bain, reprising her Cinnamon Carter role from Mission's earliest seasons), which I would have loved to see included, but it's pure gold for Graves fans and likely the source of a screengrab that will feature on my Christmas post next winter! Retail on Mission: Impossible: The '89 TV Season is $39.98, but Amazon's got it way cheaper: just $25.49 right now. Complete your collection today!

You can also order Mission: Impossible: The '88 and '89 TV Seasons, which bundles the entire revival series together for just $69.98 (or less on Amazon). 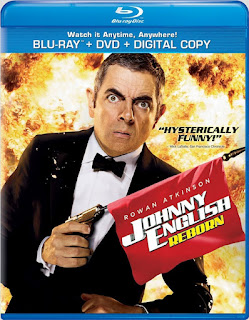 Johnny English Reborn, the unexpected eight-years-after-the-fact follow-up to the 2003 Rowan Atkinson spy spoof Johnny English, made a mint overseas but failed to have much impact in America. Hopefully more U.S. viewers will discover it on DVD and Blu-ray DVD Combo, courtesy of Universal Studios Home Entertainment, because it's a very funny spy send-up. In the pantheon of spy spoofs, it's not as good as the Jean Dujardin OSS 117 movies, but it's way, way better than any of the Austin Powers sequels. If you liked the original Johnny English (which is making its North American Blu-ray debut to coincide with this release), you'll like this one too. I laughed pretty much all the way through it. The DVD release includes a commentary track with director Oliver Parker and writer Hamish McColl, deleted and extended scenes with director intros, a gag reel, and a featurette on "The Wheelchair Chase." The Blu-ray/DVD combo has all that plus four more featurettes ("The English Files: The Making of Johnny English Reborn," "Working With Rowan," "Gadgets" and "English in Hong Kong"). So that's the one to get. Retail is $29.98 for the DVD and $34.98 for the BD/DVD Combo, but of course both are significantly cheaper on Amazon.
Posted by Tanner at 7:02 PM

Really happy to see that the original Mission Impossible has been released.

According to this list of DVD releases by date Poirot Series 3 was also released in March.

It looks like Killers are Challenged is already sold out from Diabolik DVD. Do you know of other places that might sell this? I'm not finding anything from my searches online..

I was surprised to see 077: Our Man In Casablanca/Killers are Challenged for rental at my local DVD place here in Stockholm the other day - but I see it has a Swedish distributor so that makes sense. I rented it, because I'm fascinated by the whole idea of the Eurospy phenomenon and have several scores from these films, but apart from catching the occasional OSS117 on late-night TV years ago and watching a few Youtube clips I've never seen one.

I also rented The Adjustment Bureau, which I watched just before 077 - that might not have been the best idea, because it really highlighted how low-budget and simplistic the 60s film was. The illustration of Harrison in the poster used on the cover is so different from what he actually looks like in the film that I didn't recognize him, and on his first appearance I thought he was a villainous henchman! I'd forgotten these guys were beefcake material, and hadn't expected him to have that big a build. The dubbing was less bothersome than I initially thought it would be, though the overly loud sound effects of punching and so on did make me smile. There are some nice touches in the film, such as Fleming - or just 'that agent' as he's mostly referred to - getting lost in an odd hidden garden, rather a good chase early on through what looks like a zoo overlooking Casablanca, although no animals are seen, and a quasi-Cockney former Scotland Yard man as a taxi driver ally. Casablanca itself comes alive, and even the scenes with grey Geneva are evocative.

I also thought Susy Andersen was beautiful, and looked much more modern and fresh than everyone else in the film. Some of the other women suffered a little from looking rather like each other, and rather hard, too - there's certainly an exploitative nature to the film, and I was saddened at Googling Mitsouko and discovering she committed suicide. Despite some interesting moments, though, the film is terribly hokey, and Harrison has no real charisma. Probably becaue I watched Matt Damon the night before, his face reminded me of Damon's a little. But Damon plays the essentially characterless and bland Jason Bourne with a thousand times more energy, charm, intelligence and wit than is visible here, and I don't think that can entirely be down to budget and script. It made me appreciate anew just how good Connery was as Bond, because he's got scenes not a million miles from some in this film but he transforms them with his presence. But it was interesting to watch nevertheless, perhaps simply because it made me think about the genre in a slightly different way.