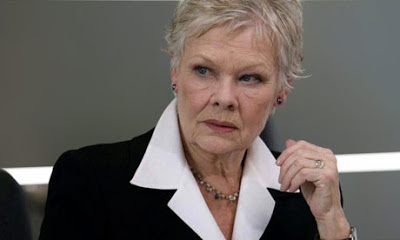 This is interesting! When the Bond movies introduced a new female M in 1995's GoldenEye, played by Judi Dench, the literary 007 rights holders (then Glidrose Productions) decided that it was time for a female M in the books as well. Author Raymond Benson named this character Barbara Mawdsley, but the books have always held a separate life than the movies. (None of the continuation novels to date has been turned into a film.) The female M of the films was never named. Even when Pierce Brosnan left the role, Dench remained as M in the franchise reboot Casino Royale (2006), opposite Daniel Craig. There's one scene in that film where Bond almost speaks her name (hinting that it begins with an M), but she cuts him off snapping, "Utter one more syllable and I'll have you killed." Even in Skyfall (2012), which focuses more on Dench's M than any other movie, her name is never spoken aloud. But, apparently, it is revealed... if you have sharp little eyes. ComingSoon (via CommanderBond) recently had the opportunity to examine up close some props from that film, and discovered that one prop displayed prominently on screen lists M's real name. MAJOR SKYFALL SPOILERS FOLLOW: The inscription on the box containing the porcelain bulldog bequeathed by M to 007 (itself a sly nod to Tinker Tailor Soldier Spy) reads, "Olivia Mansfield bequeaths James Bond." So that answers that, then! Fascinating.
Posted by Tanner at 12:45 AM

I have to say that Olivia Mansfield sounds much better (and seems more suitable) than Barbara Mawdsley.

The name Barbara Mawdsley was also in the Goldeneye script, while the name Olivia Mansfield wasn't in the Skyfall script.

Barbara Mawdsley was in the GoldenEye script? That's interesting.

Wow, I had no idea of that either. I always thought Benson came up with the name. Do you know whose draft, Dave? Damn, all my Bond scripts are in storage!

Anonymous said...
This comment has been removed by the author.
7:23 AM

I don't know which draft, no. I know it was originally Martin Campbell's idea to make her a woman, so it doesn't seem to be a direct influence of Stella Rimington being made Chief at MI5, as is widely believed.

On the other hand, Barbara seems a much more suitable name for a British woman of Judi Dench's age. Olivia just sounds rather too *modern*.

Tell that to Olivia De Havilland!

Or Olivia Newton-John, who is (surprisingly) pretty close to Dench's generation. (And was born in the UK, not Australia.) Or Olivia Hussey. (For some reason she's always the first Olivia I think of when I hear the name which, I'll admit, is kind of weird.)

Are we really going to pull out every Olivia older than 50 we can find? ;) Obviously I'm talking about frequency and popularity of names according to the period, not whether they even existed...!