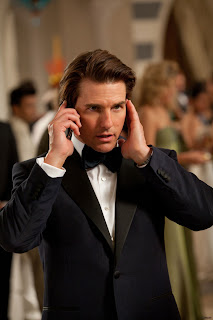 Deadline reports that Tom Cruise has officially signed on for Mission: Impossible 5—or whatever they end up calling it. That's certainly not a surprising development (especially considering that the last entry, Mission: Impossible - Ghost Protocol, set franchise records by grossing almost $700 million worldwide, and garnered some of the series' best reviews), but it does make things official. We already knew that Paramount was keen to do another one, and last we heard frequent Cruise collaborator Christopher McQuarrie (who wrote and directed the Cruise vehicle Jack Reacher) was the top choice to direct. But there's been no official announcement confirming McQuarrie's involvement, and indeed another story in today's trades calls it into question. According to The Hollywood Reporter, McQuarrie has just signed on to take on another iconic Sixties spy title—Warner Bros.' previously announced Ice Station Zebra remake. (The busy writer/director has also long been linked to a third spy project, Paramount's Tom Clancy reboot focusing on the black ops specialist John Clark.) Last we'd heard about that project (which was over a year ago), David Gordon Green (Pineapple Express) was writing with an eye to direct, but things must have changed because the trade reports that McQuarrie will now handle both those duties. The original Ice Station Zebra, based on the Alistair MacLean novel, marked a rare starring role in a feature film of that era for consummate Sixties TV secret agent Patrick McGoohan (alongside Jim Brown, Ernest Borgnine and Rock Hudson). Its plot was heavily steeped in the Cold War, and today's trade story makes no mention of whether this new version will retain the period setting or update it, but I would guess the latter. The trade does speculate, however, that "the deal may impact the development of Paramount's Mission: Impossible 5, which McQuarrie is rumored to be the favorite to direct. Cruise is back to star in the action tentpole but there is no clear timetable for either movie project." Well, whoever ends up helming the next Mission: Impossible movie, my primary hope remains that he or she maintains the bright palette and clearly-filmed action sequences Brad Bird brought to the franchise in Ghost Protocol (far and away my favorite of the film series)... and most of all that they continue the closer connection to the TV show established in that installment! (Including the emphasis being on a team rather than an individual agent.) Today's story makes no mention of whether any of Cruise's Ghost Protocol costars were on board, but I really hope to see them all come back.

Meanwhile, as we heard last week, Cruise also remains attached to another movie based on a classic Sixties spy TV show, Warner Bros.' The Man From U.N.C.L.E. But there's still been no official announcement confirming his involvement in that one.
Posted by Tanner at 2:24 AM

Oh, for *****sake! Is he gonna be the next Bond, too? 'Cos I'll wash down some-...never mind.
He seems to have picked up a habit of starring in EVERYTHING from his ex-wife.
A remake of "Ice Station Zebra" sounds great, though. I better read the book. Although, Hollywood being so fickle and paranoid, this could mean that a movie of Matthew Reilly's "Ice Station" has just gotten further away. 'Cos too many executives can't get past the similarity of the titles.

That's the caption for the picture up above.

It would make more sense if Hammer was cast as Solo. He has the mid-atlantic polish that Robert Vaughn had. Plus he's younger. The better to be if this takes off into franchise territory. As for Kuryakin, I'm sure any up and coming blond and European actor can fill the bill.