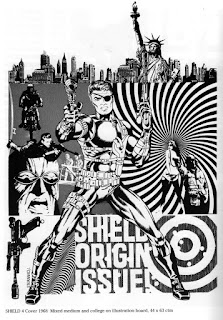 I was hoping that we'd see some reissues of classic Nick Fury and S.H.I.E.L.D. comics to tie in with the debut this fall of Joss Whedon's new Marvel/ABC TV series Agents of S.H.I.E.L.D.... and it looks like we will! While there's still no sign of an Essential Nick Fury volume (something I would love to see, ideally compiling his guest appearances in other books as well as his own issues), the very best S.H.I.E.L.D. comics ever—those by acclaimed artist (and often writer as well) Jim Steranko—will be collected for the first time in a single volume. S.H.I.E.L.D. by Jim Steranko: The Complete Collection, a mammoth, 352-page trade paperback, will hit shelves on September 24, just in time to coincide with the TV show. While all of Steranko's Nick Fury material has been reprinted before, this new all-in-one edition will serve as a handy opportunity to have it in one spot, and make for the perfect introduction to Nick Fury and his secret spy network for new readers. Essentially, it will supersede the out-of-print collections Nick Fury, Agent of S.H.I.E.L.D. and Nick Fury: Who Is Scorpio? I hope all sorts of new readers discover Steranko's groundbreaking, psychedelic pop spy art because they watch the TV show and then buy this book. I also hope that the show takes some inspiration from these classic Sixties comics.

Retail for the hefty tome is $34.99, but Amazon has it available for pre-order at a significant discount. A few weeks later, Marvel will also release a new trade paperback collection of the 1980s miniseries Nick Fury vs. S.H.I.E.L.D., most recently available only in hardcover. The new, 304-page paperback edition will retail for $29.99, but it's also discounted on Amazon. S.H.I.E.L.D. completists will still want to own the three hardcover volumes of Marvel Masterworks: Nick Fury, Agent of S.H.I.E.L.D. They're pricey, but between them they reprint every single issue of Fury's appearances in Strange Tales and his own 1960s series (not just the Steranko material; Frank Springer contributed some fantastic artwork to Nick Fury as well, and rarely gets enough credit for it because he worked in Steranko's shadow), as well as copious bonus content like Fury appearances from Fantastic 4 and The Avengers, and his 1976 issue of Marvel Spotlight drawn by Howard Chaykin.

To learn more about Marvel's spy agency and its top agent, read my extensive S.H.I.E.L.D. primer here.
Posted by Tanner at 11:58 PM