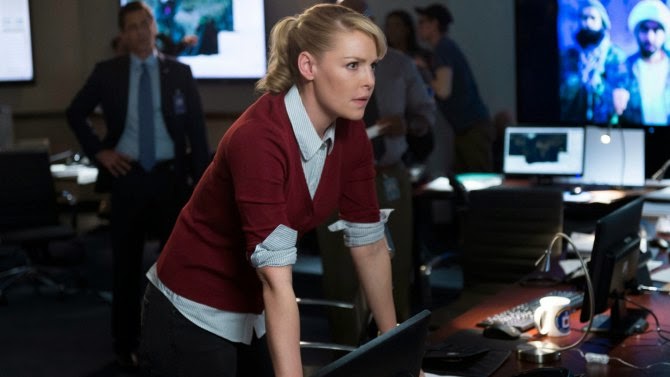 With network upfronts coming next week, a number of pilot pickups are already being announced. This season saw more spy pilots in contention for series orders than I can ever remember, so it will be interesting to see how many actually make it to the air. NBC is the first out of the gate with spy orders, and amazingly they've picked up both of their spy pilots, plus an international conspiracy thriller that sounds sure to include an espionage angle. Deadline reports that NBC has picked up State of Affairs, starring Katherine Heigl and Alfre Woodard, and Allegiance (formerly known as Coercion), starring Hope Davis and Gavin Stenhouse.

In State of Affairs, Heigl plays CIA analyst Charleston "Charlie" Tucker whose duties include briefing the President (Woodard) daily on developing crises around the world. Charlie also has a personal relationship with the President, having once been engaged to her son before he died in a terrorist attack. According to the trade, "Charlie survived that attack and now is determined to bring the perpetrators to justice."

Allegiance was developed by Bourne series veteran George Nolfi, who wrote and directed the pilot based on the Israeli format The Gordin Cell. No doubt its series order has something to do with the success of The Americans on FX, because like that show Allegiance focuses on a Russian sleeper cell operating in the United States. But while the cable show is a Cold War period piece, Allegiance is very much contemporary. Stenhouse plays Alex O'Connor, a young, idealistic CIA analyst on the Russia desk, who learns that his affluent parents, Mark (Scott Cohen) and Katya (Hope Davis), are really deep cover Russian sleeper agents freshly reactivated with the goal of turning him as well. NBC previously explored a series based on The Gordin Cell last season, when Peter Berg developed it as M.I.C.E. That version didn't go anywhere.

Additionally, the network has also greenlit the international conspiracy thriller Odyssey, starring Anna Friel and Peter Facinelli. Odyssey follows multiple storylines around the globe all building to one massive industrial military complex conspiracy involving a multinational corporation secretly funding Al Qaeda terrorists. Although the main characters are a soldier, a lawyer and a hacker, a series with that premise seems bound to eventually dip into the Intelligence alphabet as well.
Posted by Tanner at 2:12 AM

With The Blacklist renewed very early this year, that makes four spy shows... I think two of those get renewed for 2015-16.

Heigl's one could go badly pear-shaped. Her last leading film role, One for the Money failed to make back its budget and she got a Razzie nomination.

Not to mention her spy movie, Killers, which was pretty awful. I have high hopes for this one though. I like that it's got a slightly different approach to a CIA show than we usually see... though I'm a little worried about her personal connections hinted at here, which might make it more generic.