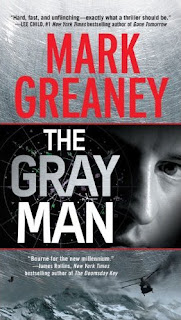 Captain America: The Winter Soldier is one of the best big budget spy movies in years, and its sibling directors, Joe and Anthony Russo, are looking to stay in that genre. Variety reports that the duo are attached to write and direct an adaptation of Mark Greaney's 2009 novel The Gray Man for Sony and producers Joe Roth and Palak Patel. My initial reaction is that they're better than this material. The Gray Man is one of the worst spy novels I've ever read. Then again, it's not the premise that's faulty; it's Greaney's execution. The Russos are just the guys to take the barest shred of that premise (a former CIA operative turned private assassin races across Europe to evade all the world's intelligence services and save the kidnapped family of his handler) and retrofit it into a far better film. It's a little alarming, however, that Joe Russo told the trade, “we found the material to be very compelling and ultra realistic.” Perhaps the series gets better, but one trait not found in the first novel of the four book series is ultra-realism. The book's climax beggars all belief as the hero catches more bullets than Butch and Sundance combined and still proceeds to single-handedly take on an army. That's the sort of thing I hope the Russos end up improving upon.

Roth told Variety, "We think this could be the next Bourne Identity movie series," which, of course, is exactly what he, and readers, and now viewers, are meant to think. The novel is a shameless retread of Robert Ludlum's bestselling tour de force. Hopefully the producers will continue to follow the Bourne movie template, and stray as far from the literary source material as the Matt Damon movies did.

Sony aren't the first studio to see Bourne-like potential in Greaney's series. Way back in 2010, New Regency had the rights and hired Adam Cozad (Jack Ryan: Shadow Recruit) to script. In January 2011 James Gray became attached to direct, and later that year Brad Pitt flirted with starring. That incarnation, evidently, fell apart. Which is too bad, because I really would like to see Brad Pitt topline a potential spy franchise.

It's unclear where The Gray Man will fit into the Russos' schedule, as they're slated to direct Captain America 3, which is set to open on May 5, 2016. Before that, however, their next espionage assignment will be helming the second and third episodes of Marvel's upcoming period spy series Agent Carter on ABC.
Posted by Tanner at 7:41 AM

Matthew, I have not yet seen Guardians, so Captain America is still my favorite 'summer movie'. I agree with you on 'The Gray Man'. That it is justa terrible book. Can the main character kill five villains, then ten, then twenty, till the end?

On another note, I really enjoyed 'A Most Wanted Man'. On the web, look for an article LeCarre wrote on Hoffman.

Wow- That book must suck if your description is correct.

"he catches more bullets that Butch and Sundance and keeps going?" How many times did he get shot in this book? (answer. . . once, in the leg)

And he single-handedly takes on an army? How many people did he kill on his own in the last act of the book (answer. . . 4. then he passed out from blood loss)

It's fine if you don't like a book, but making stuff up to bolster your opinion is poor form. Makes me wonder about your other reviews.

I'll stand by my comment, in that the body count continued to grow as the novel progressed to the point of losing all believability. I understand the author wrote several novels with the character. I've only read the first book.