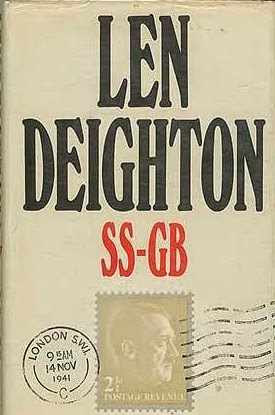 Variety reports that James Bond screenwriters Neal Purvis and Robert Wade (Skyfall, Casino Royale, The World Is Not Enough) have signed on to write a 5-episode miniseries for BBC One based on Ipcress File author Len Deighton's novel SS-GB. As much as I love Deighton, I have to confess I've never read that one because his alternate history novels never interested me as much as his Cold War spy thrillers. So I'll rely on the trade's plot summary. "It is set in an imaginary Britain controlled by the Nazis, if Germany had occupied the country. It centers on a police detective caught between the Nazis and the British resistance." But the alternate history setting doesn't mean that it's not a spy story! Speaking to The Guardian, Purvis and Wade called SS-GB "a brilliant tale of espionage that dares to think the unthinkable." I'll certainly have to read the book before this miniseries airs in 2015! I can't help but be a tad disappointed that this isn't news on the new television adaptation of Deighton's masterful Bernard Samson cycle that was first reported on last year, but on which there have been no updates ever since, but I guess I should just be glad that any Deighton is coming to television. And this sounds like fertile ground for a series, for sure! Besides their contributions to the last five Bond movies, Purvis and Wade's other genre credits include Johhny English and The Italian Job remake (on which they ended up uncredited).
Posted by Tanner at 5:56 PM

I'm a huge Deighton fan but I haven't read SS-GB either. I guess I should make the effort and do so.

It is great to see the film interest in the various Le Carre and Deighton projects.

I read it a good few years back and found it very good.

Glad to hear that, Silent Hunter. I completely agree, Bob! It's great to see any and all Deighton and le Carre film and TV projects! We'll both be adding SS-GB to our reading piles I guess, Dfordoom.