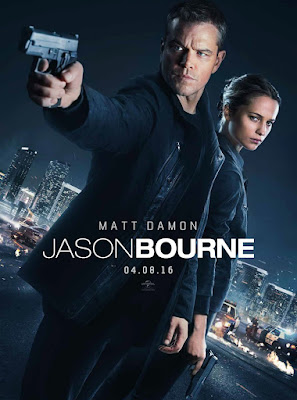 Universal has released a new international poster for Jason Bourne, Matt Damon's eagerly anticipated return to the titular Robert Ludlum character. Frankly, it's a pretty boring poster, if you ask me. (Especially compared with the simple, but exciting, teaser.) It looks like someone Photoshopped Damon's head onto a Taken poster... or lazily rehashed the worst James Bond campaign, from Die Another Day. That said, the movie itself (which also heralds the return to the franchise of director Paul Greengrass) looks characteristically fantastic! And it's nice to see Oscar winner Alicia Vikander getting a more prominent spot in the film's advertising than she did for her last spy movie, The Man From U.N.C.L.E. Jason Bourne opens July 29 in the United States.
Posted by Tanner at 9:15 PM

Boring is right. DVD bargain bins are littered with this crap- "photo-cropped" actors depicted getting their mean on by aiming bad-ass weapons. Is this an upcoming blockbuster movie or direct-to-video fodder? Hard to tell these days? That wind turbine sound we hear is coming from Saul Bass'grave.

Suitable since Damon announced that he believes guns should be banned in the US but he's okay with making guns cool and macho in his films and posters.

I also see Damon is back to selling Jason Bourne by trashing James Bond, calling the character "misogynistic." Thank God Damon's Bourne was only a stone-cold killer suffering from amnesia.