The Coldest City Warms Up to Atomic Blonde, and Charlize Keeps Spying 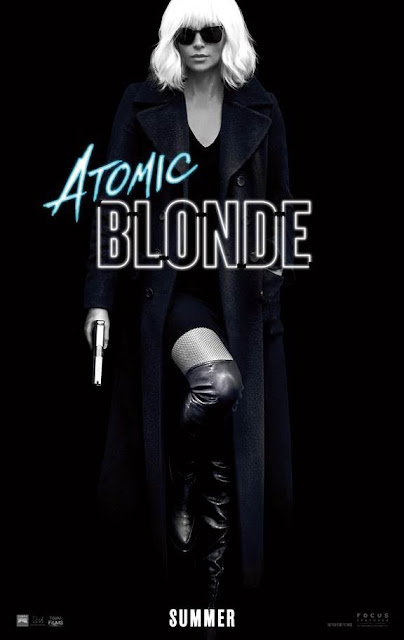 The bad news is that, according to Deadline, Focus Features has changed the title of their Cold War Berlin comic book adaptation The Coldest City to Atomic Blonde. They had one of the coolest spy titles ever, and now they've got a Roller Derby competitor. (Nothing against Derby Dolls; they just aren't the same as spies.) They had a brand, and now they have a handicap. The good news, though, is that the movie looks awesome enough to overcome a title like that! (Perhaps it's just so damn cool that the studio thought it was only fair to handicap it?) Adding ammo to my suspicion of the movie's actual awesomeness and the studio's confidence in their product is the news that they will debut it at the hip South by Southwest film festival four and a half months before its July 28 opening, allowing plenty of time to build positive buzz. (And in another sign of confidence, they had previously moved up that opening from August to July, at the height of summer.)

Atomic Blonde is based on the Oni Press graphic novel The Coldest City, by Antony Johnston (Alex Rider, Queen & Country) and Sam Hart. While the moody, black and white comic (to which Johnston recently published a prequel, The Coldest Winter) played up the chilly, brooding Cold War paranoia of 1989 Berlin, it's clear from the (thankfully very cool) poster that the movie adaptation (penned by Kurt Jonstad and directed by David Leitch, half of the duo behind the ultra-stylish actionfest John Wick and the man tapped to direct Deadpool 2) instead plays up the neon MTV aspects of that decade. So perhaps it will be a little more Deutschland 83 than The Americans as 1980s-set spy entertainment goes. I think it's safe to say that we can expect a bit more action from the film, penned by Kurt Jonstad (Act of Valor), than the comic, which was more concerned with the treacherous internecine bureaucracy of Cold War espionage. Reigning action queen Charlize Theron (Mad Max: Fury Road) stars as MI6 agent Lorraine Broughton, dispatched to Berlin to unmask a mole on the eve of the fall of the Wall. James McAvoy (State of Play), Sofia Boutella (Kingsman), John Goodman (Argo), Til Schweiger (Inglourious Basterds) and Toby Jones (Tinker Tailor Soldier Spy) round out the impressive cast roster. Trust me, even with that title, this is going to be the coolest spy movie of 2017!

Theron, meanwhile, appears to be addicted to spying. In a separate story, Deadline reports that Universal has optioned Need to Know, a forthcoming spy novel from former CIA analyst Karen Cleveland, for her to star in and produce. (She also produces Atomic Blonde through her Denver & Delilah Films shingle.) According to the trade, the thriller follows "a wife and mother who works as a CIA analyst. One morning while digitally searching files in hopes of unmasking a Russian sleeper cell in the U.S., she makes a shocking discovery that threatens her job, her family and her life." There is no publisher yet set, but the manuscript apparently sparked an intense bidding war. Theron was also previously attached to star in a movie of the Mark Greaney novel The Gray Man, in which the book's generic male super-assassin hero was going to be changed to a woman, but we haven't heard any news on that project since 2015, so I'm not sure if she's still involved or not. The actress will next be seen in The Fate of the Furious, a project that reunites her with her Italian Job director and co-star, F. Gary Gray and Jason Statham. (The trailers make it look like this movie easily tops Die Another Day's car chase on ice.)
Posted by Tanner at 12:08 AM