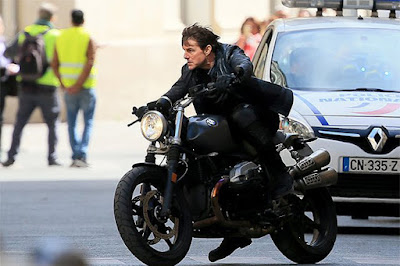 This still untitled sixth Mission: Impossible movie began shooting this week in Paris, and inevitably set photos and videos have rapidly emerged. They depict Tom Cruise performing a motorcycle stunt (presumably part of a chase) where he rides into traffic, hits a car, and flies over the handles via a harness. Hopefully Cruise and writer/director Christopher McQuarrie have something really spectacular in mind to differentiate this motorcycle sequence from the one in the last movie, or the one in M:I-2... or the ones in other recent spy movies like Jason Bourne, The Man From U.N.C.L.E. or Skyfall... or the one in Cruise's other spy movie Knight and Day. Perhaps that's not fair. After all, just about every spy movie has a car chase, and while there have certainly been good ones and bad ones over the years, I wouldn't say those ever got old. But it seems to me like spy movie motorcycle chases tend to do the same thing again and again. And a lot of the recent ones (especially Knight & Day and The Bourne Legacy) have felt like retreads of the one in Tomorrow Never Dies (1997). But I do have faith in McQuarrie, and I have no doubt there will be plenty of other stunts in Mission: Impossible 6 as well!

While there are videos all over YouTube of Cruise filming the stunt, Dark Horizons has curated a good assortment of the best ones, along with a number of photos. Check them out! No cast members besides Cruise were spotted on set so far.
Posted by Tanner at 7:51 PM