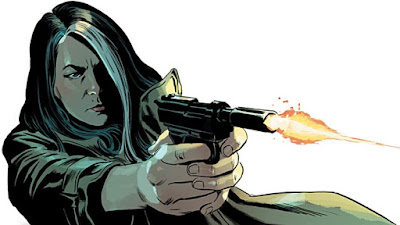 According to The Hollywood Reporter, Paramount Television is developing a series for its corporate sibling The Paramount Network (as Spike TV is soon rebranding) based on Ed Brubaker's acclaimed Image Comics series Velvet. After their historic, espionage-tinged run on Marvel's Captain America (a run which saw the introduction of the Winter Soldier and the death of Steve Rogers, and largely shaped the cinematic Cap), writer Ed Brubaker and artist Steve Epting reunited at Image to create the Cold War-era female spy series Velvet. The premise is basically, "What if Moneypenny was really a badass secret agent in her own right?" posed before Dynamite Entertainment decided to take the actual character in that direction in their own comics. Only Brubaker's premise continued "...and she had to solve/avenge the murder of 007?" It's an interesting starting point, and it fuels an exciting story rich in the conventions of the genre while also subverting them.

Kyle Killen (Lone Star, Awake) will pen the pilot script, while Brubaker and Epting themselves will serve in producing capacities. Velvet is a great comic that would make a great TV show. I really hope this makes it to series, and I really hope Paramount keeps the comic's period setting.

Want to get caught up on the comic before it comes to television? Every issue of Velvet to date has been collected in a massive (yet affordable!) deluxe hardcover edition, available from Amazon.
Posted by Tanner at 1:40 AM