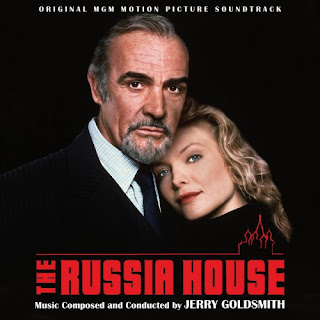 Quartet Records have announced half a quartet (sorry) of newly expanded spy scores. And the two movies are about as far apart as you can get within the same genre: Jerry Goldsmith's somber, intimate, jazz-infused score for the 1990 John le Carré adaptation The Russia House, and Burt Bacharach's infectious, iconic score for the bloated 1967 James Bond spoof Casino Royale.

Fred Schepisi’s film of The Russia House starred Sean Connery as one of le Carré’s most memorable characters, Barley Blair, a publisher who becomes unwittingly entangled in East/West spy games and a dangerous romance with Michelle Pfeifer’s Katya. James Fox, Roy Scheider, Michael Kitchen, and Klaus Maria Brandauer co-starred. Besides a romance between two of the screen’s most popular stars, the film was notable for being one of the first Western movies to be shot in Russia, and makes an excellent time capsule of the late Soviet era. Goldsmith’s score was atypical for him in that era (coming right after the more bombastic Total Recall), and remains controversial among fans of the composer and le Carré. The decision to go with a sax-driven, romantic jazz sound reflects Blair’s own musical taste. The original MCA album contained 61 minutes of music, but Quartet have dug up an additional 15 minutes’ worth of previously unreleased material including what they call “some key suspense cues.” According to the label, “the new edition was produced by Mike Matessino, with tracks prepared by Neil S. Bulk (Die Another Day) and mastered by Matessino from the original mixes by Bruce Botnick. The package includes a 16-page full color booklet with [le Carré fan] Dirk Wickenden providing in-depth liner notes and musical analysis of this masterful Goldsmith score.” 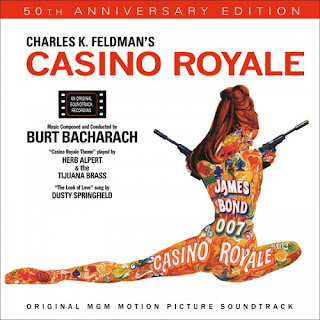 As for Casino Royale, you're probably asking, "Hasn't that score already been reissued twice in time this blog's been around?" And you would be right. (Or at least partially right, because you don't seem to be counting the Varese Sarabande reissue which was pretty much identical to the original Varese release, and apparently a subsequent reissue of one of the legitimately expanded versions.) The famous score, long sought after on LP owing to its reputation among audiophiles as the ultimate demonstration record, was first released in an expanded edition by Kritzerland in 2010. The original master tapes were allegedly damaged or destroyed, so they set about repairing the issues caused by that damage. They also attempted to replicate the vaunted sound of the LP by including as a bonus program a direct transfer of the record itself. Then in 2012, Quartet put out a 2-disc release with lavish packaging and a stellar, 60+ page book of liner notes by Gergely Hubai in honor of the film's 45th anniversary. That release was motivated by the discovery of a quarter-inch stereo tape copy of the original album in the vaults of Sony Music Spain, and new access to MGM's DVD elements which permitted a complete film score release (albeit reflecting the sound mixer's dialogue-motivated volume shifts) for the first time. Both of those releases were limited editions, and both sold out. Apparently there was even a second printing of the Quartet one. And now they are releasing a brand new 50th Anniversary edition with completely different audio. Here's the label's reasoning:


This edition is an important landmark for this legendary score, and we can proudly say that it now sounds better than ever. This new edition has been produced, restored and mastered by wizard engineer Chris Malone, rebuilding the score from the ground up. Malone’s work has focused on addressing unintended technical anomalies (such as filling dropouts and covering analogue splices) rather than broadly applying a modern sound palette. He has eschewed dynamic range compression and retained the brilliance of the original recording. Because the LP program derived from the original film recordings (with some edits made for a more pleasure listening), we have included it on our CD and added all the music composed by Bacharach that was not on the LP to make a 77-minute CD. The bonus tracks are in mono (music stems are still the only available source to date), but Chris has worked them in a very different mood from our previous edition, respecting the mono without adding any stereo reverb and carefully restoring each track in a very warm way. We can say the sound is day and night compared with our previous edition. Live and learn.

So they seem to be, sort of, apologizing for their previous version? Understanding its less than ideal sources, I never had any issues with it and appreciated its completeness. Though I still preferred the sound on the Kritzerland version, and it sounds as if Malone may have approached this new one along the same lines they did. The new Quartet release appears to be just one disc as opposed to the 45 Anniversary's double-disc version, and does not include the original booklet. It does, however, boast all-new liner notes (20 pages of them!) by film score expert Jeff Bond. It's kind of strange that this odd-duck step child of the Bond saga as by now proven to be the title most frequently revisited on CD, but they've got me curious. I'll definitely be buying this one, as I have all the others. They always sell out, so my advice is to act quickly if you've missed out on the previous limited editions.

The discs can be ordered now directly from Quartet, or pre-ordered from Screen Archives Entertainment:

Coming on the heels of La-La Land's recent expanded Die Another Day score, this winter is proving a boom time for collectors of spy soundtracks!
Posted by Tanner at 11:20 PM