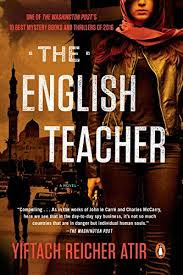 Yuval Adler's Bethlehem (2013) is the best spy movie of the last decade that no one has seen. It's truly a must-watch for any fans of gritty, le Carré-esque espionage yarns with only shades of grey and no easy answers. (It also made my list of the 10 Best Spy Movies of the last 10 years.) Which is why it's great news that Adler will be returning to the genre with an adaptation of former Israeli intelligence officer Yiftach Reicher Atir's bestselling novel The English Teacher! Only it won't be called that. According to Deadline, Adler's film version will be called The Operative (admittedly more generic), and star Eric Bana (Hanna, Munich) and Diane Kruger (Inglourious Basterds). Though it's been in my stack for a while, I still haven't read The English Teacher. (This news will probably inspire me to move it up a few notches!) But here's the publisher's description:


After attending her father’s funeral, former Mossad agent Rachel Goldschmitt empties her bank account and disappears. But when she makes a cryptic phone call to her former handler, Ehud, the Mossad sends him to track her down. Finding no leads, he must retrace her career as a spy to figure out why she abandoned Mossad before she can do any damage to Israel. But he soon discovers that after living under cover for so long, an agent’s assumed identity and her real one can blur, catching loyalty, love, and truth between them. In the midst of a high-risk, high-stakes investigation, Ehud begins to question whether he ever knew his agent at all.