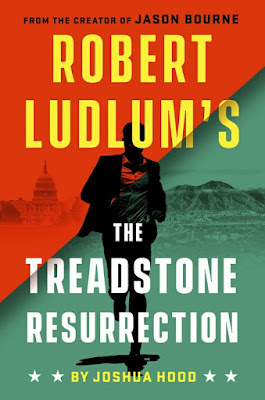 After ten Bourne continuation novels (compared to just three by the character's creator), Eric Van Lustbader chose to hang up his proverbial holster last year, abandoning his previously announced eleventh series entry. But at the time I mused that probably wouldn't be the last we'd see of Robert Ludlum's bestselling character in print. And sure enough, it's not. The Ludlum estate isn't going to let that particular cash cow rest. In fact, they're doubling down! Not only will Bourne continuation novels resume next year under the stewardship of a new author, Brian Freeman (not to be confused with Charlie Muffin creator Brian Freemantle), but this fall will see the first book in a new series spun off from Ludlum's original Bourne trilogy, based on the Treadstone 71 program that first gave rise to the deadly Bourne identity. According to the Associated Press, Joshua Hood's The Treadstone Resurrection

is due out September 17 as the first of the estate's new four-book deal with Putnam. It will be followed in 2020 by The Bourne Conspiracy by Brian Freeman. (If that title sounds familiar, it was also used for a Sierra videogame

in 2008.) Hood is a veteran of the 82nd Airborne Division and author of two military thrillers with good ratings on Amazon. Freeman is the author of multiple psychological thrillers, with three different series characters. Jason Bourne (aka David Webb) was created by Robert Ludlum and first appeared in his seminal 1980 novel The Bourne Identity (review here).

According to the publisher's blurb for The Treadstone Resurrection


The first novel in an explosive new series inspired by Robert Ludlum's Bourne universe, The Treadstone Resurrection introduces an unforgettable hero and the shadowy world that forged him...

Treadstone made Jason Bourne an unstoppable force, but he's not the only one.

Operation Treadstone has nearly ruined Adam Hayes. The top-secret CIA Black Ops program trained him to be an all but invincible assassin, but it also cost him his family and any chance at a normal life. Which is why he was determined to get out. Working as a carpenter in rural Washington state, Adam thinks he has left Treadstone in the past, until he receives a mysterious email from a former colleague, and soon after is attacked by an unknown hit team at his job site.

Adam must regain the skills that Treadstone taught him--lightning reflexes and a cold conscience--in order to discover who the would-be killers are and why they have come after him now. Are his pursuers enemies from a long-ago mission? Rival intelligence agents? Or, perhaps, forces inside Treadstone? His search will unearth secrets in the highest levels of government and pull him back into the shadowy world he worked so hard to forget.

Hm. I have to admit, I'm a little dubious.... First, this version of Treadstone seems closer akin to the version in the popular Matt Damon movies than the one established by Ludlum in The Bourne Identity novel. Which makes sense, I suppose, since more people today probably know the character and the organization from the films, but personally I would hope for the author's estate to hew closer to his books. Second, I worry that this book may fall into the same traps that ensnared the Jeremy Renner Bourne spinoff movie, The Bourne Legacy (review here). Namely, why do the same exact thing that we've seen with the actual Bourne—namely, putting another former agent on the run from his own people? Why not try something different and show an active agent working successfully with and for the program? At least that would be a fresh take. But we'll see! Maybe this book will prove completely fresh.

Treadstone will also be resurfacing soon as a new USA TV series spun off from the films. I'm sure that's the reason for the Treadstone books, but I have no idea if they'll actually tie into the show at all or not. I would guess not. Van Lustbader's continuation novels were completely separate from the movies (even if they were clearly more inspired by Damon's virile take on the character than Ludlum's aging, reluctant assassin last seen in The Bourne Ultimatum—a very decisive conclusion to the series and fitting swan song for the literary chracter), despite both sharing the title The Bourne Legacy. My guess is that will be the case with Treadstone as well.
Posted by Tanner at 9:28 PM