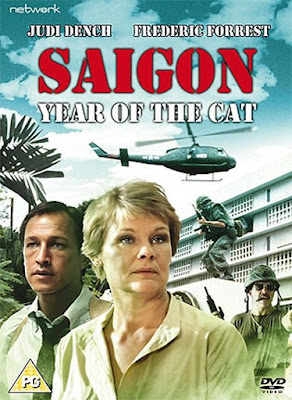 UK TV movie Saigon: Year of the Cat might be most notable today for what many of its key personnel went on to do, but it’s worth a watch as a sad historical spy movie, and does a good job conveying a strong sense of its titular time and place on a low budget. Frederick Forrest (The Conversation) plays CIA officer Bob Chesneau, stationed at the U.S. embassy in Saigon during the final weeks before the city fell to the North Vietnamese. Judi Dench (a decade before GoldenEye) plays the English bank employee, Barbara Dean, who falls in love with him at this inopportune time. The versatile Stephen Frears (who has a strange Bond connection, in that he was attached to direct the Die Another Day spinoff movie, Jinx, that ultimately fell apart) directs, from a script by playwright David Hare (who went on to write the excellent Page Eight spy thrillers). Frears frames the film as a star-crossed love story, opening with a retro-style title card and dramatic music that seem intended to evoke Casablanca, but the spy plot is far more interesting.

Chesneau receives intelligence from a good local asset, whose past record is unblemished, that the North will invade the city within three weeks. He tries desperately to convince his boss of the intel’s validity, but the station chief toes the line of official U.S. policy, insisting that an invasion is not imminent and refusing to make obvious evacuation preparations for fear of setting off a panic in the city. When the invasion does, inevitably, come, the evacuation is rushed and haphazard. Chesneau tries desperately to arrange to get all of his assets out of the country, which he had promised in good faith to do. Since the evacuation is a matter of historical record, it doesn’t seem too much of a spoiler to say that that doesn’t happen, and scenes of file cards with agents’ photos on them left in the embassy for North Vietnamese soldiers to discover, or bands of loyal South Vietnamese assets waiting nervously at their pre-appointed rendezvous points for American helicopters that will never come carry a heartbreaking, le Carré-esque sense of doom.

The love story, of course, is similarly doomed, as Barbara does what she can to get her own local bank employees out before the Communist influx, even attempting to offer up her own spot on a helicopter. While the movie is mainly talky and stagey (not totally surprising, coming from a playwright and made for Thames Television), it becomes surprisingly exciting in its final act. Hundreds of extras swarm the streets as Vietnamese refugees try in vain to gain access to the U.S. embassy, escaping personnel pack themselves onto helicopters, and embassy staff furiously push as many documents as they can into industrial shredders and furnaces. There is nothing groundbreaking in Saigon: Year of the Cat, but it’s still a fairly compelling drama set against a fairly unique historical backdrop. Roger Rees (If Looks Could Kill), Wallace Shawn (The Princess Bride), and E.G. Marshall (The Poppy is Also a Flower) round out the impressive cast.

Saigon: Year of the Cat is available on a quality DVD from Network in the UK, and in America, where it seems to be in the public domain, on various budget DVDs and compilations, as well as streaming on Amazon (free for Prime members).
Posted by Tanner at 1:30 AM

Never heard of this one. And no way can I believe Forrest and Dench in a romance. The cover art doesn't instill any desire to see this one. Forrest looks sleepy, Dench looks confused.
Still, Stephen Frears, you say. AND David Hare.