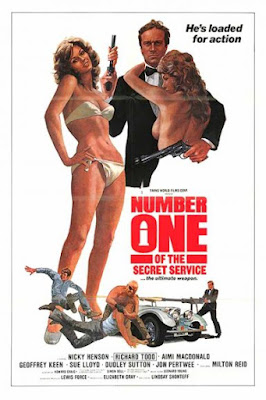 Los Angeles' legendary New Beverly Cinema (owned by director Quentin Tarantino) blew my mind today by announcing that they'll be showcasing movies helmed by exploitation auteur Lindsay Shonteff in late February! And the line-up includes two of his spy movies. No. 1 of the Secret Service (1977) is the top of bill at 7:30pm on Monday, February 27 (paired with "brutal British crime film" The Bullet Machine), and The Million Eyes of Sumuru (1967) closes out the double feature on Tuesday, February 28 (along with Curse of the Voodoo) at 9:25pm.

Shonteff first became associated with the spy genre at the height of Bondmania when he introduced the world to Charles Vine in The Second Best Secret Agent in the Whole Wide World (aka Licensed to Kill) in 1965. (Yes, the movie whose Sammy Davis, Jr. theme song is energetically sung by all the Circus staff in Tomas Alfredson's 2011 Tinker Tailor Soldier Spy!) Star Tom Adams reprised the role in two Sixties sequels which Shonteff sat out (Where the Bullets Fly and Somebody's Stolen Our Russian Spy), but Shonteff clearly felt a close attachment to the character, because he revived him under slightly altered names (for legal reasons) throughout the rest of his career with ever diminishing returns. The 1970s saw first Nicky Henson and then The New Avengers' Gareth Hunt essaying the role of "Charles Bind" in spy spoofs No. 1 of the Secret Service (1977) and The Man from S*E*X (1979), respectively, while 1990 found Michael Howe playing a Lamborghini Countach driving No. 1 in the nigh unwatchable Number One Gun. Just prior to No. 1 of the Secret Service (which one-time Bond contender Richard Todd steals as the urbane villain Arthur Loveday), Shonteff tried his hand at a serious spy movie adapting Len Deighton's Spy Story, the unofficial fourth "Harry Palmer" movie.

But his finest hour in the genre may have come in 1967 when he updated the Sax Rohmer "Yellow Peril" femme fatale Sumuru for the spy craze, with Goldfinger's golden girl Shirley Eaton once more altering her skin color to play the Asian supervillain. Nope, there's nothing remotely PC about any of it, but if you can get past the appalling casting conventions of the time, The Million Eyes of Sumuru is a thoroughly entertaining Eurospy romp! It stars Eurospy stalwart George Nader (Jerry Cotton himself!) and Dr. Goldfoot foil Frankie Avalon as the intrepid agents who go up against Eaton. Amazingly, the New Beverly will be screening a 35mm IB Tech print of this cult classic!

Now let's be greedy and hope that perhaps this Shonteff celebration will continue into March with screenings of The Second Best Secret Agent in the Whole Wide World, Spy Story, and the two Big Zapper movies. (The Big Zapper was Shonteff's female private detective turned spy, an Emma Peel wannabe who could shoot lasers out of her... well, it was the Seventies and it was Shonteff, so you can guess.)

I so wish I could join you for this. I actually saw "No. 1 of the Secret Service" on the big screen in the late 1970s. It is the "Citizen Kane" of bargain basement Roger Moore 007 homages.I file it in the so-bad-its-good drawer. And I am pleased to report that I do own a copy of the 45rpm Simon Bell theme song, "Givin' It Plenty." Try to shake that tune after you see it at the New Bev. And please post an after action report! I miss this blog!