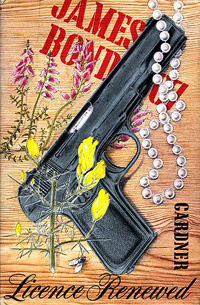 I sadly haven’t seen an obituary in the mainstream press yet, but lots of Bond websites (CBN, YBD, MI6) are reporting the death of author John Gardner on August 3, from a heart attack. He was 80 years old. Even though Kingsley Amis had taken a one-off shot at continuing James Bond’s adventures past creator Ian Fleming’s death, and Christopher Wood had penned two surprisingly good novelizations, and John Pearson had written a "biography" of the character, it was Gardner who truly continued the literary adventures of Agent 007. Commissioned by copyright holders Glidrose Productions, John Gardner appeared an unlikely choice to update James Bond for the 1980s. In the Sixties, he had been part of a strong, reactionary anti-Bond movement in spy fiction, often lumped in with Len Deighton and John Le Carre. Whereas those two wrote more realistic spy fictions, Gardner turned his pen to parody. His Boysie Oakes series was a fun but somewhat mean-spirited send-up of Bond and his world. (The first novel was made into an entertaining but not overly-faithful movie, The Liquidator, starring Rod Taylor and future Bond Girl Jill St. John with a terrific theme song by Shirley Bassey.) Boysie was a man saddled with a Bond-like job and a Bond-like appetite for women, but without the taste for killing–or flying, for that matter, quite the hindrance to a jet-set secret agent. He farmed out his deadlier assignments to a sinister hit-man, then reaped the praises of his superiors for a job well done. They’re good reading (and it’s a shame they’re out of print), but hardly the calling card of a future chronicler of the true Bond. Indeed, even after accepting the Bond assignment, Gardner cleansed himself by working on his Le Carre-esque "Secret Generations" series between Bond books.

No matter how he felt about the character, however, the author flung himself enthusiastically into his early James Bond continuation novels. As a kid who had just discovered the literary world of 007, I alternated between original Fleming titles and the then-contemporary Gardner product. And at that age, the more modern Gardner books in some ways held more appeal. (Well, that’s not quite true. Fleming knew exactly how to appeal to a young teenage boy, and even sometimes wrote off his work as "boys’ own adventures.") Gardner never tried to ape Fleming’s unique style, but put his own to good use. He generated some fantastic plots in his first batch of Bond novels, then succumbed to recycling some of them on his later ones. Ultimately, he penned 16 Bond novels, counting the novelizations of Licence To Kill and GoldenEye, meaning he actually wrote more words about the character than Ian Fleming.
For me, Gardner’s stand-out titles are License Renewed (his first, re-introducing Bond to readers), For Special Services (boasting the exciting return of SPECTRE), Win, Lose Or Die (shaking up the formula by putting 007 in a Die Hard scenario–aboard an aircraft carrier hosting a peace summit between George Bush (Sr.), Margaret Thatcher and Mikhail Gorbachev!) and the great Nobody Lives Forever, which ranks as one of the very best Bond continuation novels by any author. Nobody Lives Forever was another one that altered the usual formula, sending 007 on a Ludlum-esque chase across Europe to rescue Moneypenny and his housekeeper May from the revitalized SPECTRE while a cadre of the world’s best assassins all tried to take him out. It would still make a great movie, should EON ever decide to use other authors’ books as inspirations.

Unfortunately, John Gardner ended his Bond tenure on a low note with the appalling GoldenEye novelization (to this day I feel it must have been at least partially written by a gho 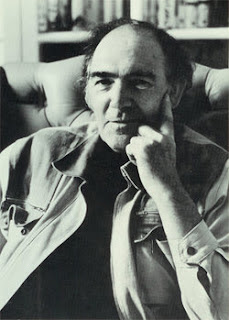 st writer; there’s no sign of Gardner’s usual style) and the lackluster swan song Cold Fall (or just Cold in the U.K.), which reintroduces one of the main characters of Nobody Lives Forever in a most unappealing manner. But now that he’s passed on, it’s a good time to look back and re-evaluate the best in Gardner’s canon. He wrote a lot of great Bond novels, and defined the super-spy for the 1980s at least as much as Timothy Dalton did. I was a fan of his, and he will be missed.
Posted by Tanner at 12:58 AM

The Gardner books were excellent for their time and I always considered them "Flemming Light"... you could knock out a Gardner James Bond novel in an evening, where a Flemming novel you took as slow and cautious as James Bond entering an ememy stronghold, absorbing every detail.
Garner's Bond Books did make me seek out the Boysie Oakes series. I noticed you were kind in not mentioning that the book version of "The Liquidator" and "Licence Renewed" has identical endings, thus avoiding direct comparisons with "Goldfinger". Those little items aside, they were always most enjoyable... my favorites were "For Special Services" (loved how Gardner couldn't resist getting Bond into situation that even made the seasoned pro wonder: the Breastless Bad girl, for instance, and his own sexuality). "Bearclaw" was the other, more for the wonderful background of the rumored attempted by Japanese Businessmen to try to destroy the American Economy in the late 1960's than the plot. That seemed the most "Flemming" of the Gardner novels: enough reality to accept the fiction.
Mr Gardner will be missed. I very much enjoyed your Obit. Keep up the great work!
- hcc (plotter)