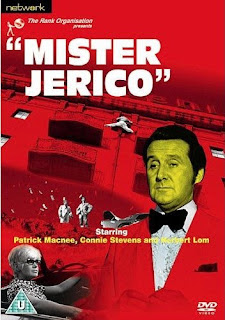 Last year, Network put out a DVD of Mister Jerico, a long-lost ITC TV movie starring Patrick Macnee made immediately after the conclusion of The Avengers, with much of the same crew behind the camera. I would have thought this release would have been greeted by Avengers fans with unrestrained jubilation, but it didn’t really make much of a splash, even in the fan community. Maybe that’s because nobody knew about it. If you are an Avengers fan–and especially if you’re a Patrick Macnee fan–Mister Jerico is well worth watching. It’s even worth picking up a $30 all-region DVD player at Best Buy for, as its unlikely to be released anytime soon on Region 1 DVD. I’ve been intrigued by this elusive title ever since seeing a single still from it in Macnee’s book The Avengers and Me, and I’m very glad to finally be able to have seen it!

Macnee stars as Dudley Jerico (presumably the writers felt that "Jerico" was too unbelievably cool a last name, so their hero should be saddled with a first name mundane enough to tether him securely to earth), a con man with an incongruous reputation for scruples. We meet Mr. Jerico (yes, that's how it's spelled) mid-con, as he relieves a wealthy American tourist of $10,000. Just as Jerico and his partner make their getaway from the man’s yacht by speedboat, their ruse is detected and the yacht’s crew give pursuit in their own launch, guns blazing. Jerico gives them the slip, Macnee peels off his unflattering fake mustache, and an impossibly awesome theme song kicks in sung by Lulu, with music by George Martin and lyrics by Don Black. According to Lulu’s website, this amazing track from a trio of Bond musicians has never before been issued in its entirety prior to this DVD release, which allows the whole thing to play out at the end of the movie rather than cutting it off when the credits end. I can’t believe it’s never made it onto some sort of Lulu compilation! (If anyone knows otherwise, please let me know, as I’d love to have it on my iPod.)


Macnee relishes his victory as Lulu croons, "A little bit won’t satis-fy him/that’s why he takes from everyone/as they pass by him! Yes, they’re pleased that they know... Mister Jerico!" and the boat skirts a beautiful Mediterranean coastline. What’s not to like? Well... Confession time: I’ve omitted one little detail. There’s Marty Allen.


With that revelation, I’ve probably lost any spy fan who’s ever battled their way through The Last of the Secret Agents or any of Allen’s other vehicles with his comedy partner Steve Rossi. In fact, it was in part Allen’s dependably irritating presence here that kept me from watching Mister Jerico for so long, even after I had the DVD. Fortunately, his part turns out to be relatively small, and though I did cringe the first several times he attempted to generate laughs by creepily ogling various beautiful women, even Marty Allen managed to grow on me by the film’s conclusion. Perhaps that’s because I was so swept up in the general charm of the whole affair, but I'll give him enough credit for it that I might give Last of the Secret Agents another shot...


The movie begins in earnest when Macnee and Allen put down their stakes in Malta (the real Malta, mind you, not an Elstree backlot!) and catch the attention of Victor Rosso, a shady millionaire with a reputation for his lack of scruples, played by the always top-notch Herbert Lom, and his secretary, Susan (an impressive Connie Stevens, sporting a blond Jean Seberg haircut). Rosso invites Jerico to his mansion for reasons that are never adequately explained, but that don’t really need to be in this kind of glossy con man caper. Neither man trusts the other, but both are ever so cordial. (We’d expect nothing less from John Steed, would we?) Rosso seems to expect Jerico to attempt to con him, and Jerico, in turn, seems to see it as his obligation. So begins a thoroughly enjoyable, gentlemanly game of one-upmanship involving a priceless diamond, its long lost twin, and more than one paste copy thereof. Complicating matters (and forcing Macnee to steal the same gem again and again) is the presence of a third party, the beautiful and mysterious con woman known only as Georgina.


Macnee charms Lom, romances both Georgina and Susan, cracks safes, dangles from hotel balconies, and models a wide array of the most hideous outfits from fashion’s darkest decade, the Seventies. Actually, this was 1969, but apparently ITC was already fashion-forward, eschewing the waning decade’s mod esprit and Carnaby flair for actual flares and velour T-shirts. Yes, Macnee’s casual attire actually includes a golden velour T, worn with shockingly orange trousers. I’m not convinced that anyone outside of an ITC program ever actually wore orange trousers, even in the Seventies, but ITC was big on them. Mister Jerico previews all the hideously camp stylings we’d see in their next generation of programming, from The Persuaders to Jason King to The Adventurer (in declining order of sartorial taste). Macnee wears one particularly perplexing purple-print silk shirt that proves remarkably versatile. It can be worn alone for a pajama-like casual look (good for sneaking about and blending into well-stocked women’s wardrobes) or dressed up with a sash, pendant and a wide-collared jacket that appears to be made out of hemp. I wish that I could provide you with evidence of all these fashion crimes, but for some reason the DVD won’t play on my computer, thus preventing screencaps. C’est la vie.


As should be evident, the appalling outfits actually added immensely to my overall enjoyment of Mister Jerico, as they do with those other, later shows. Macnee proves that his undeniable charisma was not due to Steed’s generally tasteful wardrobe, because he still manages to ooze charm even in these outfits. Furthermore, the beauty of the scenery, the women and the cars more than makes up for all the aggressive orange and purple in the costumes. I’m a sucker for a good heist or con man movie, especially if it has a Mediterranean setting, and Mister Jerico fits into that frothy genre well. It should definitely appeal as much to fans of To Catch a Thief or Dirty Rotten Scoundrels as to fans of ITC adventure shows or of The Avengers. Its tone is very much in keeping with the final color seasons of The Avengers, as well it should given its pedigree. Mister Jerico was written by Philip Levene, directed by Sidney Hayers and produced by Julian Wintle, with typically fantastic music by Avengers composer Laurie Johnson and art direction by the ever-reliable Harry Pottle.


Mister Jerico would have made a good series, so it’s a pity it wasn’t picked up. Perhaps that’s because it would have been difficult to make a con man a hero. Even though we’re told he has scruples, they’re not very much in evidence. True, Rosso is supposedly a bad guy, but it is his money Jerico’s after! As for the mark at the beginning, I think it was just his American-ness (evidently synonymous in Europe with obnoxiousness) that made him an acceptable target!


I’m only assuming that it was intended as a pilot, as it certainly feels that way. Macnee makes no mention of that, however, in his book, The Avengers and Me (recently reissued by Titan as The Avengers: The Inside Story) in which he just refers to it as a TV movie. (He does

, however, reveal that he was cast only when preferred star Robert Wagner proved unavailable, and that his casting didn’t impress co-producer Michael Eisner, who told him, "You’re too fat. You’re too old. I don’t like you in the part but, God, as you’re in it we’d better go ahead!") Likewise, I can find no mention of it in Robert Sellers’ history of ITC, Cult TV.


Whatever its origins, though, I’m very grateful to Network DVD for making this obscure film available. They even provide some wonderful extras from the vaults: two Macnee chat show appearances, and one with Herbert Lom. These appearances have nothing to do with Mister Jerico, but they are nonetheless interesting viewing for fans of the actors. The later Macnee one was done to promote the ‘97 movie version of The Avengers, which he speaks very highly of, something I’m sure he regrets today!

UPDATE: For American Macnee fans without all-region DVD players, you can now stream Mister Jerico on Amazon!
Posted by Tanner at 8:50 PM

Tanner, this is my favorite review of yours and I can't believe there haven't been any comments on this truly forgotten treasure! It may just be the reason I finally buy a region-free DVD player and get "Mister Jerico"! I, too, love this era (roughly 1969-73) and this would be a great time capsule of that moment in time. I wonder if the clothing in ITC productions of this era were worn in Europe? It seems that the hippie style was more popular in the U.S. than in Europe. If any 1960s "relics" out there can set this straight, I hope they comment here.

I can remember watching Mr Jerico one afternoon near Christmas, circa 1979.
I have not seen the film since, but the theme tune always stuck in my mind.
I had no idea the theme tune was sung by Lulu, or the Patrick McNee was Mr Jerico. All I can remember is the theme tune and the Mediterranean settings. So I decided to look it up on the web, and hey presto!
Not bad for the memories of a ten year old boy!
Tosh.

Thanks, C.K.! It's one of my favorites, too. I should find an excuse to unbury it somehow! I, too, would love to know if the ITC style of the time at all reflected actual European trends!

Tosh, I'm glad to be of service in helping track down that lost childhood memory! Was that in America or the UK or elsewhere that it ran on TV in 1979?

Thanks for the nice review. I will watch Patrick Macnee in anything, so I also saw this on network TV in US, not sure of the date, but it could very well have been in 1979, perhaps earlier.

Thanks, Edie! It's nice to have confirmation that it indeed ran on US TV sometime in the Seventies. I still wish it were more well known--or on DVD on this side of the pond.

A long forgotten treasure indeed! Even after all these years the catchy theme song is still in my head and finally I find out who played the title character! Thank you so much for this review and for bringing back a childhood memory.

You're very welcome, Amina! Now if only someone would release that catchy theme song an a CD or iTunes or soemthing... I'd sure love to have it!