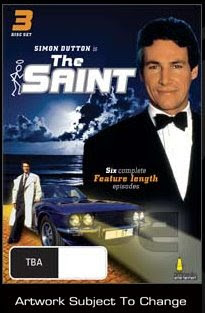 On June 30, one of my two favorite foreign DVD companies, Umbrella, will release the elusive Eighties incarnation of The Saint in Australia! The PAL Region 4 three-disc set will include all six two-hour TV movies starring Simon Dutton as Simon Templar. (In a strange coincidence, according to IMDB trivia, Dutton was actually named after Templar!) The titles are: The Brazilian Connection, The Blue Dulac, Fear In Fun Park, The Software Murders, The Big Bang and Wrong Number. Guest stars include John Astin, Richard Roxburgh, Gayle Hunnicutt and Vince Edwards, and at least one episode was actually written by Alex Rider creator Anthony Horowitz! Umbrella has yet to list the release on their official website, but it's already available to order on EZDVD. No extras have yet been announced. My other favorite foreign DVD distributor, Network, was previously rumored to be working on a UK release of this series that would also include the even more obscure 1987 TV movie The Saint in Manhattan, starring mustachioed Magnum-clone Andrew Clarke as a Lamborghini-driving Australian Saint, but such a set has yet to be officially announced.
A big thanks to David Foster for the alert! 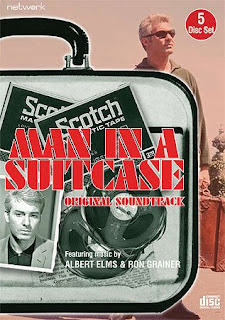 Man In A Suitcase Soundtrack

Speaking of Network, they do have a big spy release in the offing... but it's a soundtrack, not a DVD. Following up on their successful Prisoner and Randall & Hopkirk, Deceased CDs, the company will issue the first ever soundtrack for the cult Sixties ITC Richard Bradford spy series Man In A Suitcase! The whopping five disc set will be available to own June 2 and include over 300 pieces of music by Ron Grainer and Albert Elms, as well as (sure to be extensive) liner notes by cult TV sage Andrew Pixley. Retail for this massive set is expectedly high, at £39.99, but it can currently be pre-ordered directly from Network at a considerable discount.
I love that Network is making good on their promise of using rare vault elements to create definitive soundtracks for many of the cult TV series they offer on DVD. Now if only they'd turn their attention to Ken Thorne's amazing, amazing incidental music from The Persuaders, that would be a dream come true for this soundtrack lover...
Dangerous Assignment
Meanwhile, back in the USA, TVShowsOnDVD reports that Infinity Entertainment will release Dangerous Assignment: The Complete Series on May 20. The five-disc set included all 39 episodes of the 1950s NBC series, which starred Brian Donlevy as American secret agent Steve Mitchell. I've never seen this show before, but it sounds pretty cool. The press release offers up this nifty bit of tough guy narration: "Yeah, danger is my assignment. I get sent to a lot of places I can't even pronounce. They all spell the same thing, though: trouble." Retail is $39.98.
Posted by Tanner at 5:56 PM