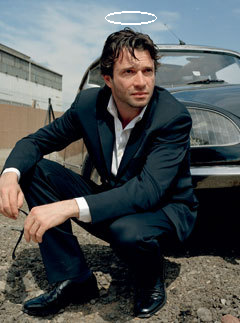 More On The New Saint

David Foster wrote to point out an excellent story I had missed over at Cinema Retro about the new Saint TV series, starring the perfectly-cast James Purefoy as the latest incarnation of the irrepressible Simon Templar. Of all the new series in development or pilot stage, this is the one I'm most excited about. Yes, even more than Joss Whedon's Dollhouse. I love many previous versions of The Saint (especially Roger Moore's and Ian Ogilvy's turns), and I want this new one to be good. I also want it to erase the bad memories of the Val Kilmer movie. Will it? Here's what Cinema Retro has to say:

Simon Templar is part of a secret organization known as 'Knights of the Templar'. He's responsible for enforcing the group's code of ethics against the criminal underground of the world. Those familiar with 'Knights' know Simon Templar by one name: The Saint. His current assignment has him in Montenegro, rescuing captive children from being sold on the black market. When the operation is finished, Templar discovers that one of the children is missing.

Frankly, I'm not into the whole Knights of the Templar business. But I do recognize that the TV landscape has changed drastically since the Sixties, and viewers are likely to be less accepting of a gentleman adventurer who just happens into damsels in distress week after week. It makes sense to give him a background that offers "assignments." What I don't understand is why the producers couldn't just go with Leslie Charteris' original background for Templar. Make him the "modern day Robin Hood of crime" he was often referred to as, a reformed thief who now targets only those he deems deserving? That aspect had to be somewhat softened in Roger Moore's day, but surely it would be fine in today's permissive television environment?

Beyond that questionable premise, however, things sound pretty good. The synopsis offered for the Barry Levinson-directed pilot could easily be an episode of either the Moore or Ogilvy series, and I couldn't really hope for more than that. A lot will depend on Purefoy, and based on what I've seen of his previous work, I believe he has the charm and humor necessary to win audiences over as the new Saint. Head on over to Cinema Retro or to the official site of Leslie Charteris to read more, and to see a piece of promotional artwork for the new series.

Email ThisBlogThis!Share to TwitterShare to FacebookShare to Pinterest
Labels: The Saint, TV