The latest neo-Eurospy action confection from Luc Besson’s prolific EuropaCorp is neither particularly “Euro” (in terms of locales, at least; there’s plenty of Gallic money involved) nor “spy” (outside of a sleazy CIA agent character), but it still manages to typify the genre. Colombiana may not quite be a spy movie, but it’s bursting with all the neo-Eurospy spirit with which Besson has imbued such mid-range action hits (and occasional misses) as Taken, From Paris With Love and the Transporter series. It’s written, in fact, by the Taken team of Besson and Robert Mark Kamen, and directed by Transporter 3 helmer Olivier Megaton (who’s also attached to direct Taken 2), and fans of those films will find plenty to like in Colombiana as well. 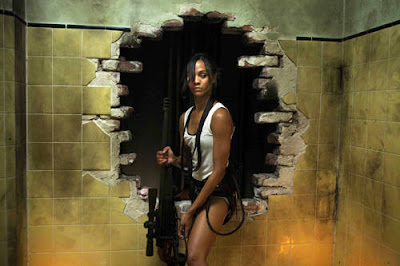 Colombiana (a kind of arbitrary title despite the initial setting) begins in 1992* when a young girl named Cataleya (Amandla Stenberg) witnesses the deaths of her parents at the hands of a cartel killer named Marco (Knight and Day’s Jordi Mollà). She knows that Marco is working for drug kingpin Don Luis (Betto Benites), the sort of well-heeled bad guy who’s always got “Ave Maria” playing at his mansion. 12-year-old Cataleya vows on the spot to kill Don Luis, plunges a knife into Marco’s hand and dives out the window, leading his goons on a breakneck parkour chase across the scenic roofs, streets and sewers of Bogota. This would be a pretty awesome action scene in any movie, but the fact that it’s a little kid versus heavily-armed hoodlums makes it that much moreso. Young Cataleya still has a few more audience gasp-inducing shock value surprises up her sleeve before growing up to be Star Trek’s Zoe Saldana. 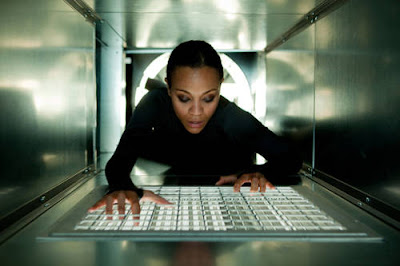 Inspired by Xena, Warrior Princess (an anachronism if we take the 1992 date at face value, but still a cool reference) and under the tutelage of her uncle Emilio (Missing’s Cliff Curtis, having a blast doing Tony Montana), Cataleya has become a world-class assassin. We first witness her skills in one of the film’s many virtuoso assassination setpieces in which she infiltrates a heavily guarded police station and slays a prisoner being held in one of its cells before making a clean getaway. Best of all, she does this in a skintight (and I do mean skintight!) Diabolik-style catsuit. (The specific Diabolik reference is probably just a coincidence, but a scene shortly thereafter in which she dances to a Phoebe Killdeer song** with the lyrics “Deeper Down” makes me wonder…) Another sequence finds her penetrating a villain’s compound by swimming in through his personal glass-topped shark tank, Thunderball-style, and emerging through one of the panels of his see-through floor. It makes a great visual and a striking entrance. Some of the assassination scenes are remarkably similar to those in the 2011 Jason Statham Mechanic remake (as is a New Orleans location; perhaps Louisiana’s tax incentives are especially enticing for assassin movies?), but Megaton executes them with far more style than Simon West. 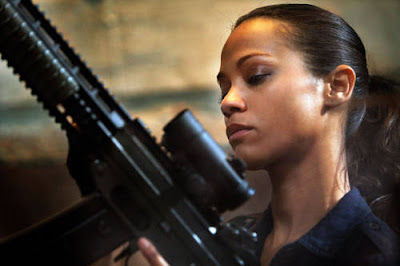 Saldana acquits herself very nicely as an action heroine, and even manages to bring a bit more compassion and humanity to her single-mindedly revenge-bent character than seems to have been on the page. She’s far too skinny to make a convincing combatant, but (presumably for that reason) her character doesn’t actually engage in hand-to-hand combat when she can help it. Cataleya prefers guns. (Never mind that the recoil from some of the gargantuan ordinance she favors would probably knock her featherweight frame back to Colombia; Besson knows that there’s something inherently sexy about a waif with a big gun, and Saldana brings the sexy!) When she does finally find herself in a close-quarters, unarmed brawl, she loses her near-superhuman Lady Terminator edge and finds herself more evenly matched, even with an opponent twice her age. Thus the stakes are successfully raised exactly when they need to be. 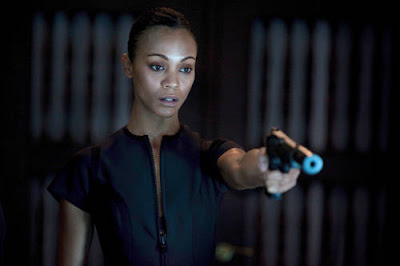 All of Cataleya’s killings are signed with a lipstick drawing on her victims’ bodies of a Cattleya orchid in an attempt to get the attention of Don Luis. The former drug kingpin has proven particularly tough to track down because he’s been relocated to the USA (the aforementioned New Orleans, of course) under the protection of the CIA. The precise reasons for this are never made entirely clear, but this isn’t the sort of movie that needs to clarify its reasons. (From Paris With Love, another Besson production, even made a good joke out of how boring the producer apparently finds superfluous exposition.) Eventually Cataleya succeeds in getting his attention this way—as well as that of the FBI. Their investigation is led by Lennie James (a standout in Human Target and one of the many fine actors whose talents were utterly wasted in that lame Prisoner remake, here channeling a skinny Forrest Whitaker), a generally underused actor whose mere presence tends to elevate the material he’s in (well, except for The Prisoner, but that wasn’t his fault). Sure enough, he makes the most of all of his scenes here—particularly an office visit to that sleazy CIA agent that Cataleya crashes. All this attention makes it hard for Cataleya to carry on a normal(ish… sort of) relationship with Alias’ Michael Vartan, here stuck in the mostly thankless “assassin’s boyfriend” role ripped right out of Besson’s La Femme Nikita. (Vartan’s Danny is differentiated from that movie’s Marco in that he’s a hilariously bad painter instead of a would-be boat-maker.) 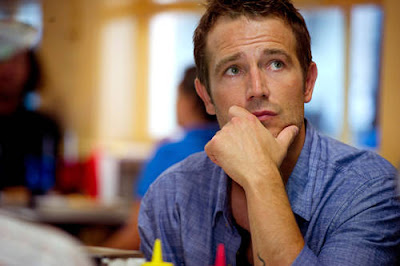 That Nikita connection is hardly coincidental. The waifish female assassin with an affinity for heavy artillery is not new territory for Luc Besson. He knows this terrain like the back of his hand, and does it better than just about anyone else. While Colombiana incorporates a lot of elements from Besson’s directorial efforts Nikita and The Professional (in fact, I wouldn’t be surprised if parts of this script are recycled directly from his scrapped Professional sequel), Megaton’s film never achieves the rich characterizations or operatic destruction of those movies—though it comes close on the latter front. 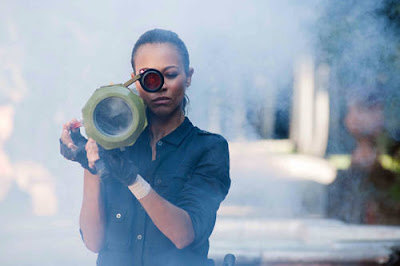 Megaton’s early action sequences successfully echo Besson’s meticulously orchestrated mayhem, in which he clearly defined the spatial relationships between all participants and then gave audiences a clear view of exactly how the action unfolded. Unfortunately, Megaton abandons that style for the climactic confrontation between Cataleya and her persecutors, opting instead for frenetic, strobe-like editing. That’s a shame, because her final fight with Marco looks to be brutal and well-choreographed from what you can make out of it. The editing might, in fact, be intentionally obscuring some of that brutality in order to secure the film its PG-13 rating. Colombiana redefines the notion of a “hard PG-13” with enough violence and nudity (or near nudity, at least; that catsuit is revealing!) that it should tide over even the most demanding action fans pretty well until the inevitable Unrated Blu-ray release. Add to that some fantastic locations, a very impressive supporting cast, a handful of those Taken-style shock moments we’ve come to expect from these EuropaCorp actioners, a really cool cover of Portishead’s “Glory Box” by John Martyn and Johny Cash’s version of “Hurt”… and that catsuit… and you’ve got yourself another highly entertaining example of the mid-budget action extravaganza—or neo-Eurospy movie—as only Luc Besson can make them. And as the first female heroine in this relatively recent subgenre, Saldana ably proves herself in the ranks of Statham, Neeson and Travolta.

*At least “1992” is what the on-screen caption says; other clues, like a Xena comic book and the fact that the rest of the action takes place “15 years later” would seem to indicate a setting closer to ’96. Perhaps it was scripted as beginning in the mid-Nineties, then changed to ‘92 in post-production to better reflect Zoe Saldana’s age?

**“Fade Out Lines” by Phoebe Killdeer and the Short Straws
Posted by Tanner at 12:26 AM

Great review of my favorite action flick of the year. The opening sequence alone make it worth seeing, and the assasination in the jail is icing on the cake. Most enjoyable.

Thanks, Bish! Yeah, Colombiana was tons of fun!

I did see The Debt (actually the same weekend I saw Colombiana), and I'll get a review up eventually. Unfortunately, I didn't enjoy it quite as much as several commenters around here seemed to, so my review might disappoint...