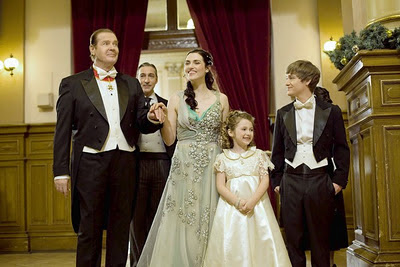 In the United States, Bonded Templar Sir Roger Moore returns to television tonight on the Hallmark Channel, where he stars in the family holiday movie A Princess For Christmas (formerly known as Christmas at Castlebury Hall). Katie McGrath and Charlotte Salt co-star. According to the L.A. Times, Sir Roger plays the "fabulously wealthy" and "Scrooge-like" Duke of Castlebury, whose "heart begins to melt" upon the arrival of his estranged young American niece, nephew and their aunt to his castle in the snowy countryside of a fictional European kingdom. Most of those phrases would normally put me off of a movie like this, but the appeal of the former 007 star is too much to ignore. The 84-year-old Moore rarely acts these days, devoting the bulk of his time to his UNICEF duties. He made headlines earlier this year when he was injured filming this movie in Romania. 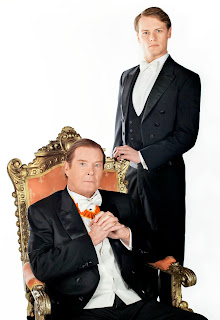 The big question, of course, is which dignitary of a fictional European country is more curmudgeonly: Moore's Castlebury, or Timothy Dalton's Boris Pochenko from The Beautician and the Beast? Dedicated fans can find out soon, because A Princess For Christmas airs tonight (Saturday, December 3) at 8/7c on the Hallmark Channel. Or, if you want to save time, this extra-long trailer seems to condense the entire movie. (It also reveals that, in true Brett Sinclair fashion, Moore dons a cravat.) Watch till the end and you'll even see the Grinchy Duke's heart grow three sizes that Christmas.

I know Sir Rog is getting on in years now, but what have they done to him in those photos? Either it's (VERY) heavy makeup or they've airbrushed the photos.

Either way, it looks as if he's been embalmed. Ghastly.

Predictable but still great to see Sir Roger in something.