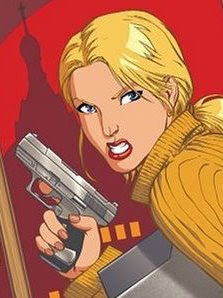 UNCLE who? While spy fans have been focused on other (admittedly exciting) topics for the past week, Fox has apparently been slowly moving forward once again on a spy project so exciting that it eclipses nearly all others in my own mind: the long-gestating Queen & Country movie, based on Greg Rucka's excellent, excellent series of comic books and novels! We haven't heard any movement on Queen & Country since 2009, when Peter Chernin came on board as a producer. That's a long time to remain dormant, and I'd feared the worst. But today, The Hollywood Reporter reports new movement... major movement! According to the trade, Ellen Page (Inception, Juno) is in negotiations to star as British secret agent Tara Chace. Peter Chernin (Rise of the Planet of the Apes) is still producing, along with Jenno Topping (I Spy, Charlie's Angels). The script of note is by Ryan Condal (Hercules: The Thracian Wars), who joined the project back in 2009 following previous drafts by Rucka, John Moore and Leverage creator Jon Rogers. I'd say it's a good sign that his script is deemed solid enough to last this long in the development process. According to the trade's log line, the film version of Queen & Country "tells of a British SOS [sic] operative named Tara Chace whose identity is compromised after she carries out an assassination." (Tara is actually a "minder" for the SIS, better known as MI6. Minders are roughly the equivalent in Rucka's world of le Carré's scalphunters, Fleming's Double O's, or, most directly, The Sandbaggers' sandbaggers. They're the special section.) This is basically the same log line that we've been hearing for years on this project, and still leads me to believe that the script is culled primarily from the first two arcs of Rucka's comic book, both of which are collected in Queen & Country: The Definitive Edition, Vol. 1 (an absolutely essential read for serious-minded spy fans!).

I unabashedly love Queen & Country. In my third ever post on this blog, way back in 2006, I called it "the best current, ongoing spy saga in any medium." Seven years later, I totally stand by that... except for that fact that with no new entry since 2011's novel The Last Run, I'm not completely sure it can still be called "ongoing." But even in the age of wonderful spy television like Homeland and The Americans and a renaissance for the James Bond moives, I still stand by Q&C as the best in any medium! It's simply great stuff, combining the Desk and Field sides of the serious side of the spy genre as well as past masters like Len Deighton's Samson series or Queen & Country's primary acknolwedged inspiration, Ian Mackintosh's Seventies TV classic The Sandbaggers. The entire run (to date) of the fantastic Oni Press comic book is collected in four oversized "definitive editions." These, along with the novels A Gentleman's Game, Private Wars and The Last Run comprise the entirety of the Tara Chace saga, again to date. In 2007 I came up with my own dream cast for a Queen & Country movie here. Ellen Page was not on my radar at the time, but I think she's an excellent actress and provided she can manage a convincing British accent (I'm guessing she can), she should prove a terrific choice! My other choices are probably a bit too old now to play opposite Page, but I stand by my selection of Hugh Laurie for the crucial role of section head Paul Crocker nonetheless! (Peter Capaldi would also be excellent, if a bit on the nose, but of course he's not tied up for the forseeable future with Doctor Who.) It will be interesting to see who ends up filling those roles, but I hope that Laurie (who made Fox a fortune during his years on House) is on their shortlist.

I really hope that Page signs on, and that her casting paves the way for this movie actually getting made! (And then I hope that inspires Rucka to revive the comic book, as he's been promising to do for many years now.) This is definitely one to keep an eye on. A series of Queen & Country movies could be the best thing to happen in the spy genre since Tinker Tailor!
Posted by Tanner at 2:16 PM

This is great news. I think Ellen Page has the potential to be a great Tara Chace. And I agree with your assessment of 'Queen & Country.' Greg Rucka is a very skilled writer. I'm particularly fond of his Atticus Kodiak novels. The final three are especially appealing to fans of international intrigue and skullduggery.

Good news! According to Greg Rucka in a "Comics Should Be Good" podcast (it's the one reviewing "Lazarus #1"), Queen & Country series 2 should be hitting shelves around midway through 2014!

This is very interesting news! I only have Vol 1 of Q &C and Q&C Declassified, but I was much impressed with them. Very close in feel to The Sandbaggers series. Done properly, a " Queen &Country" film will be brilliant.
Nice job, Tanner!

I agree, Teeritz; done right it could be the makings of a truly amazing franchise! Maca333, that's good news. I'm not holding my breath though, as he's been saying that for years! But hopefully it finally comes to pass next year. That would be great! Le Samourai, I haven't read any of the Kodiaks. I LOVE Q&C and I've read a lot of Rucka's other comics, but I haven't read any of his novels outside of Q&C. I'll have to check those ones out.

On his tumblr blog (http://ruckawriter.tumblr.com/), Rucka called the potential casting of Ellen Page "rather wonderful news."

If you'll pardon the self-promotion, you can read my thoughts on the Kodiak books here: http://tinyurl.com/otaorhl