Fleming: The Man Who Would Be Bond Premieres Tonight on BBC America 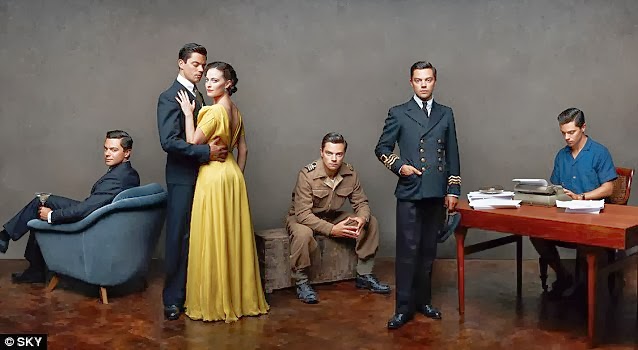 The Sky/BBC America co-production Fleming: The Man Who Would Be Bond premieres tonight on BBC America at 10pm Eastern. The four-part miniseries first announced a year ago stars Dominic Cooper (Captain America, Agent Carter) as 007 creator Ian Fleming, focusing on his wartime exploits in Naval Intelligence. John Pearson, author of The Life of Ian Fleming, serves as a consultant on the miniseries, which is written by John Brownlow (who previously chronicled the life of another famous 20th century author in Sylvia, which co-starred Daniel Craig) and Don Macpherson (who penned the 1998 feature film version of The Avengers, but shouldn't be blamed for the end result, as his original script was, in my opinion, quite a good tribute to that classic spy series). Mat Whitecross (who helmed the odd Spooks/MI-5 spinoff Spooks: Code 9) directs. Rupert Evans (Hellboy) plays Peter Fleming; Lara Pulver (Sherlock) plays Ian's future wife Ann, and Samuel West (Cambridge Spies) plays Fleming's Naval Intelligence boss Admiral Godfrey.

Watch the BBC America trailer for Fleming: The Man Who Would Be Bond or the intriguing Sky trailer (which makes excellent use of the fantastic AwayTEAM remix of Shirley Bassey's "Where Do I Begin" from the Bassey remix album) below. Or watch a very promising making-of featurette (better than either of the trailers) here.