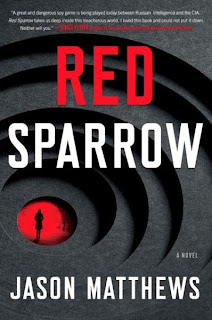 According to The Hollywood Reporter's Heat Vision (via Dark Horizons), Darren Aronofsky (Black Swan) has opted not to direct the spy movie he'd been flirting with, Red Sparrow, based on the novel by Jason Matthews. This is too bad. Not only am I a big fan of the director who was looking forward to seeing what an Aronofsky spy movie would look like, but I'm also a fan of the book, and eager to see it become a movie. Luckily, the trade blog adds that "Fox is still high on the project, which it picked up in a seven-figure deal in April 2013 for Steve Zaillian and Garrett Basch of Film Rites and Peter Chernin of Chernin to produce." So hopefully the project will continue to move forward even without Aronofsky. There's even a chance, according to Heat Vision, that the studio could re-approach Aronofsky in the future once it has a viable script. For now, they'll focus on hiring a screenwriter. (Hand goes up.)

I enthusiastically recommend the novel Red Sparrow. Matthews spent a whole career in the CIA before turning his hand to fiction, and his book benefits from all of his experience, dripping with apparent verisimilitude. The characters are rich, and the locations exactly what I want from a good spy yarn, jumping the globe from Moscow to Helsinki to Washington to New London to Rome and beyond. There are moles and double agents and betrayals and tradecraft aplenty. There is also, in the proud tradition of Ian Fleming, lots of good food consumed, and in a neat gimmick unlikely to be included in the film, Matthews provides a recipe at the end of each chapter for one of the dishes discussed. It's a two-hander between Russian SVR agent Dominika Egorova and CIA golden boy Nate Nash (yes, it sounds like a name concocted by Stan Lee), but Dominika is the juiciest part. With Aronofsky on board, I previously speculated that he might reteam with his Black Swan star Natalie Portman (who would definitely be good in the role), but perhaps without him the door will be left open for former Bond Girl Olga Kurylenko. I actually pictured Kurylenko in the role as I read the book. I just hope the project continues to move forward.
Posted by Tanner at 11:15 PM