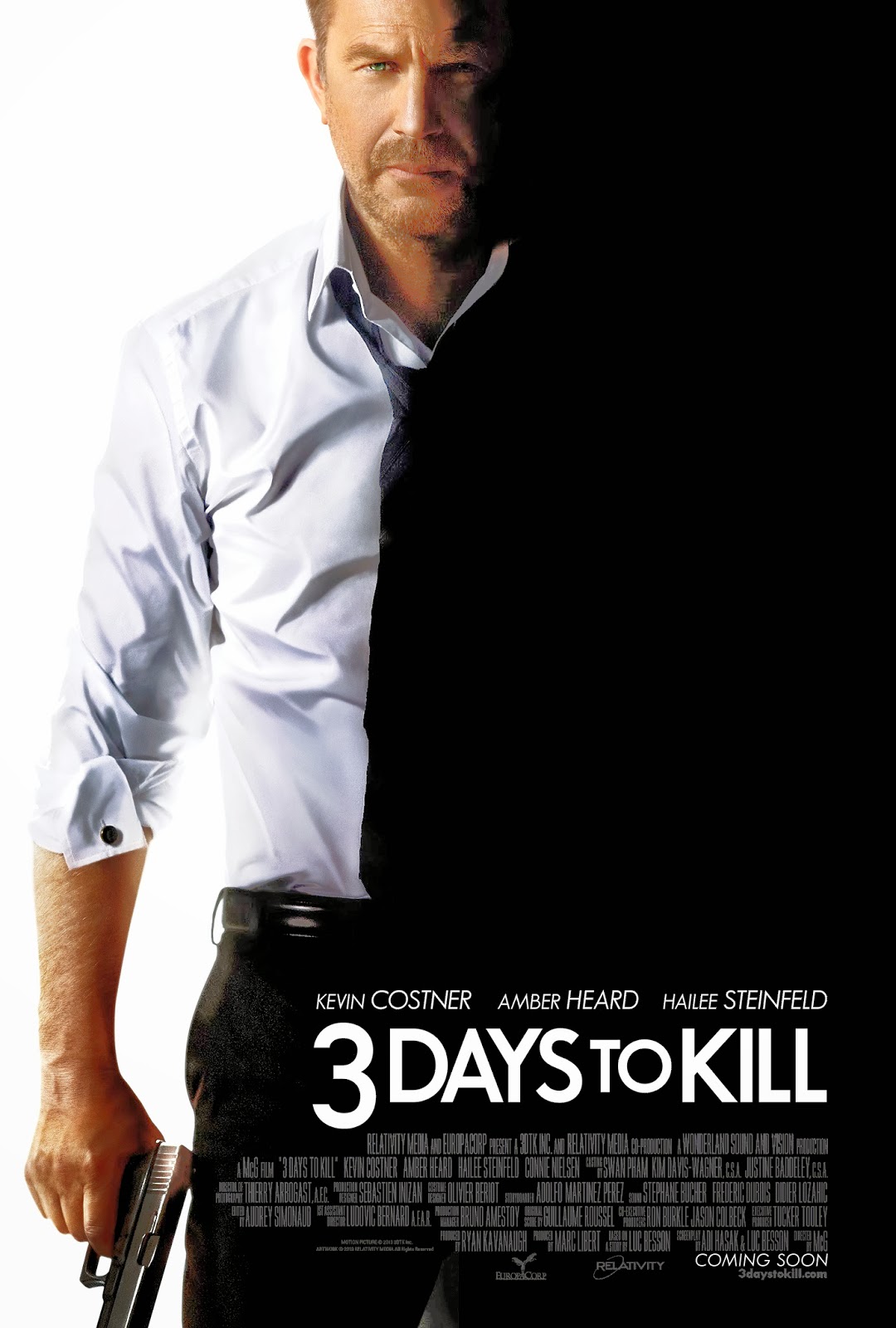 3 Days to Kill is a fun spy movie that might be the most Besson of all of the Luc Besson-produced neo-Eurospy movies to date. (Since the success of The Transporter, his company, EuropaCorp, has reliably churned out mid-budget spy/action movies made with European locations and at least partly European money, most starring slightly over-the-hill Hollywood stars looking for a late career comeback as an action hero. In other words, they’re following the reliable formula of the Sixties "Eurospy" genre, and generally doing an entertaining job of it.) That’s not to say that it’s the best Besson-produced action flick; it’s to say that it’s the most. Besson did not direct 3 Days to Kill, but he co-wrote it (with his Taken collaborator Adi Hasak) and produced it. McG directs, in a style that feels like an homage to Besson. Introducing last week’s Hollywood premiere, the director said that Besson’s early movies like La Femme Nikita and Leon were huge influences on him, and nowhere is that more evident than in 3 Days to Kill. Unlike Besson’s usual go-to helmer of late, Olivier Megaton, McG is a director who understands how to make a comprehensible action sequence to begin with. Add to that a stylistic nod to Besson, who’s one of the all-time masters of the action setpiece, and we’re left with a number of excellent action scenes in 3 Days to Kill. But also true to Besson’s own proclivities, we’re left with a wildly uneven tone that veers haphazardly between spy action and family dramedy, odd ethnic-based comedy, unbelievable coincidences, and schmaltzy, never quite credible, almost creepy scenes between a father and a teenage daughter. Yes, all of the best and worst of Luc Besson is present and accounted for in 3 Days to Kill, hence its claim to the title of the most Besson movie to date. That dooms it to inevitably negative reviews, but if you’re a fan of the French director/producer, you’ll find a whole lot to like. Not only has McG crafted an undeniably Besson action film, but he’s also made a better Besson movie than the last real Besson movie, The Family! 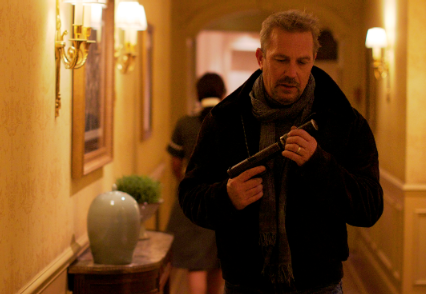 Kevin Costner (No Way Out), fresh off a solid supporting spy role in the somewhat underwhelming Jack Ryan: Shadow Recruit, steps into the limelight again as top CIA assassin Ethan Renner. (Now there’s a name contrived to conjure images of Mission: Impossible!) In the highly impressive opening action scene (which is never quite equaled), Ethan is part of a mission to take out a ruthless international terrorist arms dealer, The Wolf, and his sadistic henchman, The Albino, at a Belgrade hotel. Both baddies are played by superbly cast career Euro villains, the former by Richard Sammel, who has previously menaced both James Bond (as the eyepatched baddie Gettler in Casino Royale) and OSS 117 (as the Nazi Moeller in OSS 117:Cairo Nest of Spies), the latter by the supremely creepy Tómas Lemarquis. The mission goes spectacularly wrong, but Ethan still puts in a good showing until he’s felled by some sort of seizure, and the villains get away. 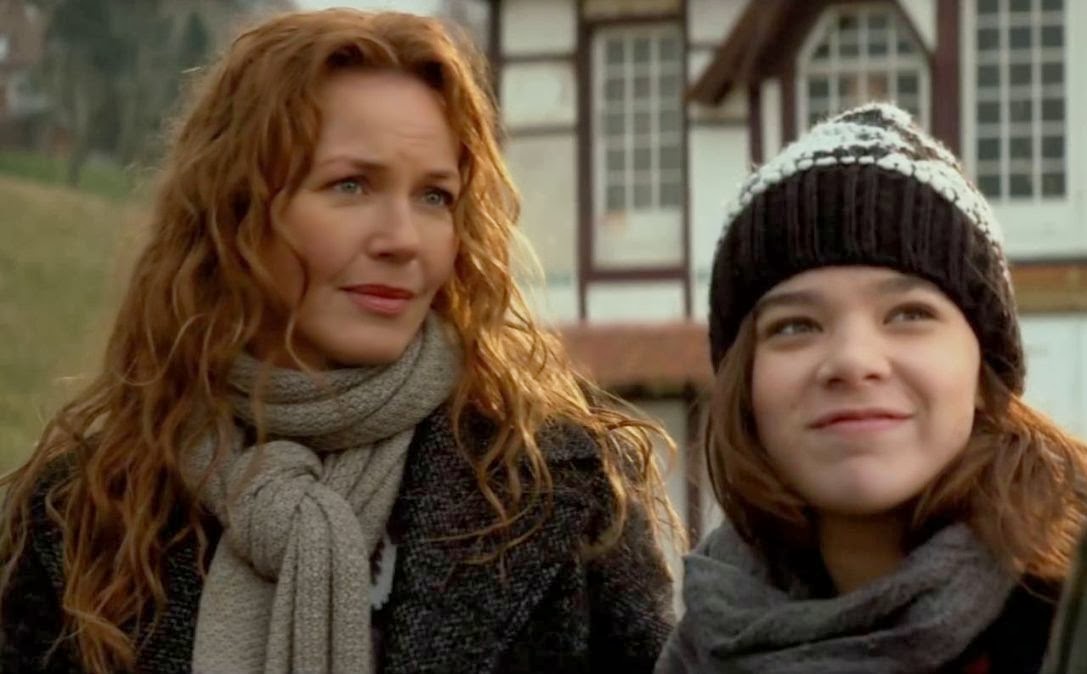 The cause of the seizure is revealed to be advanced terminal brain cancer, effectively putting an end to Ethan’s CIA career. Retired and dying, he heads to Paris to reconnect with his estranged wife and daughter, Christine (Gladiator’s Connie Nielsen) and Zoey (True Grit Oscar nominee Hailee Steinfeld). Going through her difficult teenage years without a dad (and unaware of his condition), Zoey is naturally resistant to her father’s attempts to reinsert himself into her life. Christine gives Ethan a similarly cold reception until he’s forced to reveal that he’s dying (in order to get her to sign the proper papers to put his affairs in order), at which point she allows him to take care of Zoey for three days while she flies to England on business. From Zoey’s attitude (and her preference to spend time with her older boyfriend instead of her dad, or to go to raves with her friends instead of the amusement parks Ethan took her to when she was 9), it’s clear these will be a challenging three days for Ethan already. But they’re made all the more challenging when the impossibly glamorous CIA agent Vivi Delay (Machete Kills’ Amber Heard) roars into his life in a Peugeot RCZ. (I’ll bet anything her driving scenes were added after Besson or McG saw her on Top Gear!) 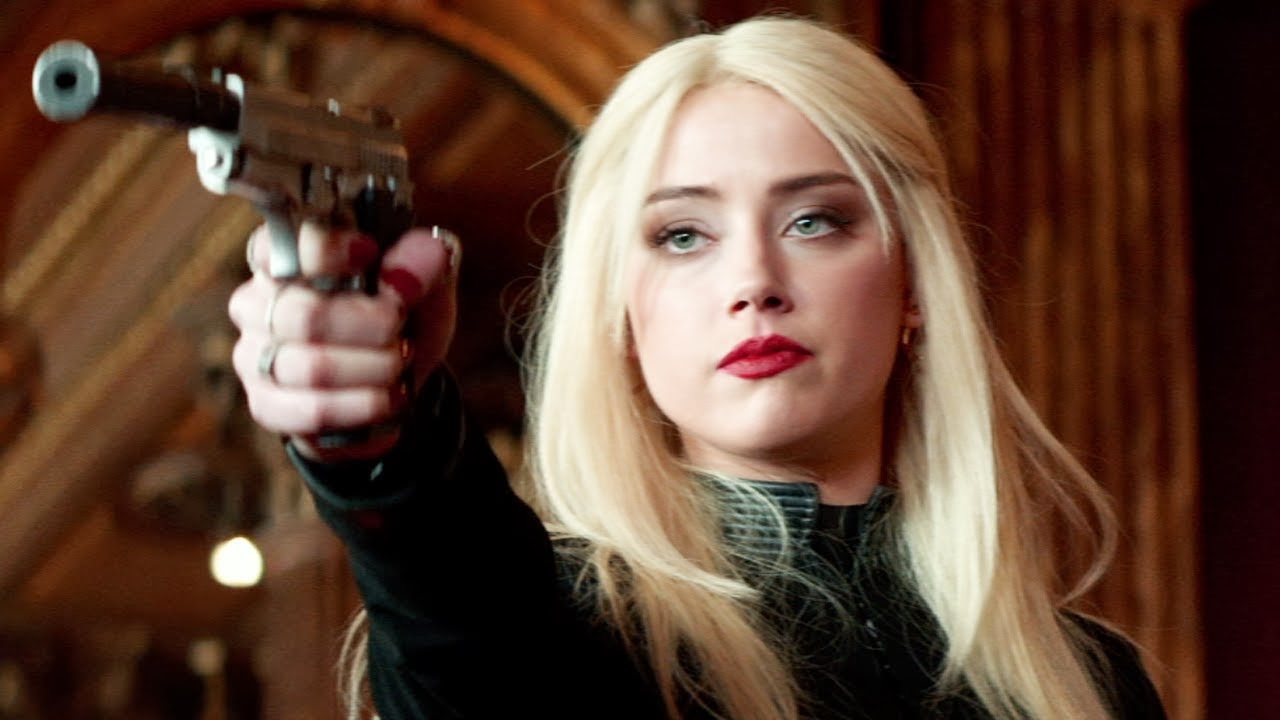 Vivi wants Ethan back on the job, because he’s the only man who’s ever seen The Wolf in person and can identify him. And she offers him about the only incentive a man in his position can’t possibly pass up: a new lease on life, via an experimental drug with unstable side effects. So he accepts this final mission, and she tasks him with killing The Wolf. It’s left entirely unclear why a sick man taking a drug that leaves him prone to sudden hallucinations is sent on this mission alone. Surely another agent in better condition could accompany him to pull the trigger when Ethan identifies the target—even Vivi herself, who’s presented as more than capable. (In my imagination, every time something like this comes up in a story conference on a Besson movie, the discussion ends with an exaggerated Gallic shrug and a thickly accented “’oo cares?”… and I don’t really have any problem with that!) Vivi is a bit of an enigma. In her first appearance at Langley she’s dressed roughly how one might expect an ambitious young female case officer to dress, but in every subsequent scene she’s glammed up like Fatima Blush designed her wardrobe, and accompanied by music that nearly a century of sound cinema has conditioned us to associate with human incarnations of the Devil. While these clues might seem like incredibly unsubtle hints that she’s some sort of double agent, that’s not the case. It’s just how she’s presented, and it’s another one of those odd little touches that left me scratching my head, but which prove entirely forgivable in a Besson film. 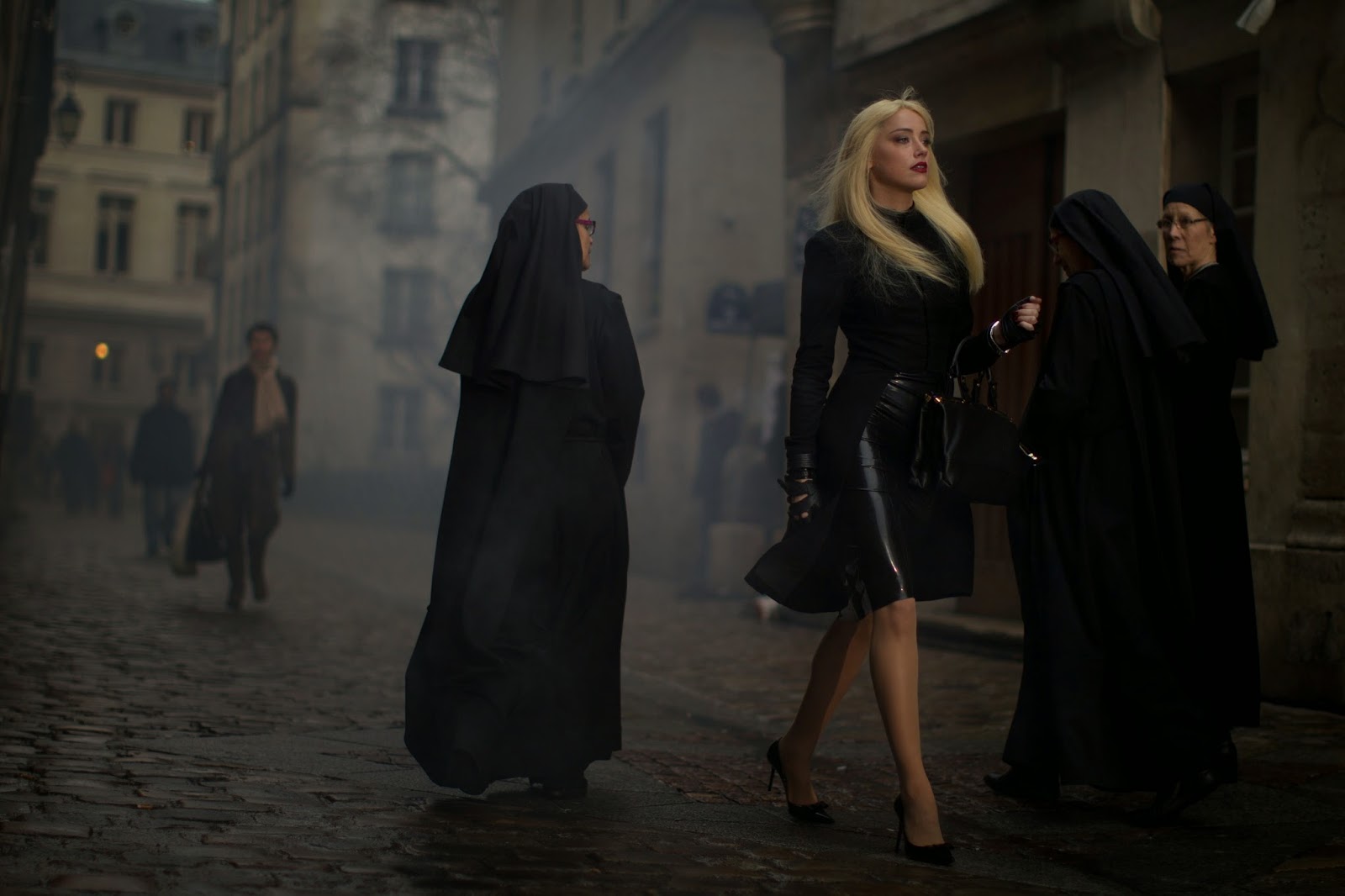 When Ethan accepts the CIA’s offer, this sets into motion the movie’s central conflict: balancing his spy life with his dad life. There are shades of Taken here, but unlike Maggie Grace (who at 24 played Liam Neeson’s teenage daughter in the first film like she was a developmentally challenged 10-year-old), actual teenager Steinfeld imbues her character with a credible teenage angst no matter how much Ethan (and the script) chooses to infantilize her. All of the usual antics occur. Ethan is late for the dinner he had promised to prepare (tuna) because he was doing spy stuff. Then it turns out Zoey hates tuna anyway. Ethan is interrupted on more than one occasion by a phone call from or about Zoey while he’s smack in the middle of torturing someone for information in his best Jack Bauer style. And, of course, Ethan uses his spy skills and contacts to delve deeper into his daughter’s personal life than she’d like. (Though, like Taken’s Bryan Mills, his overprotective instincts prove correct.) There’s also a running gag about him buying her a purple girl’s bike and wanting her to ride it when she’s of an age when she’d much rather ride the Metro with her friends or ride in her boyfriend’s car.

The thing is, hackneyed as they might sound, many of these scenes prove genuinely funny! The bike gag is a good one, since her refusal to ride it results in Ethan himself having to haul it around Paris with him while he’s doing his spy stuff. The bike even plays a starring role in the movie’s second-best action sequence, in which he waylays a motorcade with the aid of an explosive he sneakily applies to the undercarriage of an SUV with his shoe while passing it on the bike. More successful comedy comes from Ethan’s decision to stow a bound informant he was in the middle of torturing in his trunk when he’s called by Zoey’s principal to pick her up early because she’s gotten into a fight. How do you lecture your child about violence when there’s a loud, suspicious banging noise emanating from the boot of your car? 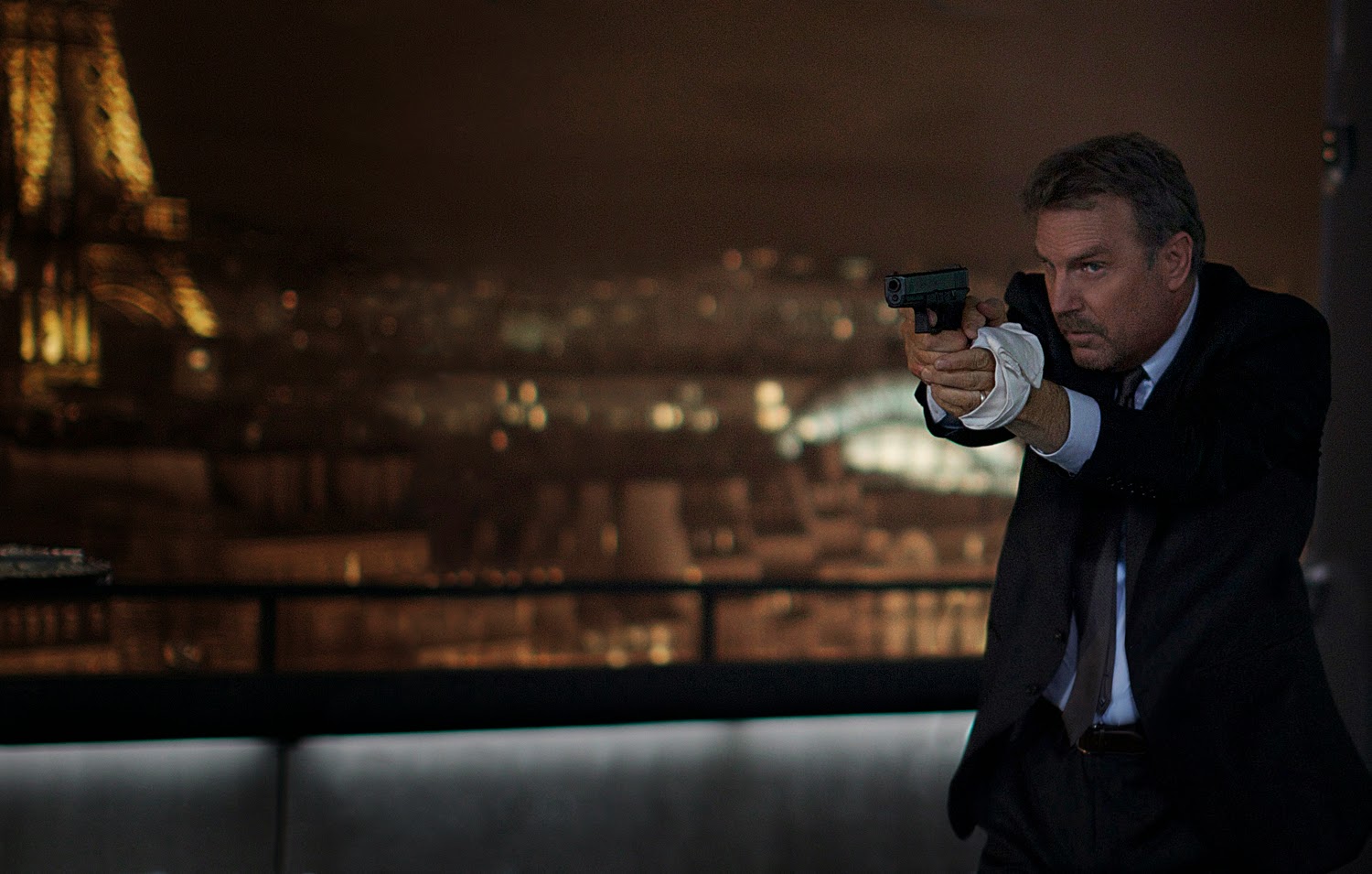 The dramatic aspects of his daughter bonding are somewhat less successful. It turns out she doesn’t want to ride a bike because, growing up with an absent father, she never learned how to ride one. (I guess her mother didn’t know how either?) This leads to a Butch Cassidy sequence of Ethan teaching his nearly grown daughter how to ride a bicycle. Then there’s that overprotectiveness. When he uses his espionage know-how to track Zoey to a rave when she had told him she’d be spending the night at a friend’s house, he arrives at this dangerous dance party just in time to save her from being gang raped. While we all like watching old spies beat up would-be rapists and I appreciated the sly nod to Costner’s famous Bodyguard role when he carries his daughter out of the club, I was less comfortable with the way the movie then passes off that potentially scarring incident as trifling for the sake of comedy.

The spy and family storylines come together in the third act as you knew they would—but thanks to pure coincidence rather than any ingenuity of plot. Half-baked or not, though, the ensuing action sequence is, like all the action in this movie, highly entertaining to behold. And that sums up the movie as a whole (and perhaps all of Besson’s neo-Eurospy flicks) as well: half-baked, but highly entertaining. It veers all over the place with no clear rhyme or reason, but I kind of wouldn’t have it any other way. It’s no Taken, but it’s a lot better than Taken 2. (And it’s also a vast improvement on McG’s last spy/comedy hybrid, This Means War.) Making the most of the combined talents of Luc Besson and McG (and if the more cynical among you are waiting for a punchline to that setup, be advised that I’m being entirely earnest), the action is top-notch (better than the vast majority of today’s favored incomprehensible fight scenes), and Kevin Costner makes a thoroughly compelling spy lead. Like Neeson, age lines and a grizzled demeanor suit him well, and I sincerely hope that this movie launches him on a similar late-career detour as an action hero.

I went and saw the film based on your review and if you know what you are getting into, a viewer might enjoy the hour and forty minutes of entertainment. It certainly is a Besson film only with a little more intentional comedic scenes than some of his other action films. This film does have a plot that you really don't want to analyze too carefully. So, sit back and enjoy and be glad you did not go see Pompeii.

Recently, a film by Luc Besson, that I purchased on blu-ray and thoroughly enjoyed is 'The Extraordinary Adventures of Adele Blanc Sec". If you are in the right frame of mind, you will have a lot of fun with this film.