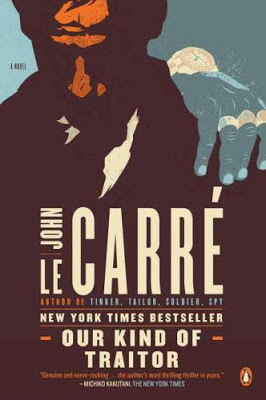 John le Carré's 2010 novel Our Kind of Traitor has taken a long journey from page to screen. Even before the book was published, we learned that Hossein Amini (who also contributed to, but wasn't ultimately credited on, Jack Ryan: Shadow Recruit) was penning the script. In May, 2012, Australian director Justin Kurzel became attached, and by November Ewan McGregor (Haywire) was rumored to star as British academic Perry, with Jessica Chastain rumored to play his girlfriend Gail and Bond alums Ralph Fiennes and Mads Mikkelsen circling the plum roles of British spymaster Hector and enigmatic Russian gangster Dima, respectively. Then in October of last year, Kurzel departed to direct Michael Fassbender in Macbeth, and that Parade's End director Susanna White was replacing him. Additionally, Mikkelsen had had to drop out due to scheduling conflicts. Would this film ever get made?

The good news is yes! In fact, filming began this week! But there have been further fluctuations with the cast. The only original member still involved is McGregor, who's still on board as Perry. While M and Le Chiffre may have moved on, there's still a Bond alumnus involved. The Hollywood Reporter reports that reigning Miss Moneypenny Naomie Harris will play Gail. Additionally, Stellan Skarsgård (The Hunt for Red October), Damian Lewis (Homeland), Jeremy Northam (Enigma) and Mark Gatiss (Sherlock) have all come aboard. (The latter two according to Variety and Yahoo! Movies, respectively.) What's unclear is exactly who's playing who.

All the trades seem in agreement that Skarsgård will play Dima, the Russian gangster who befriends Perry and Gail while they're vacationing, and recruits them to be his conduits to British Intelligence. But then things get murky. As far as I can tell, the only official word on Lewis's role is that he will play "a member of British Intelligence." Some outlets have taken that to mean that he'll be playing the book's most integral spook role, that of Hector, the role Fiennes had originally been circling. (Personally I always imagined Bill Nighy in that role.) The IMDb currently lists Lewis as spymaster Hector and Gatiss as his protegé, Luke. ("Little Luke," as he's frequently referred to in the book, which would make an odd match for the notably tall Gatiss.) But to readers of the novel, it would make more sense if those roles were reversed. With his spymaster experience on Sherlock, the 48-year-old Gatiss (easily capable of playing older) would make a credible Hector. And Lewis, at 43, would seem a more credible match for field man Luke. (It's also entirely possible that in the screenplay, Luke has the larger role since he ends up following the couple around Europe as they meet with Dima's entourage.) In the book, Hector is definitely older than Perry. Lewis and McGregor are the same age. Clearly, the part could have been altered (which certainly wouldn't be a first for a le Carré adaptation; a crucial role in The Looking Glass War comes to mind), but for the moment I'm betting that's how things shake out. So who does that leave Northam playing? Readers of the book, please chime in with your thoughts! The Ink Factory, the production company run by le Carré's sons, seems to like to play coy about who's playing who. We went through this same guessing game as the cast was assembled for Anton Corbijn's A Most Wanted Man.

No matter who's playing who, I'm very excited about this movie! Le Carré is still writing at the top of his game, and Our Kind of Traitor is a superb thriller. One gets the feeling that if le Carré classified his books by the same methods as Graham Greene, he might consider this one what Greene called one of his "entertainments." Which means that it should make a fantastic movie! Every bit as twisty, intelligent, and complex as we've come to expect from the author, it's also a gripping chase across Europe. According to Variety, Traitor will shoot for ten weeks "on location in London and its suburbs, as well as Finland, Bern, Paris, the French Alps and Marrakech." And lest anyone fear that the famous Hollywood trade had given up its classic turns of phrase since going online-only, I'd like to call attention to a tongue-twisting bit of Variety-speak. The trade describes this movie as a "contempo spy suspenser." Try saying that five times fast!
Posted by Tanner at 3:03 AM

According to Rotten Tomatoes, another LeCarre film 'A Most Wanted Man' has a release date of 7-25-14 with a current tomato rating of 91%. This film stars the late Philip Seymour Hoffman.

Looking forward to this film.

Thanks, Bob! As you probably saw, I finally got that posted. I saw it first thing in the morning and was incredibly excited, but ended up being so busy it took me all day to get it up. I'm really looking forward to it though! I really liked both of those books, and look forward to seeing how they translate to the big screen.