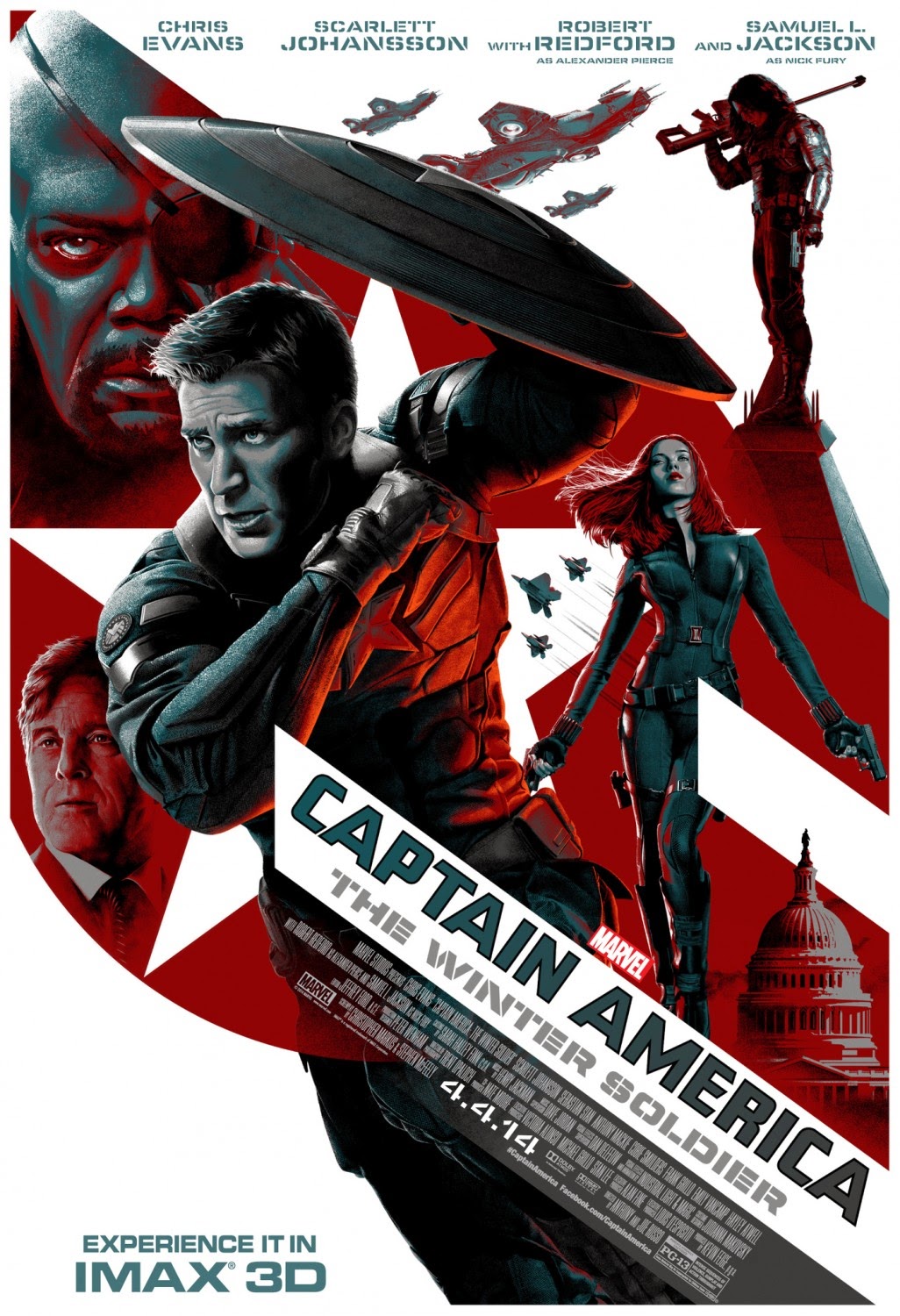 This is a short, spoiler-free review. This weekend I will post a longer review positively dripping with spoilers, because Captain America: The Winter Soldier is a crucial movie to discuss in analyzing shifting trends in spy entertainment. But the aspects that need to be discussed are the very ones which can't be until people have had a chance to see the film. Which, suffice it to say, all spy fans should. Whether or not you're a fan of Marvel movies or superhero movies or even saw the first Captain America film, if you're a fan of spy movies you'll find a lot to enjoy in Captain America: The Winter Soldier. And it packs a lot of surprises, so the less you know going in, the more you might enjoy.

Directors Joe and Anthony Russo, whose previous experience was limited primarily to television, promised a film inspired by the paranoid spy thrillers of the Seventies. And they definitely deliver on that promise. From the opening moments, which quite specifically pay tribute to Marathon Man, to the presence of Robert Redford, whose appearance in the film as a S.H.I.E.L.D. overseer is far from the movie's only nod to All the President's Men or 3 Days of the Condor (the spy movie Winter Soldier owes the most to), to a Henry Jackman score filled with mournful trumpet fanfares, that Seventies spy influence is everywhere. But so is a Strong Sixties spy vibe. Captain America: The Winter Soldier is as close as we're ever likely to come to seeing those classic Steranko Nick Fury, Agent of S.H.I.E.L.D. comics faithfully translated to the screen (yes, far moreso than on Marvel's Agents of S.H.I.E.L.D. television show or the Hasselhoff TV movie), and as in those comics, the nods to James Bond and The Avengers (and I'm not talking about the Marvel ones) are copious. In this film, you will see fantastical S.H.I.E.L.D. technology brought vividly to life and incorporated in larger-than-life action sequences. That's something I've wanted to see on screen ever since I first read those Steranko comics, and marveled at the way he heightened the already heightened world of 007 and U.N.C.L.E. as only comic books could. (Or so it seemed then.) But what's more impressive than merely accomplishing that feat is that the Russos manage to do so within the confines of a film that still feels fairly grounded and realistic. (Well, as far as superhero movies go, anyway.) 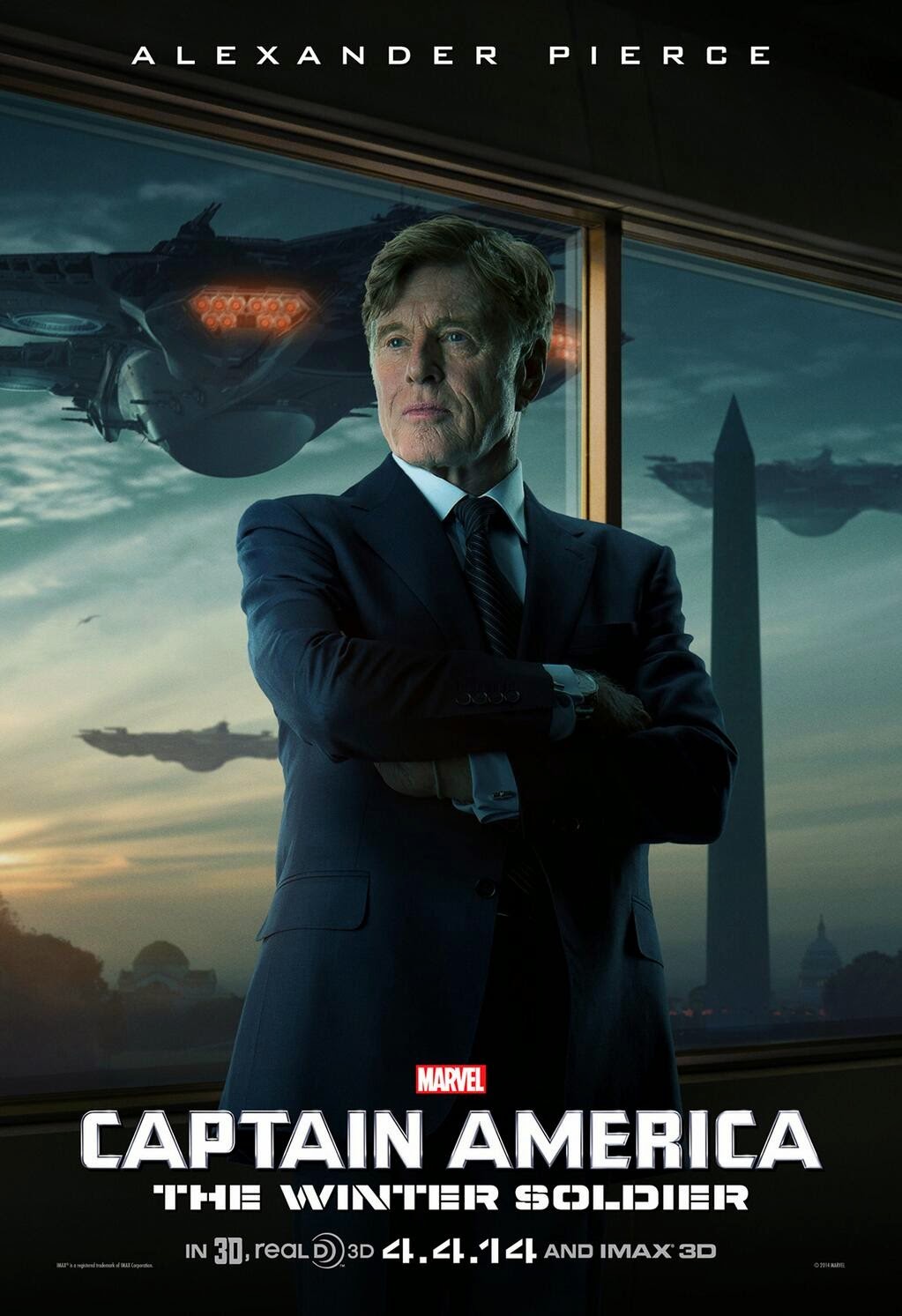 One of the many great things about how Marvel Studios has handled their cinematic universe is the way that they successfully incorporate totally different genres under the larger superhero umbrella. While these films all occupy one shared world, Thor: The Dark World is very clearly a fantasy film while the upcoming Guardians of the Galaxy looks to be a space adventure. And Captain America: The Winter Soldier is a spy movie, through and through. The hero, Steve Rogers (aka Captain America) works for a massive spy agency, S.H.I.E.L.D., and though he dons a costume for his missions, he spends a surprisingly large chunk of the movie without it in order to blend in undercover. Taking its cues primarily from Ed Brubaker and Steve Epting's truly terrific run on the comic book, this is Captain America as a Tom Clancy techno-thriller. Besides Cap himself being an agent of S.H.I.E.L.D., there are also spotlight supporting parts for the Marvel Universe's best known spies. Nick Fury, played once again by Samuel L. Jackson, gets his largest role to date in a Marvel movie, and even gets his own car chase. Black Widow (Scarlett Johansson reprising her Iron Man 2 and Avengers role) also enjoys a significant amount of screen time. And S.H.I.E.L.D. agents familiar to comic book readers pop up everywhere, including Maria Hill (Cobie Smulders), Agent 13 (Emily VanCamp) and Jasper Sitwell (Maximilliano Hernandez). Not all of them are treated with particular fidelity to the comics, but it's still cool to see them on screen.

Despite taking so many cues from spy films of the past, the most remarkable thing about Captain America: The Winter Soldier is that it ultimately proves to be the most contemporary espionage thriller imaginable, a spy film very much of and for our time right now. In this respect it echoes Skyfall to some degree (as well as the Bourne movies), but still maintains its own strong individuality. But that's what I have to discuss later, behind ample spoiler warnings. The purpose of this review is just to get the word out to any spy fans who weren't yet convinced by the non-stop TV spots that Captain America: The Winter Soldier, despite starring a superhero, is very much and unequivocally a spy movie, and one likely to strongly shape the direction the genre takes in the remainder of this decade. So go see it... then we'll talk.

Note: Please keep comments on this post spoiler-free as well. Once I post that spoiler-filled follow-up review, that will be the place to discuss spoilers.
Posted by Tanner at 2:57 AM

Saw the film today and thoroughly enjoyed it. Nolan's Batman films, for me, are the benchmark for superhero films. This one and the original Iron Man rank a very close second.

I agree with you in that this film has more of a spy thriller vibe to it than your typical Marvel superhero film. And that is a good thing for me. (The trailer we saw to the new Spiderman film left me cold).

Highlights for this film for me include a great score by Jackman and three strong performances by Evans, Johansson and Mackie. Unlike The Avengers, this film's script actually lets Johansson create and develop the character. Also, there is a very touching scene when Rogers visits his old girlfriend, who now has aged and is not in good health.

Many reviewers are saying this is the best film that Marvel has made and I can't say I disagree with them.

On another note, I received my Flint films from Twilight Time, and it was interesting and fun to see your comments on the films. Good job!

I thought CA:TWS was impressive from start to finish; a very confident movie. Superb action pieces and strong performances throughout. Chris Evans is perfect casting - he projects decency at all times. Like you, I loved all the Sterankoesque technology and stunts, and I got a proper fanboy thrill when Cap and the Falcon are first seen together - they were the team in the comics when I first discovered them in the 70s.
It's a thought-provoking film; I'm looking forward to your more extensive review.