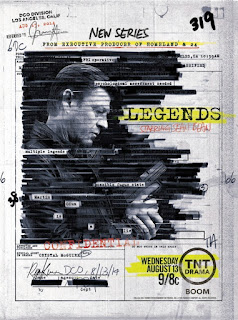 For TNT's highly compelling but under-seen spy series Legends, based on the Robert Littell novel and starring Sean Bean (GoldenEye), the road to Season Two has been nearly as rocky as the impossibly rocky road to Season One. (And that prolonged development period saw the drama series take three years, two networks and two stars to reach the screen!) The renewal came harrowingly late in the game (last December, months after the first season's cliffhanger finale aired), and we learned in March that the second season would undergo some fairly major changes from the first one, in showrunner, format, location and cast. Ken Biller (Legend of the Seeker) took over the helm from David Wilcox (though Homeland and 24 mastermind Howard Gordon remains Executive Producer), and first season co-star Morris Chestnut went from regular to recurring.

Today, Deadline reports that the rest of the second season cast has been rounded out with a more international flavor, and that the action will shift to Europe. (That part's not too surprising, given the events of the first season finale.) According to the trade, British spy vet Ralph Brown (The Assets, Agent Carter, TURN) will play Terrence Graves, "a sophisticated, wry MI6 Intelligence Officer ... both personally and professionally compromised" beneath his "polished exterior." Czech actress Klára Issová (Transporter: The Series) will play Ilyana Crawford, a refugee from war-torn Chechnya and a smart, stubborn survivor who will do whatever it takes to remain one. Bean returns as Martin Odum, "an undercover operative who has learned he isn’t the man he believed himself to be. On the run for a murder he didn’t commit, Martin searches for his true identity, following a trail that takes him to London and the European continent, where he discovers a dark and violent past that holds the key to his future survival." Season Two is currently shooting in Prague and London. TNT recently pushed back the second season of Legends from Summer (where it debuted last year) to fall, where it will be paired with the network's newest action spy show Agent X, starring Sharon Stone.
Posted by Tanner at 3:07 PM